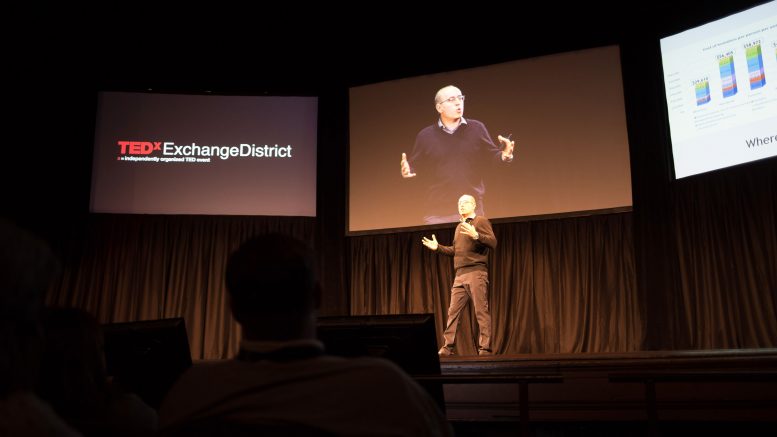 Jino Distasio talks about the costs of poverty and his research on finding ways to prevent it at the TEDxExchangeDistrict event Oct. 18.

The group TEDxExchangeDistrict held their first event at the Pantages Playhouse Theatre Oct. 18.

The event, chaired and curated by Joseph Ranseth, invited both local and international speakers to address their audience with a specific theme in mind: “change through exchange.”

The idea of creating an opportunity for collective engagement using the TEDx platform came after Ranseth, while attending the TEDGlobal>Geneva event, was inspired by an organizer whose job involved working at the mayor’s office in Milan.

“He told me that as a mayor’s office, they’re looking at two cities across the globe for models of progress and growth,” Ranseth said. “One was a city in Japan. The other, Winnipeg.”

Unlike other TEDx events, which tailor their choice of speakers and topics to a vetted audience, TEDxExchangeDistrict was made accessible to the general public through ticket sales.

The event centred around a three-fold mandate: to elevate the quality of life in Winnipeg by identifying issues affecting the city, such as homelessness, then proposing effective solutions to those problems; to reorient the public dialogue to things that matter; and to put Winnipeg on the world stage by continuing to hold events such as TEDxExchangeDistrict.

“As a TEDx event organizer I wanted to see something bigger, something that would serve our city and help elevate it in a new, transformative way,” said Ranseth, adding that this includes “Saying: ‘What can we do to elevate our city and make it even better, how can we unite people in our city with a common vision and a future that will mobilize us to action?’”

The focal point of the event’s program was to foster a discussion on some of the issues people in Winnipeg face within their communities.

To do this, Ranseth’s team met with community members and stakeholders throughout the year to get a grip on what constitutes important issues that need to be addressed.

This resulted in a 45 topic shortlist that was then curtailed to seven topics. This included a discussion on concerns regarding Canada’s healthcare system, addressing the pressures millennials face in the workforce, and how to prevent homelessness for people living with mental illness and addiction in Winnipeg.

One important precept championed by TEDxExchangeDistrict is that change for the better does not just happen from the top-down or the bottom-up. Instead, positive change happens best when the top-down and bottom-up both intersect. The mobilization of voices towards a specific end or a set of goals best illustrates a translation of this intersection.

A closer look at TEDxExchangeDistrict

After closing remarks, Ranseth sat down to discuss the TEDxExchangeDistrict vision and the importance of an intersection between a top-down and bottom-up approach to change.

The Manitoban: How was TEDxExchangeDistrict conceived?

Ranseth: I’ve been involved in the TEDx community for number of years. But after going to Geneva, Switzerland, for the TEDGlobal Conference about a year-and-a-half ago, I came back inspired with a vision to do something much more than just an event and saw that the TEDx platform was a beautiful way to present ideas worth spreading to the community and give people opportunity to take action.

M: What were some difficulties faced in the last year-and-a-half? How did you overcome them and what advice do you have for student groups who plan on holding similar events?

R: We did a lot of things right but we also had to learn a lot of things along the way. And one of the things that we learned by experience is that it’s easy to get people inspired by sharing the inspiring vision, by painting that big picture. But then, you have to keep people engaged.

People want to be part of something bigger than themselves and when they hear a vision, when they hear the story and see something big, they’ll connect to it. But in order to stay connected, you need to make sure that they have something to do. […] We did have an experience of having a lot of people who wanted to help and not having clearly defined tasks and ownerships for them, so that was one of them.

And also realizing that getting clear on what you need done and what the skills are to do that. Just because someone wants to help doesn’t necessarily mean it’s the right person for the job. We learned that it’s really important to have people that are excited but who also can use their skills and strengths in a way that makes sense to the team.

M: Why is an intersection between a top-down and bottom-up approach vital?

R: I think the Civil Rights Movement is a perfect example of that. […] A lot of what we saw happened in the 60s under Dr. King was the result of a lot of people in the community rallying around grassroots efforts: boycotting the busses, marching, and all sorts of things. That happened from the bottom.

Finally that helped get the White House to pass the [Civil Rights Act of 1964]. So there’s the top down that happens. But just because a law has passed doesn’t mean that all of a sudden everyone has equal rights. […] If everyone felt really passionate about a certain topic but the policy didn’t support it then you have an issue. So it really requires both, at a personal level as well a policy level.

Our program obviously included speakers connecting to both angles of that in a hope to help people feel empowered to the task but also know what tasks they can do in our world to match that.

M: When will we be seeing you again and what’s the vision moving forward?

R: Hopefully this time again next year. We would love in year two of the event to come back and say: “Because of you, the audience, here is what has happened.” And to com- ment back on the progress for each of the ideas and action plans that was created here today. To me that would just be the ultimate joy and victory to say that this was more than just a day of inspiring speakers but that it resulted in people taking action and creating change through that exchange that we saw today.