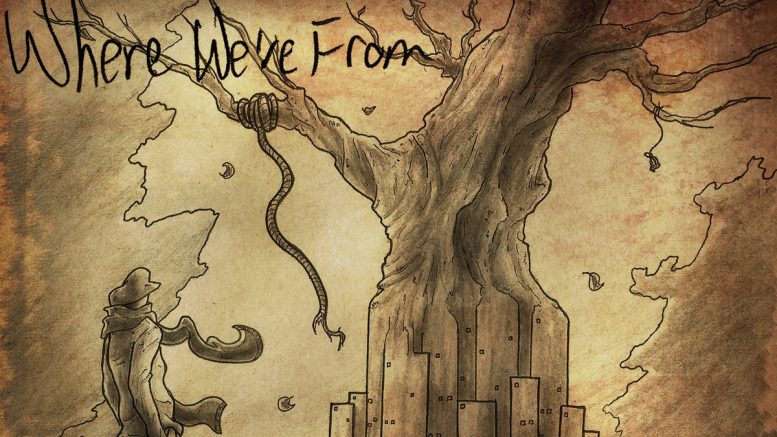 Nic Dyson’s second full-length release and third album, Where We’re From, was released in June 2017 following a self-recorded EP, Dreaming Under a Broken Tree, in 2012, and debut LP, This One’s For You, in 2014. Where We’re From was written between the spring of 2014 and Summer of 2016, and the album’s sixth track, “Vertigo,” landed Dyson a spot in the regional finals for CBC’s Searchlight 2017 competition.

Dyson is an acoustic singer-songwriter who is not afraid to go to those dark and lonely places that people tend to push aside. He takes listeners to vulnerable, relatable places in a manner that is both brutally honest and poetic. His scratchy, yet honeyed voice and calming guitar picking beckons forth hidden emotions that have gathered dust over time. As they come to the surface, your body reacts with sinking in the heart, turning in the mind, a lump in the throat, and a tear to the eye.

“Place and Time” is a heart-wrenching song about what could have been. The cyclical patterns of thought and questioning that come from meeting someone under impossible circumstances that haunt people are woven throughout the song, and play with the heartbreak of the painful feeling of wondering what could have been. The love he has for the person he will never have breaks through the lyrics of the sweet and sad tale: “Well, I hope you find what you’re looking for in someone else’s eyes, under someone else’s skies, I just don’t know why it can’t be mine.”

“A Song for Insomnia” takes a step away from the typical solo acoustic or simple accompaniment, by introducing a full band. This punk tune has the same lyrical vibes as the rest of the album, but is definitely something different, sandwiched as it is between two sweet, sad lullabies. It is refreshing but at the same time slightly foreign to the overall style of the album. The same type of tune is introduced later in the album with “It’s Not 2012 Anymore.” A nice common ground between the two styles Dyson is exploring occurs with “Hypnagognia,” combining the indie folk vibe with a full band in a way that is much more sympathetic to the album as a whole.

Dyson’s heart and emotions are an open book on this album, and it is quite striking and beautiful when he sticks to the classic acoustic tunes that he is known for. The songs that feature the full band are a potential glimpse at a new avenue and type of sound that Dyson can go after in the future, either with full band accompaniment on his slow folk tunes or possibly go further into the punk genre.