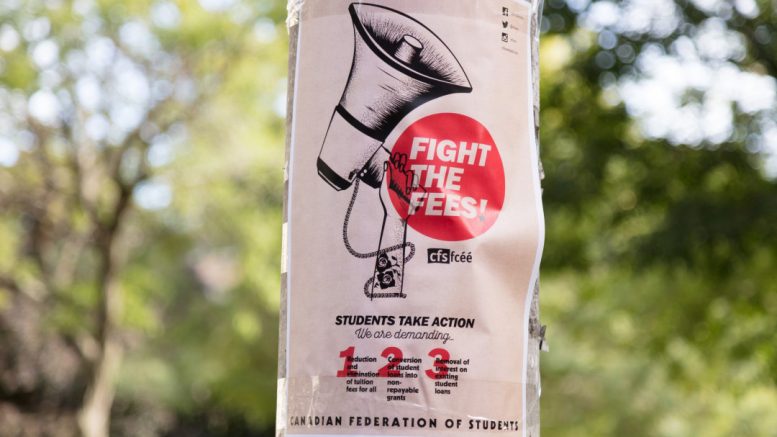 Summary Report reveals hidden CFS bank account: over 260,000 dollars have been unaccounted for. Photo provided by Nathan Chan — The Varsity (University of Toronto)

By Josie Kao — The Varsity (University of Toronto), with files from Shaden Abusaleh September 20, 2017

In advance of the Canadian Federation of Students’ (CFS) semi-annual General Meeting in June, the organization released a forensic review summary consisting of a summary report and summary audit of a hidden bank account it operated, which was exposed in 2014. The CFS has declined to release the full forensic review.

The summary, conducted and published by accounting firm Grant Thornton LLP, revealed that a total of $263,052.80 in unauthorized deposits and $262,776.13 in unauthorized withdrawals were made between July 2010 and December 2014.

According to the forensic review summary, the deposits consisted of “funds intended for different parts of the organization.” These include payments for “services and advertising, refunds, return of retainers from law firms and payments relating to the national health plan as well as small payments for International Student ID Cards.”

There were five recipients of the unauthorized disbursements, “two of whom, are former employees of the Federation, a further individual, one law firm and a consulting company,” as the summary states.

According to documents obtained by The Varsity, CFS National Treasurer Peyton Veitch wrote to law firm DLA Piper LLP requesting advice on whether or not to release the full review. The firm recommended that the CFS “decline to disclose the Forensic Review” for a number of reasons, the foremost of which had to do with a federation bylaw concerning access to information.

The bylaw in question states, “Each member of the Federation is entitled to have access to all information and official documents concerning the operations and activities of the Federation and of the National Executive.” DLA Piper concluded that “the Bylaw is not sufficient to compel disclosure of the Forensic Review.” The firm argued that the audit does not clearly constitute a document that concerns the operations and activities of the CFS.

“It is not a customary or routine document prepared in the course of the operations [. . .] but rather is an exceptional document prepared for a very specific purpose. As a result it is not the type of information or document reasonably contemplated for disclosure under the Bylaw,” reads the firm’s response to Veitch.

University of Manitoba Students’ Union (UMSU) president Tanjit Nagra said that learning the details of the account is “very alarming.”

“Seeing the expenses, it was literally going to benefit ex-staff and some student leaders at the time [that have been] involved in the organization,” Nagra said.

“I think the fact that there was a hidden bank account even found, I don’t know how that’s even possible,” she added. “To me, it’s very alarming because, at the end of the day, these are student dollars.

“It’s one thing to not spend them wisely, but for them to be literally going into the pockets of people that are trying to benefit on the backs of students is corrupt and awful.”

Nagra said that with CFS in the past, lively debates have turned into personal attacks against her.

UMSU demanded an apology from CFS in December, claiming that its members verbally harassed Nagra. The harassment allegedly took place after UMSU brought forward a motion that would amend CFS’s policy on international students.

“I personally feel as though I have been personally attacked by this organization,” she said. “Hence why it is very tough for me as an individual to go into those settings and to try to advocate for my students because when I do, I get shot down.”

A motion to “continue [the] current relationship with Canadian Federation of Students,” moved by Aboriginal Students’ representative Noah Wilson, was defeated at UMSU’s regular council meeting in August. A further motion moved by the St. Paul’s College Student Association representative to “hold a plebiscite on continued CFS Membership” was referred to the UMSU governance committee.

Nagra said she does not know what UMSU’s relationship with CFS will look like in the future.

“I’m really looking for leadership from our council at this point,” she said. “I’m here to be a spokesperson for students, but I need them to tell me what to do on this one. I don’t think it’s my job to decide whether or not we’re continuing our relationship with the CFS.”

While it does not go into specifics of the finances and those involved, the Grant Thornton summary does explain that the original purpose of the bank account was to place a “security deposit for a CFS-S subsidiary, Travel CUTS,” which is a travel agency that the CFS used to co-own. The transactions relating to the security deposit concluded on May 6, 2010. The unauthorized transactions began on July 14, 2010.

As described in the summary, former CFS executives interviewed were unaware of the account before receiving a letter from CIBC in 2014, which alerted them to its existence. All known CFS bank accounts have been Scotiabank accounts.

A source close to the matter says that, though some of those involved were fired, it seems that not all of the people responsible have faced repercussions.

Veitch was not available for a full interview on the subject but released a short statement to The Varsity, which said that the CFS “set aside a great deal of time for questions and answers,” at the general meeting.

“We’re interested in moving on from this issue and focusing on the campaigns and services that make life better for students,” Veitch said.