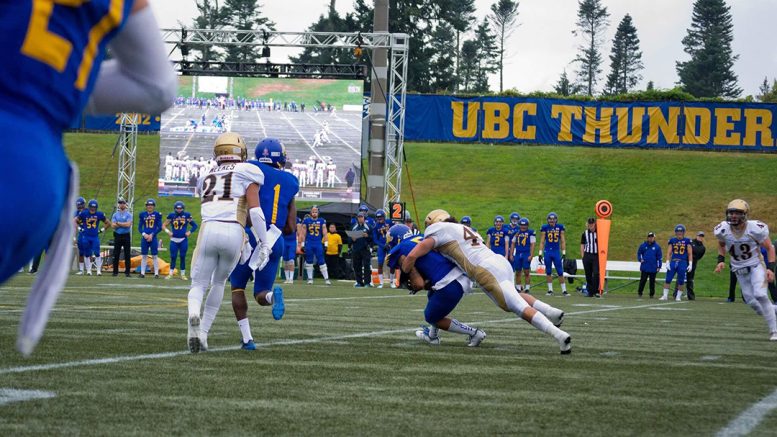 Bison middle linebacker James Mau is the type of person who lets his play do the talking.

It’s rare that you’ll find him boasting about his accomplishments as a football player, of which there are many. Perhaps the best example of Mau’s humble demeanour occurred when asking about his high school football days back in Ottawa

“I actually played on three different teams every year in high school. It was pretty intense,” he said.

“I played in the Ontario Varsity Football League summer league, and then I would play in high school and club [in the fall]. I’d have high school practice, and as soon as I was done high school practice, I’d drive over to my club team and practice there. I actually don’t know how I did it, I was just a kid at the time so I was pretty indestructible.”

With that much football in his life, it should come as no surprise that Mau was able to get a few different university offers. He eventually settled on Manitoba for the 2012 campaign, where he redshirted  his first year.

For the next four seasons, Mau made his mark on special teams as well as on defence, and was an integral part of the 2014 squad that upset Calgary to win the conference championship.

“The Hardy Cup year was really special,” Mau said. “We had a lot of characters on the team, which was pretty cool”

From 2014 to 2016, Mau lived with former teammate and current NFL defensive lineman David Onyemata, which he said had a big impact on him both on and off the football field.

“His work ethic was pretty crazy. He was the first guy up in the morning, and the last guy to fall asleep,” Mau said. “He was just always working, so that carried on to me.”

Mau said he worked harder than ever this summer in particular, knowing that there were two open linebacker spots available for the 2017 campaign. His dedication paid off, as he earned the starting middle linebacker spot.

“I walked into training camp with a lot of confidence, just knowing that I knew the playbook better than anybody else did because I’m a fifth-year guy,” Mau said. “I really worked hard this offseason, on and off the field and dedicated a lot of time to football.”

While the team hasn’t gotten off to the start it wanted – the Bisons are 0-3 – Mau has shone individually. His 19 tackles leads the team and is ranked third overall in the conference. He has also collected two fumble recoveries and a sack.

Mau remains humble when talking about his early season success, focusing not on what he has done well so far, but on what he hopes to improve upon.

“At some points, I wasn’t as aggressive as I wanted to be, but there were other points where I was overly aggressive,” he said. “The first game I made a few mistakes, but I’m definitely improving.”