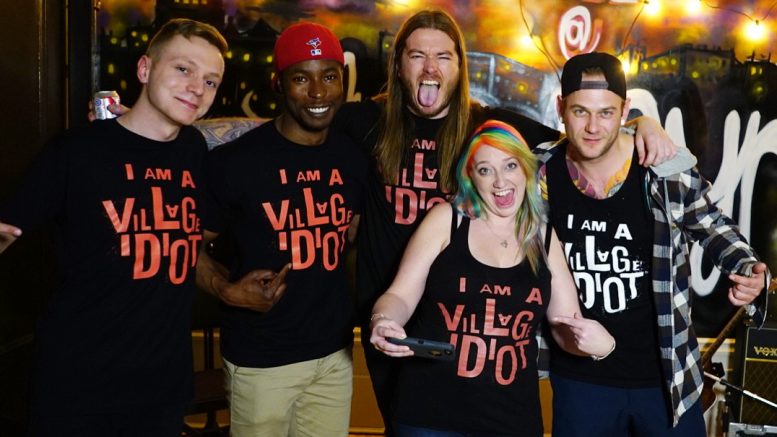 Members of The Village Idiots

Over the past year, The Village Idiots have been working hard to maintain and grow the fan base for their weekly installment of Live at the Roslyn.

Every Wednesday, creators Rylie Saunders and Kevin Repay set up their living room in the infamous Roslyn Square building with Facebook Livestream and broadcast local bands for free to anyone who has access to Facebook. Last season was met with tremendous positive feedback, with over 25 episodes of Live at the Roslyn and around 25 episodes of Sunroom Sessions,  a new installment that features solo acoustic acts in the sunroom of the same apartment.

The idea behind the show is simple: support local music.

“What we are doing aims to increase the exposure of these bands [and] artists and gives fans a chance to get to know our local artists better, for free and in a convenient way,” said Saunders. “Why not idolize someone homegrown with just as much talent, save some money in doing so and help make the next biggest artist in the world be from Winnipeg.”

“We’ve been huge supporters of the Winnipeg music scene for 15 years and are blown away by the talent this city has” Saunders added.

He noted that people don’t always know what local talent Winnipeg actually has and end up idolizing bigger bands that are featured online and on the radio instead of looking in their own backyards.

“You can see local artists for free or up to $15 and can be up close to the stage and have a much better experience” he said.

Another thing to note about Live at the Roslyn is the service it provides to people with lifestyle conflicts and accessibility concerns related to viewing live music. People with children, evening and weekend jobs, fans and supporters across the world, and people that can’t afford to regularly see live shows are all given the opportunity to see what local music has to offer.

A variety of accessibility concerns, including physical access to shows, noise levels, and concerns with large crowds are taken into consideration. “The comfort with being able to watch from anywhere, on your own terms, is really great,” said Repay.

“There’s so many reasons why people can’t make it to live venues, so it’s nice to be able to offer an alternative, to be inclusive.”

The Village Idiots are set to air the first episode of the new season of Live at the Roslyn on Nov. 1, with applications available until Sept. 28  for bands interested in playing a live set. Over 100 bands so far have applied and the Idiots want to make the show as good as it can possibly be by upping their production level game.

“First season started with an iPhone 6, two people, and idea,” said Saunders. “It quickly transitioned to a studio set-up in our living room with seven team members and production equipment making that idea truly come to life.”

New to this season will be that every band performing on Live at the Roslyn will also be featured on Wheeler in the Morning for a performance and interview. Local support doesn’t stop there: Torque Brewing is the show’s beer sponsor, and Nuburger will be providing food.

The Village Idiots are holding a fundraiser on Sept. 29 at The Pyramid Cabaret to raise money in order to pay for new equipment to create the best quality production, video, and sound for the upcoming season. Thus far, the show has been entirely self-funded, and the group is hoping to produce a more impressive product to showcase local talent. “We want to take it to the next level production-wise,” Saunders said.

Live at The Roslyn Season 2 starts on Nov.1 and airs every Wednesday at 8pm

Tickets for the fundraiser are $20 each or 2 for $30 (in advance) and can be bought from The Village Idiots or online at https://gofundme.com/4c51in4