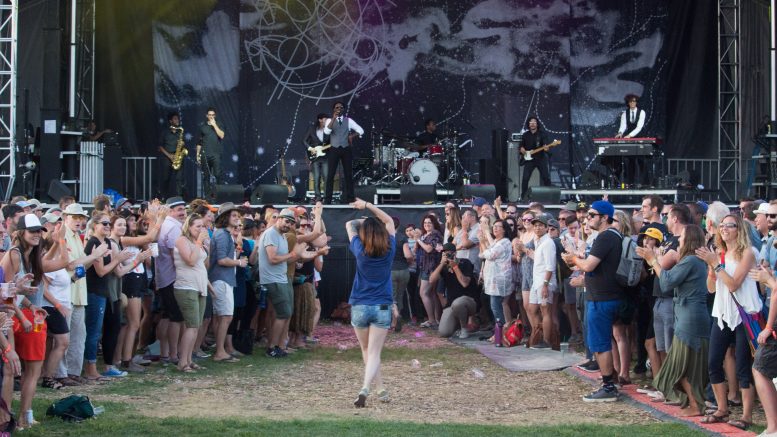 Aloe Blacc has the Interstellar crowd on their feet and hanging on every word.

Leading up to Interstellar Rodeo, my mind is filled with cynicism.

You guessed it, I am excited to witness Father John Misty’s heroically large ego. Really, I can’t stop singing his songs. Josh Tillman is a modern poet, perfect for the vulnerable, anxious, self-righteous reflectors of our time. It is with great pleasure that I share my experience at the festival on Misty here, but I can’t leave out the obvious music royalty that is Beck, Broken Social Scene, Aloe Blacc, Shakey Graves, and local music labourers Figure Walking .

Upon arrival, the atmosphere was quite typical for a music festival: hot sun, blankets on the earth, belly buttons, compostable cups full of local goodness. Bronuts and Pop Cart  are casually hanging out just right of the central adult beverage bar. The popsicles may have been my favourite artist to take in.

Situated at The Forks, between the skate park and the Red  River, the festival directly showcased the Canadian Museum for Human Rights and the Provencher Bridge, which extended out above the main stage.

Interstellar Rodeo is an industry festival, catered to music enthusiasts on a large scale, but accessible, brand savvy, and casual enough that the locals who may not have dived head first into Broken Social Scene are still willing to shell out $8.00 for a single, but local, beer. Or $6.00 for an unqualified grower’s premium cider. And take meals all weekend from the seven or eight hot and ready food trucks at the East side of the grounds.

The festival ’s mantra, “Just be awesome,” seemed to be an adorable way of saying “Don’t mess this up for everyone” and it must have worked. The MC spoke it all weekend, coercing the crowds into doing exactly such, noting that Interstellar makes a larger point than most festivals to preach safety. Which is pretty awesome of them.

The festival didn’t focus much on the millennial crowd, with a high ticket cost for all three days. A young music lover could experience three locally run smaller scale festivals for about the same cost. An idea that may help in that area would be adding more of a market for artisanal items and goods, as Winnipeg has no shortage of young entrepreneurs. The Forks does have these markets available just over the hill but bringing them in could incorporate more of a community feel into their festival vibes.

As someone who has neither witnessed Beck’s live show prior, nor really dug into his repertoire of eclectic hits, I can say that Beck mesmerized me. His show was hypnotic. With ear plugs to hear better and  sunglasses to combat the insane light show, I swayed into the illustrious songwriter’s set with unreasonably high expectations.

At 47, Beck put on an incredible performance, full of energy and the kind of aged artistry one would expect from the California born superstar. Of course, he played 1994’s  “Loser,” but the new music is what I was happier to experience. Beck made a good point of playing down-tempo folk songs between multiple funk-hip hop masterpieces. The set made for an electric vibe throughout the festival grounds.

Sunday of the three-day music festival may have been my favourite, solely due to the fun-loving, outrageously soulful entity that is Aloe Blacc. Dressed to the nines, a full band of extremely enthusiastic musicians took to the stage with a different mantra. They arrived to funk it up and the audience was ready.

The love was pouring out of Aloe Blacc, who was so gracious and thrilled to be performing, preaching love to all of us through every idiosyncrasy. The keyboardist, a tall, slender, curly-haired individual, guided the band through layers of riffs and downbeat gold. Blacc interacted with the crowd constantly, prompting us to sing every second or third chorus. He even had the entire crowd split in the middle to form an aisle and dance one by one from the back of the crowd to the front of the stage. Hundreds obliged and tried out our most unique moves.

Interstellar went off without a hitch this year, and I am happy to have attended.

While it may not have the grassroots movement or the questionable late nights of other Manitoban festivals, it does have a good local food, central location, progressive logistics and hefty headliners.