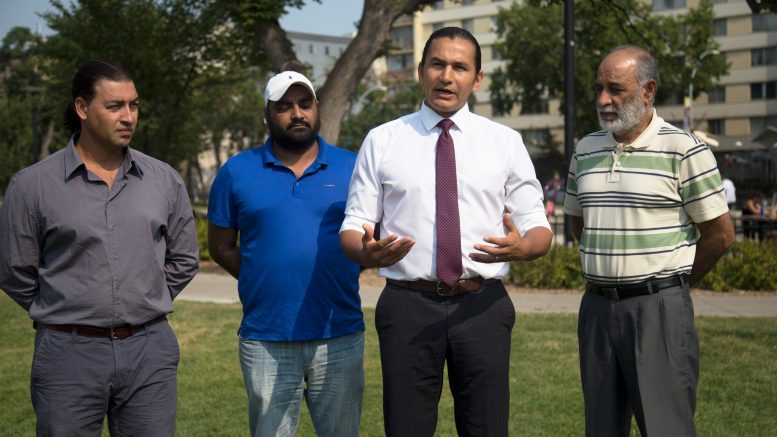 “We know that immigration is responsible for a big part of the growth in our province – economic growth and population growth,” he said.

“And in order to keep our province on a productive path and on a healthy growth curve, we want to make sure that we are bringing in many, many immigrants to our province.”

The MPNP encourages immigration to Manitoba based on employable skills, such as language and labour skills. The program only focuses on the selection of “economic immigrants” who can prove long-term employability or who can demonstrate their ability to start a business in Manitoba.

Overseas applicants and international students interested in applying for the program are assessed through a point system. Points are added based on age, education and training, work experience, and language skills.

Approved nominees then begin the process to obtain a permanent resident visa and then Canadian citizenship by applying through Citizenship and Immigration Canada.

In November, premier Brian Pallister announced changes to MPNP that require approved nominees pay a non-refundable $500 fee, which came into effect in May.

Calling it “an unnecessary impediment to immigration,” Kinew promised to repeal the charge.  “In some cases, it actually acts to discriminate against people without resources who have the work ethic, who have the drive, who have the smarts and the willpower to succeed in our society,” he said.

“And we should be welcoming them with open arms.”

Kinew projected the annual cost of scrapping the $500 application fee would run $2 million.

Kinew also promised to negotiate with the federal government to focus on reigniting  the family reunification stream of the provincial nominee program for Manitoba with the hopes of encouraging more newcomers to remain in Manitoba.

“Changes that the Pallister government have made focus exclusively on bringing in, you know, people based on employment and ability to start a business,” Kinew said.

“We also want to say that having a family member here and being able to join your family, your community here, should also be a reason identified by the Manitoba government to come here.”

This would, Kinew said, be a part of an effort to retain people in Manitoba for the long term.

“We want people to stay here and make their lives here for many, many years, even for many generations,” he said.

Kinew added that part of his broader immigration strategy is working toward increasing and improving settlement services, such as skills training and English language education.

How much is too much?