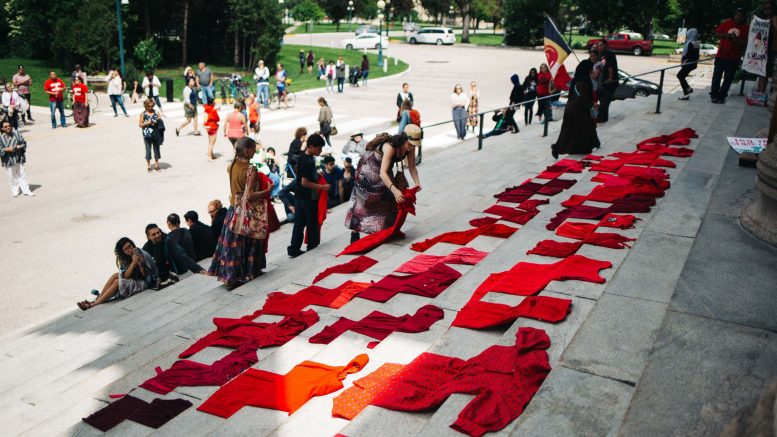 While Canadians celebrated 150 years of confederation on July 1, a handful of events in Winnipeg were meant to draw attention to this continent’s much longer – and complicated – history.

The Winnipeg chapter of Idle No More organized an event branded “Resilience 150” to acknowledge and honour 150 years of Indigenous resilience. Friends of Shoal Lake 40 hosted their own event, “Unsettle Canada 150,” in the spirit of reconciliation.

Idle No More is a Canada-wide movement that mobilizes to uphold Indigenous rights to sovereignty in order to protect the land and waters. The event aimed to encourage contemplation on 150 years of colonial history and the realities of Indigenous peoples across Canada.

Sadie-Phoenix Lavoie, co-founder of Red Rising Magazine, student at the University of Winnipeg and a speaker at the event, said “for me, decolonizing, as an Anishinaabe, is going back to what it was like before colonization, like in terms of my teachings, my mind, and my spirit. It includes unlearning a lot of the assimilation that has happened.”

Lavoie said decolonization within society means learning Indigenous perspectives directly from the Indigenous peoples of Canada, and changing an oppressive system that incarcerates and criminalizes indigenous people for defending the land.

Indigenous groups refer to North America as Turtle Island and Lavoie said the event was meant to pay tribute to their relationships with the land.

The Truth and Reconciliation Commission, which investigated Canada’s residential school colonial legacy, issued more than 90 “calls to action” in 2015 it said are required to move toward reconciliation and build meaningful relationships between indigenous and non-indigenous Canadians.

“It is a huge list but very minuscule if you look at the overall impact of what has over the last 150 years,” said Lavoie.

“I don’t think that the government is authentic enough in acknowledging the resilience of Indigenous people across Canada and understanding that they have no power over us – and that there is power with us,” she said.

Lavoie said the government has failed to respect Indigenous rights internationally by failing to implement the United Nations Declaration on the Rights of Indigenous People (UNDRIP).

Ottawa’s decision to spend $500 million on the Canada 150 celebration is “more symbolic than meaningful,” she observed that “it took decades to meet the gap on education funding for indigenous people on reserves.”

“It is frustrating because they [the federal government] would rather spend half a billion dollars for one day on celebrating colonialism and genocide rather than uplifting and honouring the relationship with the Indigenous peoples of Canada,” Lavoie said.

Lavoie said there is a lot of catching up for new immigrants – and Canadians in general – to do to educate themselves on Canada’s relationship with its Indigenous peoples.

She said they are getting a one-sided perspective from the government and forming stereotypes around Indigenous peoples as a result, adding that “they need to acknowledge the fact that they are guests here.”

“There are a lot of great things Canada has done – for example, universal health care – but we need to understand that notions of taking care of the community comes from the Indigenous peoples of Canada,” she further added.

Towards the end of the event, Winnipeggers left red dresses on the stairs of the Legislative Building to commemorate the lives of missing and murdered indigenous women.

A little bit of “unsettling”

Friends of Shoal Lake 40, a collective of students, faith-based groups, community organizers, and non-profit organizations, hosted an event called “Unsettle Canada 150” in the spirit of reconciliation to explore settler and Indigenous relations through spoken word and digital storytelling at Augustine United Church.

The group displayed artworks encouraging people to reflect on Winnipeg’s relationship with the Indigenous community that provides the city with its water supply. Shoal Lake 40 has been under a boil water advisory for the past two decades.

The group tabled educational materials such as copies of UNDRIP and the Truth and Reconciliation Commission’s “Calls to Action,” using Canada Day as an opportunity to educate the public about the impacts of colonialism.

Kathy Moorhead Thiessen, spokesperson for the Unsettle Canada 150 event and a Friends of Shoal Lake 40 member, stated that Canada’s 150th birthday has been highly publicized without a sincere acknowledgement of the history before confederation.

Thiessen said Friends of Shoal Lake 40 aimed to force settler Canadians to think about the indigenous people who have been on Turtle Island for so long, welcomed settlers with open arms, and have been treated brutally since then.

“Shoal Lake 40 is sort of an iconic symbol of what has happened to many of Indigenous communities in Canada,” she said.

“It shows how Indigenous people were [made] invisible so that Winnipeg could have its water and it hasn’t started to be corrected until almost 100 years later.”

The federal government, along with the governments of Manitoba and Winnipeg, have committed to help fund the construction of a road linking Shoal Lake 40 to the Trans-Canada highway, connecting it to the rest of the country.

Thiessen also questioned the use of resources in spending $500 million on the Canada 150 celebrations.

“I don’t know why so much money has been spent on this birthday,” she said.
“It seems like half a billion dollars could have gone into much more important things than one big birthday bash with fireworks where people get drunk .”