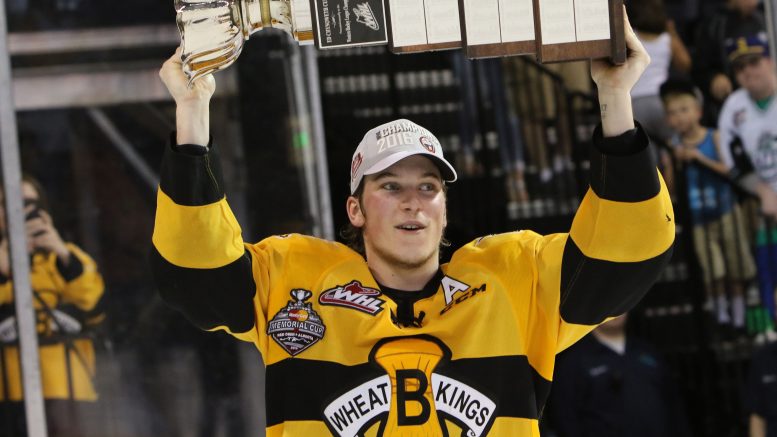 With the NHL entry draft, Las Vegas expansion draft, and a free agent frenzy, a number of players with ties to Manitoba saw their hockey futures shift substantially.

Brandon Wheat Kings centre and Winnipeg native Nolan Patrick was drafted at the number two spot by the Flyers, behind Nico Hischier who was taken by the New Jersey Devils at number one.

Patrick potentially slipped in the draft due to questions about his health. The centre missed considerable time this past season due to a sports hernia and leg injury.

Despite the injury trouble, the forward racked up 20 goals and 26 assists in 33 games for the Wheat Kings, following a stellar 2015-16 campaign where he netted 102 points in 72 games. Patrick will bring his competitiveness, work ethic, puck skills, exceptional two-way play, and great shot to the Flyers as early as next fall.

Calvin Pickard: Selected by the Vegas Golden Knights in the Expansion Draft

The Colorado Avalanche elected to expose Winnipeg born goaltender Pickard in the expansion draft. The Vegas Golden Knights wasted no time picking up the 25 year-old goalie, who is fresh off his second appearance wearing the red and white for team Canada at the 2017 World Championships.

Likely to play the backup role behind Marc-André Fleury for Vegas, Pickard has shown flashes of brilliance and will undoubtedly help the NHL’s newest team be competitive. If the “Flower” should suffer an injury, look for Pickard to grab the starter job and hold on.

Brendan Leipsic: Selected by the Vegas Golden Knights in the Expansion Draft

Potentially one of the best picks by Golden Knights general manager George McPhee in the expansion draft was Leipsic. The Toronto Maple Leafs lost a promising young talent to Vegas.

The Winnipeg native has posted 124 points – 45 goals and 79 assists – in 141 games with the American Hockey League’s Toronto Marlies over three seasons. Stuck behind a wealth of young talent, he was unable to crack the Leafs roster, except for a six-game stint in 2015-16 when he tallied three points.

The former Nashville Predators draft pick seems poised to finally get a full-time NHL roster spot, being a promising young talent for the fledgling Knights squad.

Cody Eakin: Selected  by the Vegas Golden Knights in the Expansion Draft

The third Winnipegger taken by Vegas in the expansion draft, Eakin spent the last five years of his career with the Dallas Stars. Over a 379 game NHL career, he has tallied 154 points – 65 goals and 89 assists.

Eakin will likely operate in the same capacity with Vegas, which boast the likes of William Karlsson, Erik Haula, Oscar Lindberg, the promising Tomas Nosek, and the aforementioned Leipsic at the centre position.

Patrick Sharp:  Signed with the Chicago Blackhawks on July 1

Following an underwhelming stint with the Dallas Stars, Sharp will make his return to the Chicago Blackhawks in the 2017-18 season. The Winnipeg-born winger recorded 28 goals and 45 assists with the Stars in two seasons hampered by injuries.

Sharp returns to a Blackhawks club that he won three Stanley Cups with. He will likely slot in behind Brandon Saad on the wing, also returning to Chicago, on the team’s second line with Artem Anisimov and Patrick Kane.

Ryan Reaves: Traded to the Pittsburgh Penguins during the NHL Entry Draft

Looking to add some grit to the Pittsburgh Penguins’ cup-winning roster, the team traded away their first-round draft pick to acquire this Manitoban tough guy.

Yet another Winnipegger, Reaves has spent his entire seven-year career with the St. Louis Blues. Through 419 career NHL games he’s racked up 695 penalty minutes, chipping in 27 goals and 24 assists along the way. Only time will tell how this deal works for Pittsburgh as they flirt with dynasty status, chasing a three-peat in the 2017-18 season.