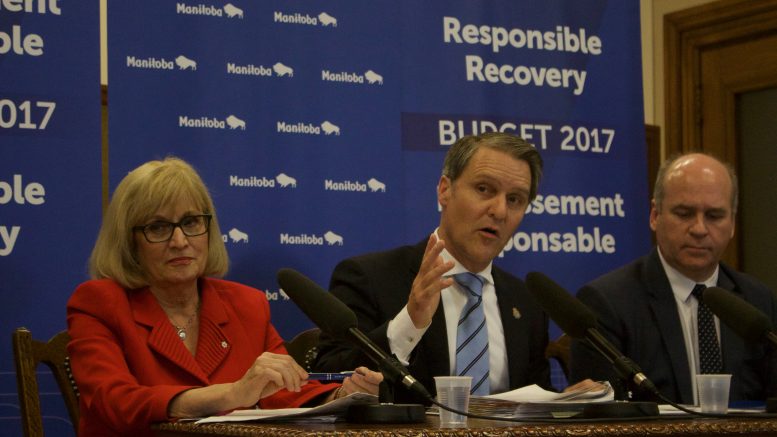 The provincial government will axe a program that provides tax rebates for Manitoba post-secondary graduates who stay in the province.

The tuition fee income tax rebate offered graduates an up to 60 per cent rebate on the total amount of tuition fees paid over their time at any post-secondary institution in the province, capped at $2,500 per year and $25,000 in total.

Manitobans were able claim the rebate over a period of six to 20 years after graduating.

The former NDP government introduced the tax measure in 2007.

In its 2017/18 budget, the provincial government also scrapped the tuition fee income tax rebate advance, which was introduced by the NDP in 2012 in order to provide tax relief for students while still in school.

In his budget speech Tuesday, minister of finance Cameron Friesen said the nixed rebates “did not meet their objective of encouraging students to come to, or remain in, Manitoba.”

“It did not serve the ends it was supposed to serve,” Friesen said at a press conference before his speech.

“There was no evidence that [the rebate] was working,” he said. “It was not something that was found to be a priority in the pre-budget consultations.”

“The tuition rebate program wasn’t working to keep students in Manitoba,” Pallister told reporters after the speech. “We can’t continue to support programs that have no demonstrable positive effects and there was no data or support for that program’s efficacy.”

“The thing we should be doing with those resources is lowering the barriers to entry in the first place.” As a transition measure, graduates will be able to claim their income tax rebate this year, but it will be capped at 10 per cent of tuition paid, or $500.

The rebate will be fully eliminated for the 2018 tax year.

The government estimates that by cutting the two rebates, they will save $52.9 million in the 2017/18 fiscal year.

The PCs also made good on an election promise from 2015 to increase the size of the Manitoba Scholarship and Bursary Initiative (MSBI) in Tuesday’s budget.

The MSBI was created in 1997 by the Filmon government and has provided a total of $89 million to post-secondary institutions since.

The initiative, which hands out millions in scholarships and bursaries every year, was previously backed by a one-to-one funding ratio between post-secondary institutions and the province. The province matched every dollar that institutions contributed to the $9 million initiative, investing $4.5 million per year.

Tuesday’s budget will increase the total size of the MSBI to just over $20 million, with a third of that – up to $6.75 million – coming from the province if post-secondary institutions manage to fundraise the remaining $13.5 million.

“No one voted to have tax hikes on recent graduates,” Kinew told reporters after the speeech. “This budget is going to make it more expensive to go to university and then to find a good job and stay in this province after you graduate.”

“Students wants to make their lives here. If we scare Manitoban students away after they graduate by raising taxes on them, that’s going to make it harder for us to grow our economy and fight the deficit.” “I don’t think it’s a sustainable way to fund our post-secondary system and create access for students,” Barkman said.

“This is trying to slay the deficit on the backs of students and that’s a real problem,” he told reporters. “Students are being really hit hard in this budget and the government has a lot of explaining to do.” In addition to the changes to MSBI, the provincial government will transform the $10.5 million Manitoba Bursary Program into grants that will be available to students earlier in their studies.

The budget also includes a $1.9 million bump from last year to the operating grants of post-secondary institutions in the province. The funding allocation represents a 0.27 per cent increase from 2016’s $680 million in funding, falling short of the province’s rate of inflation which averaged 1.3 per cent in 2016.

University of Manitoba president and vice chancellor Dr. David Barnard said the small increase in operating grants will not be enough to end the university’s current trend of budget cuts.

“No, there won’t be enough in the current year,” Barnard told reporters Tuesday. “So we’ll be faced with making some adjustments.”

“We’re aware of the need for responsible recovery.”

Correction: The article originally stated that the former NDP government introduced the tuition tax credit in 2009. In reality, the measure was introduced in 2007. The text has been edited to reflect this.

Needs of renters pushed aside during crisis

Peaceful protesters must be protected