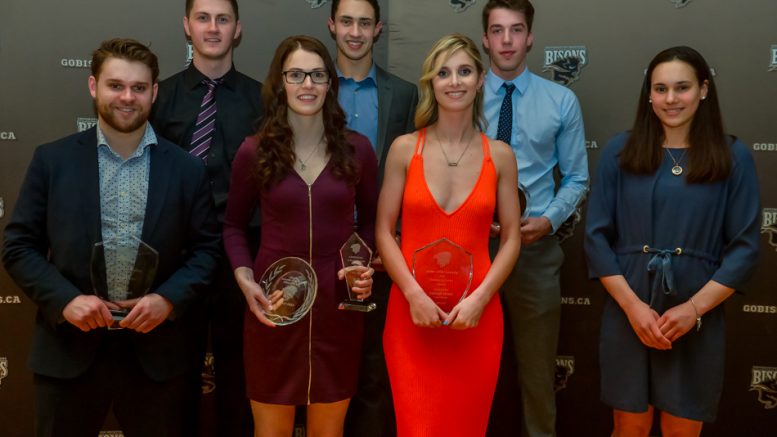 On April 1, athletes gathered for the annual awards banquet where standout players were recognized for their performance this year. Here are some of the major winners from the afternoon.

Bison Sports Athlete of the Year:

The third-year forward is just the fourth women’s hockey player to claim the annual award during its 54-year history, and was also the first Bison to be named the Canada West Women’s Hockey Outstanding Player of the Year. Keen had a stellar season where she put up a Canada West-best 34 points (nine goals, 25 assists), with her 25 assists leading all players within U Sports. Keen’s monster season also got her named to the 2016-17 Canada West First All-Star team as well as the 2016-17 U Sports women’s hockey First All-Canadian team.

In his fifth and final year as a Bison, Dear was a key piece of a team that finished the Canada West regular season schedule ranked as the number one team in the conference. Dear finished his final season with an impressive 3.96 kills per set, which was good enough for fourth best in Canada West, and led Manitoba with 309 kills throughout the season. He also finished fifth in conference hitting percentage at .308, and never missed a match for the herd. Dear was named to the 2016-17 U Sports men’s volleyball All-Canadian First Team and was named a 2016-17 Canada West men’s volleyball First Team All-Star. The veteran enjoyed a second place finish at the Canada West Final Four, and played his last set as a Bison at the 2017 volleyball nationals.

Bison Sports Rookie of the Year:

Wog made an immediate splash in her rookie year for Manitoba, and was recognized in conference meets as well as at U Sports meets. She was named Canada West rookie of the meet at the 2016-17 Canada West swimming championship, and was also named a conference First Team All-Star after recording three wins at the meet. Wog was also honoured as a 2016-17 U Sports First Team All-Canadian and stood on the podium four times at the 2017 U Sports swimming championships (one gold, one silver, and two bronze medals). Given her stellar first year, Wog is likely to be a force for the Bisons in the pool for many years to come.

Wagner was able to contribute to the veteran-filled Manitoba team instantly, and was named to the 2016-17 Canada West men’s basketball All-Rookie team. Wagner led the Bisons and ranked third in the conference in field goal percentage, with 56.8 throughout his rookie season. He was also at the 2016 FIBA Americas championships in Chile as well as competing with a veteran Bison team during the Canada West playoffs and the 2017 U Sports National championships in Halifax. Wagner will look to carry his success and experience into the 2017-18 campaign.

Bison Sports Coach of the Year:

This is the fourth time that Pischke was honoured with the Bison Sports Coach of the Year award for his stellar work with the men’s volleyball team. Pischke led the herd during a successful year that included being ranked number one in the nation, winning silver at the Canada West final four at home, and competing at the U Sports nationals. Pischke also reached an individual milestone this season and won his 1,300th match on Jan. 14. He has the most wins by a coach in U Sports history. The men’s volleyball team will be losing many veteran players this upcoming season, but if anybody is able to lead a young team to success, it’s Pischke.