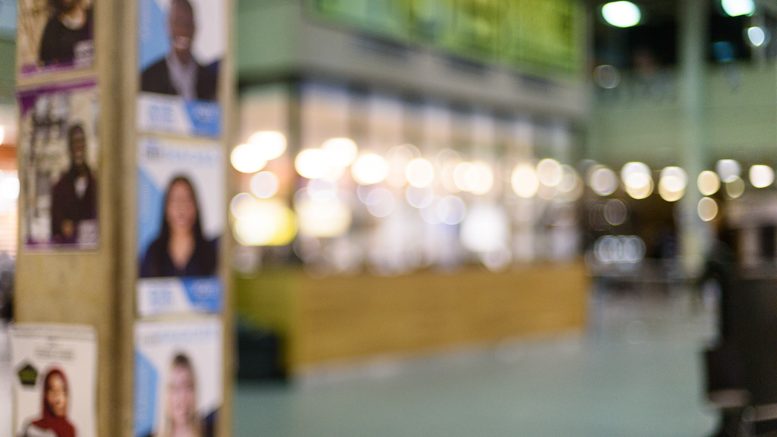 Only two slates contested the executive positions, fewer than last year when three full slates, one partial slate, and an independent presidential candidate faced off.

In sharp contrast to the UMSU electoral returns, the 2017 UWSA general elections, which closed March 8, had a voter turnout of only 13.8 per cent – a turnout that was still higher than other recent UWSA elections. The 2017 UWSA elections, a contest of two full slates, one partial slate, and an independent, ended with a little above 1,100 ballots cast.

“First of all, it is easier to vote because of the online voting,” he said.

“From my office, we had Snapchat filters, Facebook ads, Instagram ads, we had the UMSU social media posting stuff, we had UM Learn and D2L posting and notifications [a] couple of weeks before the elections and also on voting days.”

Catanese said there is no established link between the number of candidates competing for executive positions and voter turnout, saying that participation varies and is dependent on several factors.

“I don’t think there is a direct correlation, but there are some years when we will have either unopposed candidates or candidates where people just kind of know who is already going to win,” he said.

“Maybe there is one big name and the other people are just doing it for fun, those years we definitely see lower turnout. We have had years when even like four to five per cent of people voted because they don’t care.”

“I think having the candidates not on the [University Centre] floor on voting days forces the candidates to be on social media and I think that was helpful for voter turnout,” he said.

UWSA chief elections commissioner Hollie Swart said her team employed an array of promotions, coupled with outreach and increased polling station accessibility, to stimulate voter participation both on campus and through social media.

“We spoke to several students each week about the election, [explained] how they can be nominated for positions on the board, how they can vote, and just generally made them aware of the UWSA and the election,” she said.

“We also did loads of promo throughout campus, on CKUW 95.9 FM, in the Uniter, and on social media in the weeks leading up to and during the election.”

She said she is optimistic that following suit with online polling could increase turnout moving forward.

“Online voting is definitely something to be considered for future elections at the university,” she said.

“It certainly seems more efficient and readily available to anyone at the university, and has potential to increase voter turnout in future elections,” she said.

The 2017 UMGSA general elections completed this week with 17 candidates, including two full slates and three independent candidates, vying for the association’s executive spots. Results were not available by press time.

Despite turning to online balloting in 2011, the UMGSA has experienced low voter turnout the last few years after experiencing an initial boost.

The association does not allow candidates to make use of social media platforms for campaigning.

According to chief returning officer Md Momin Al Aziz, the UMGSA election policy has left the candidates with no choice than to make use of “archaic methods.”

“UMGSA still follows some of the archaic methods of campaigning… according to its election policy. These candidates reached out to most of the research labs which are spread throughout the Fort Garry, Bannatyne and St. Boniface campus,” he said.

“I think such endeavor will at least make sure that this year we might have more participation than [the] last few years, where usually the voting participation is only five to ten per cent of the total population.”