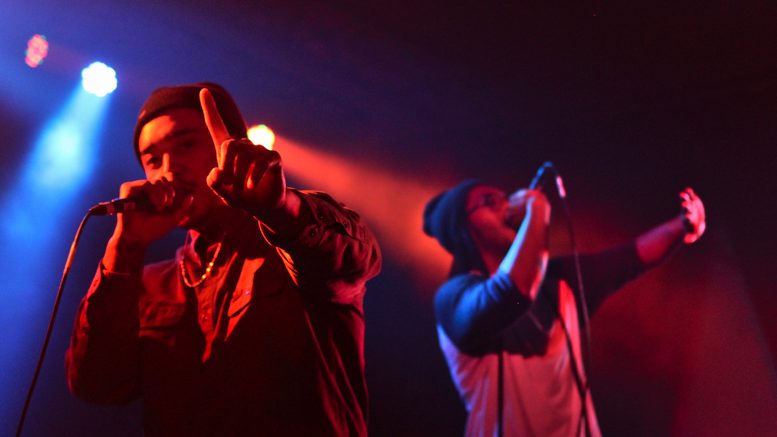 3Peat is a local hip-hop trio comprised of members WATG Steve, Dill the Giant, and E.GG. The troupe delivers hard-hitting lyrics to solid backbeats that have their audiences hooked on the first song.

Though the group only released their EP in September 2016, the Winnipeg music scene has already picked up on the music that they’ve been producing since 2015, playing big local events such as Spaceland, Big Fun Festival, and various hip-hop centric events around the city. The group has also been picked up for a show at Canadian Music Week 2017 in Toronto.

According to Steve, Winnipeg’s hip-hop scene is on the rise for the first time in a long while.

“In my opinion, the scene is actually healthier than it has been in a long time. Although we’ve always had a budding creative and music scene, it’s always seemed like it lacked a community aspect, but recently it seems like those barriers are being broken down, and you’re seeing a lot of local artists creating together, sharing bills, and just pushing each other to go further.”

“There are not enough of us. We gotta get everybody doing their thing out here and supporting one another,” added Dill.

Each member of the group brings something different to the table, but one thing that’s evident by 3Peat’s performance is that they work together like a well-oiled machine.

“We like to refer to ourselves as a triangle offence of various styles,” said Steve.

“Everyone is very different when it comes to rhyme style, content, and overall taste, but there’s something special that happens when we get together, and the pieces just fit together like a puzzle. Kinda like Voltron, if you will.”

The process of writing a song for 3Peat is an organic process that includes the musical and lyrical work of all members.

“With us, the songs practically create themselves. Someone will make the beat, whether it be myself, Dill, or E.GG, and before we know it, we’re coming up with concepts, writing the verses, and recording,” Steve explained.

“Sometimes that happens all in the same night, sometimes over an extended period of time. We like to keep things as self-sufficient and organic as possible.”

3Peat’s inspiration ranges from local artists to classic “golden era” hip-hop, focusing on genuine and honest artists, and standing by the mantra that “real recognizes real.”

Non-musical inspirations for 3Peat range from members’ day jobs as a barber and a social worker in a group home to traveling, culture, and family.

Steve said his parents have been extremely supportive of his art, and he draws inspiration from the lessons they’ve provided: to work hard and stay positive.

Dill’s inspiration comes from skateboarding as he believes it is “the purest form of pushing yourself forward, literally.”

E.GG says that his inspiration comes from traveling.

“That, along with just living day by day, and the interactions with any and everybody. Who knows who you’ll meet along the way that might change or influence your life, right?”

3Peat is especially grateful and inspired by the reception they have had in Winnipeg so far.

“Winnipeg, first and foremost, I want to say respect for the unconditional love and support,” said E.GG on the group’s reception in the city up to this point.