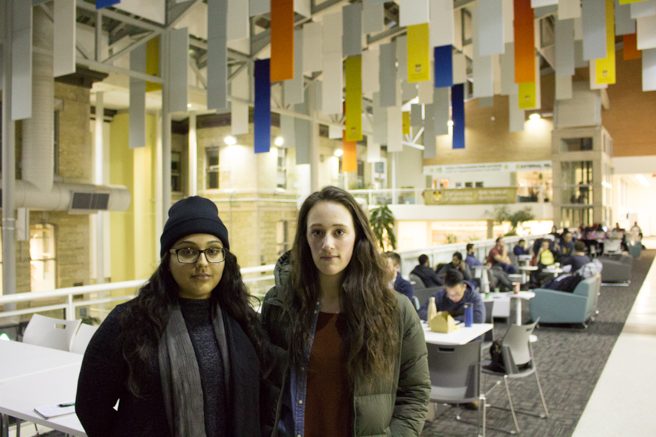 University of Manitoba Students’ Union (UMSU) executives are not satisfied with the Canadian Federation of Students’ (CFS) response to the local’s demands for an apology regarding treatment of UMSU executives at the CFS national general meeting in November.

In a two-page letter sent on Jan. 17, national CFS executives and the chairperson of CFS-Manitoba responded to allegations that they did not adequately address harassment of UMSU delegates during the closing plenary of the general meeting.

The letter states that CFS officials made it clear to delegates at the meeting that there were anti-harassment officers available throughout the weekend and that when the meeting became “contentious” during closing plenary, CFS staff members suggested UMSU delegates speak with one of the officers.

“Despite several approaches from both CFS staff and the officer, UMSU delegates did not avail themselves of this support, nor file a complaint with the anti-harassment officers,” the letter reads.

No apology for any alleged harassment was included in the response.

The response comes just over a month after UMSU council passed an emergency motion at its Dec. 8 meeting instructing the union’s executives to write a letter to CFS national executives demanding they apologize to UMSU delegates at the meeting, UMSU council, and University of Manitoba international students. The emergency motion also instructed UMSU executives to halt all attempts of reconciliation with the federation after years of tension.

UMSU vice-president advocacy Dara Hallock said that she was disappointed when she read CFS’ response and that it only serves to hurt an already-strained relationship between the two organizations.

“I was upset. I was kind of stunned,” Hallock said. “We want an apology for how we were being treated. The organization itself has it outlined in their governing documents that it needs to be a safe and inclusive space.”

“There was incorrect information included in their letter,” she said. “Saying that no one accessed the anti-harassment officers provided to them prior to the last day and that no one had made a formal complaint because there were actually two made before the final meeting.”

“I was stunned that they wouldn’t even grant us an apology.”

“In every way that was possible, we did our very best to support and promote well-being for not only [UMSU] but also across the board,” Arte told the Manitoban. “[The demand] is a bit confusing because I do know that there was support offered to delegates at various points during the meeting.”

“Our position is that we provided the support that we could at that time and in fact on multiple occasions while the incident had occurred and afterwards,” she said. “I think that our position is really clear in that respect.”

Nagra doesn’t buy Arte’s claim that CFS did everything it could to make UMSU delegates feel comfortable.

“The tone of the debate was very turbulent and it did not have to be that way, but the tone at the beginning was set when a delegate incorrectly used a point of order to attempt to call myself and Dara out as board of governors reps for UMSU,” Nagra said.

Arte also disagreed with that point, explaining that at no time did the executives let delegates harass others during the meeting.

“I would disagree that the process was done out of order or anything like that,” Arte said. “That’s not at all what had happened. I think the person was very much in order and our meeting was conducted in a way that was very fair to all interventions.”

The letter from CFS executives also addressed the motion UMSU introduced at the general meeting calling for the federation to advocate for international student fee increases to be locked at the same percentage as domestic students. The response reiterated that the International Students Constituency unanimously opposed the motion because they viewed it as a weakening of the federation’s current policy opposing any form of tuition increases.

The official response from CFS also included a rebuff to UMSU’s claim in their Dec. 16 letter that the repayment of three years worth of unpaid fees to the federation earlier this year was an act of reconciliation.

“Member local student associations have a contractual obligation to remit membership fees to the federation,” the letter read. “The remittance of three years’ worth of outstanding membership fees by UMSU should not be viewed as a reconciliatory measure but rather the belated fulfillment of a legal requirement.”

Hallock took offense to that segment of the response, claiming that CFS was discrediting months of attempts to re-establish good will between the organizations.

“They’ve delegitimized every single step we’ve tried to take moving forward with them,” she said. “We don’t even know where to go now. We’ve tried every step.”

The response was not discussed at UMSU council’s regularly scheduled meeting on Jan. 19, save for a few words from Hallock signaling a willingness to continue working with CFS-MB, as the provincial branch of the federation had little to do with UMSU’s treatment at the general meeting in Ottawa.