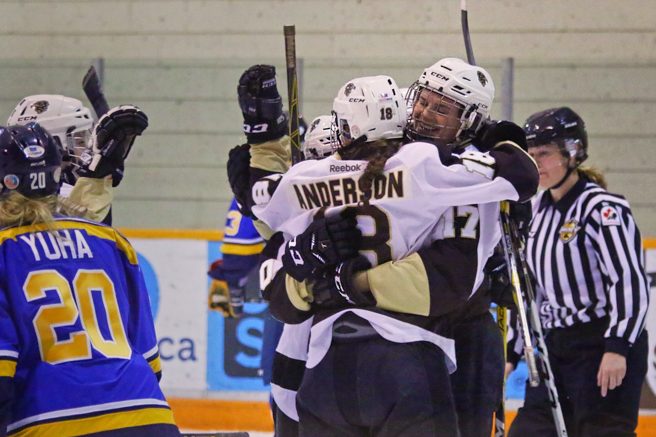 This weekend, the sixth-ranked University of Manitoba women’s hockey team continued their home stand with a two-game series against the lowly Lethbridge Pronghorns. The Bisons won 5-1 on Friday night, then blanked the Pronghorns on Saturday 5-0.

After the weekend series, the Bisons sit third in the Canada West with a 12-5-3-2 record, one point back of the second-place Alberta Golden Bears.

Following a split last weekend with the UBC Thunderbirds, the Bisons stayed at home for a Friday night tilt against the University of Lethbridge Pronghorns. Manitoba scored early and often, earning an easy 5-1 win.

The Bisons were back to early season form – getting pucks deep, crashing the net, and getting traffic in front of Pronghorns starter Alicia Anderson. Lethbridge got some pressure in the Manitoba end late in the frame, but it was the home team that opened the scoring thanks to Alexandra Anderson.

Anderson got the play going, sending a pass to Erica Rieder in the corner and cutting towards the net. Rieder moved the puck in front, where it bounced off the stick of Sheridan Oswald and into open ice just beyond the crease. Anderson pounced on the loose puck, sliding it past Anderson of the Pronghorns to make it 1-0 Bisons.

The opening moments of the second period saw Lethbridge tie things at one. Tricia Van Vaerenbergh picked up the puck in the defensive end and turned on the jets. She motored through the neutral zone and entered the Bisons’ zone, ripping a shot top corner on Rachel Dyck.

Oswald got the Bisons back ahead a few minutes later off a pretty play. Karissa Kirkup had the puck in the Lethbridge zone and put a pass through the legs of a Pronghorns defender. Oswald caught the pass and buried a shot five-hole on Anderson to make it 2-1.

Oswald got her second of the game 10 minutes later, extending the lead to two. The Bisons’ lead pushed to three off the stick of Venla Hovi on a power play. A rebound from a Lauryn Keen shot fell in front of the crease where Hovi snagged it. She circled the Pronghorns crease, causing Anderson to dive and put the shot top shelf on the yawning cage for a 4-1 Bisons lead.

Anderson picked up her second of the game on the power play, and the Bisons cruised to a 5-1 win over the Pronghorns.

“Teams know that if they’re going to be undisciplined against us in any given game they could end up paying for it,” Bisons head coach Jon Rempel said of his team’s power play which went 2 for 4. “That’s a sort of feather in our cap.”

A day after drumming the Pronghorns 5-1, the herd were up and ready to try for a season series sweep against Lethbridge. Manitoba’s top scorers were in peak form as the Bisons cruised to a 5-0 win.

The first period was a hard-fought and physical affair, as both teams got chances. However, both goaltenders stood tall. The line of Hovi, Keen, and Alanna Sharman caused plenty of trouble, but couldn’t beat Lethbridge goalie Anderson.

Their hard work paid off in the second, Keen got the puck and brought the play into the Pronghorns zone. She cut diagonally in front of Hovi at the right faceoff dot, dropping a pass to her linemate. Hovi had a clear lane to the net, rifling a shot over Anderson’s shoulder for a 1-0 Bisons lead.

The lead was extended to two a few minutes later thanks to Oswald. She pounced on a loose puck, banging home her sixth of the year to make it 2-0.

Hovi scored again with help from Keen to make it 3-0 Manitoba by the end of the second. The Hovi-Keen-Sharman line kept rolling in the third. Just 37 seconds in, Sharman finished off a pretty passing play to put the Bisons up 4-0. Rieder added another power play marker and Amanda Schubert picked up the shutout in a 5-0 win.

Hovi, Keen, and Sharman combined for eight points in the win, catapulting Keen back into the Canada West scoring lead with 23 points.

“They have chemistry on and off the ice and you can clearly see that,” Rempel said of his top line after the game, calling it unselfish hockey.

The Bisons head back out on the road to meet the University of Calgary Dinos on Jan. 27-28.

Tea Party for one