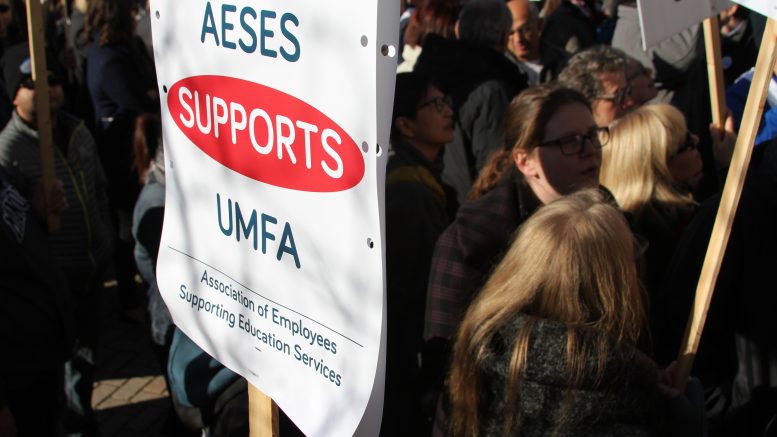 The Association of Employees Supporting Education Services (AESES) – which represents numerous levels of U of M support staff – is affiliating with a larger, national labour union.

After 43 years acting as an independent organization, AESES announced in December its board of representatives approved an affiliation with the Confederation of Canadian Unions (CCU).

AESES president Laurie Morris said the union joined ranks with CCU in order to stay politically vibrant and relevant in the face of growing issues impeding the progress of unions, both locally and internationally.

“Throughout the years, we have remained independent and also unaffiliated. We stayed focused on our mission of serving our members,” she said.

“For some time, however, we have felt the need to become more politically active and cognizant of the issues facing the unions locally, nationally, and even internationally.”

AESES represents about 2,500 full- and part-time employees working in various departments on campus, including clerical and administrative, technical, and security services, among others. The union reached a new collective bargaining agreement with the University of Manitoba in February 2016 after 10 months of negotiation.

In August 2016, some members of AESES were victims of budget cuts and departmental restructuring within University of Manitoba libraries. The restructuring led to the loss of nearly 40 positions.

The CCU claims it is Canada’s largest federation of independent labour unions with six affiliates – including AESES – representing more than 16,000 members.

Morris said affiliating with the CCU is a step in the right direction to avail AESES with the resources for a larger fight while also maintaining the high standards of the union.

“Unions are under attack,” she said. “By affiliating with the CCU, we hope to become part of a larger fight to maintain everything that unions have fought long and hard for.”

Morris noted AESES previously considered affiliating with other labour unions and organizations but never took the step to strike an agreement.

She said CCU first approached AESES in early 2016 for a possible affiliation.

AESES representatives took their time researching and meeting with CCU affiliates before agreeing to the conditions of the affiliation proposal.

Morris said recent comments from Manitoba premier Brian Pallister concerning public sector unions – including a promise within the November throne speech that would prevent the government from agreeing to any increases it cannot pay for without deficit spending – gave AESES almost no other option than to take advantage of the CCU affiliation.

“We strongly feel that this is the right time to make this commitment given the Pallister government’s plans regarding wage freezes for public sector jobs and other attacks on unions, such as the passing of Bill 7,” she said.

Bill 7 amended the Labour Relations Amendments Act and made a secret ballot mandatory before a union can be certified as the bargaining agent for a group of employees. The bill was criticized by provincial labour union leaders for being an attack on workers’ rights.

In his first state of the province address in December, Pallister further alienated public sector unions by stating there are too many bargaining units within Manitoba healthcare and suggesting that number should come down.

Morris said she is hopeful the CCU affiliation will bring additional supports to AESES while allowing the association to give a boost to other member organizations.

“We hope that our affiliation with the CCU will aid us in tackling issues facing our members locally and provincially while we strive to lend our support to others in need.”

More students getting involved with party politics on campus