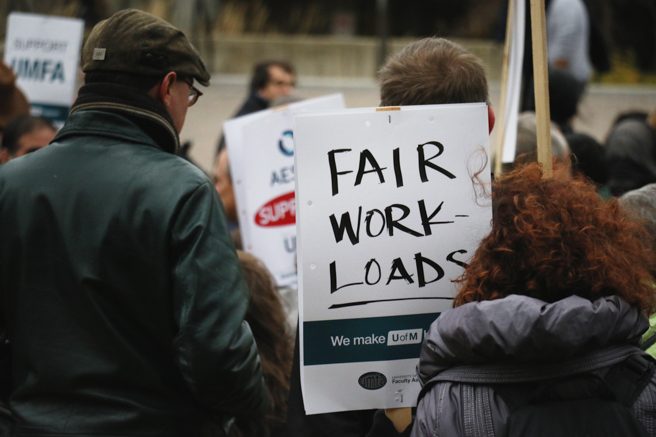 The University of Manitoba Students’ Union (UMSU) affirmed support for striking U of M faculty’s educational and workplace demands at its regular meeting Thursday.

The University of Manitoba Faculty Association (UMFA) has been on strike since Nov. 1, cancelling hundreds of classes and leaving the fall term in limbo. Negotiations between the university and UMFA have been ongoing since May.

The two sides have been in discussions with a provincially-appointed conciliator since Nov. 2.
Thursday’s meeting was the first time council met since the strike began.

The emergency motion, introduced by UMSU president Tanjit Nagra, was originally aimed to pressure both sides of the negotiating table to come to an agreement as soon as possible.

However, after a lengthy debate and question-and-answer session with UMFA president Mark Hudson and U of M vice-president external John Kearsey, Arts Student Body Council representative Niall Harney introduced an amendment affirming that UMSU council side with faculty in relation to its demands surrounding workload protections, job security, childcare, and salary.

The motion passed 18 votes to 10 in a secret ballot, with three abstentions.

The motion also compels Nagra to draft a letter on behalf of council addressed to Hudson and U of M president David Barnard outlining council’s support for UMFA. UMSU will also organize a day of action for students to join UMFA pickets by Nov. 18.

Following the meeting, Nagra said she hopes the motion will hasten a resolution.

“I’m hoping that our stance works alongside the current discussions and we’re able to pressure the negotiations to go quicker,” she said.

“Let’s hope that a fair deal is reached sooner and people can get back to their classes.”

Nagra said UMSU’s support for faculty draws from a survey the students’ union circulated to students through an e-newsletter last week.

Twelve per cent of those surveyed checked off “whatever ends the strike.”

“We did our best to inform students, to get their opinions,” Nagra said. “The survey we sent out was obviously a small sample but I think it was a fair sample size of the student body.”

UMSU’s position comes the same day the U of M senate approved a package of potential changes to the academic schedule to manage the fallout from the strike, which is set to enter its third week Monday.

Under the worst-case scenario imagined, which would see classes resume the week of Nov. 29-Dec. 5, the fall term would on Jan. 20 with an exam period from Jan. 21-28.

The winter term would begin Jan. 30 and run until April 28. The winter exam period would run from April 29 to May 6.