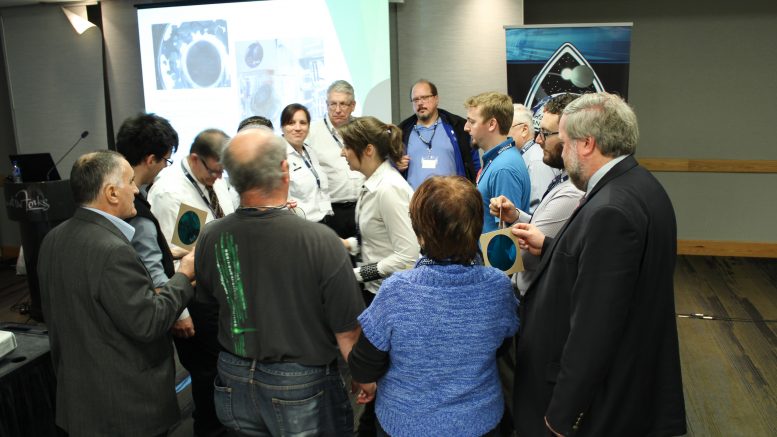 For one weekend, Canada’s space industry came together in Winnipeg.

The non-profit two-day event in Winnipeg welcomed over 80 delegates from across Canada, the U.S., and further abroad to the Inn at the Forks. The delegates included students, academics, educators, industry experts, military representatives, and general space enthusiasts. The conference theme, “The Centre of It All,” was chosen to highlight Winnipeg as not only the geographical centre of Canada, but also a central area for research on space activity.

One of the Canadian Space Society’s main goals as an organization is to use outreach and education keep Canadians informed on the progress of space development. As a precursor to the conference, the CSS partnered with the Manitoba Museum to host a series of public events on Nov. 12 and 13, along with several workshops during the actual Canadian Space Summit.

The CSS has made a particular attempt to reach out to the public through art, and regularly includes gallery exhibits or artistic workshops in its repertoire of activities. During the weekend events, a series of workshops were held which included beginner and intermediate rocket construction, and a solar system workshop for kids which uses the Manitoban grade six teaching curriculum to get children to imagine, and then paint, what they believe a solar system looks like.

Throughout the weekend, the Manitoba Museum also provided special programming at the planetarium and in the Touch the Universe science gallery. Present in the science gallery’s fun zone was a replica of the Sputnik satellite, the first satellite launched into orbit in 1957 by the former USSR.

On Sunday, a tour of the Magellan Aerospace facilities was also held. Magellan Aerospace is currently working on completing and testing its RADARSAT constellation mission buses, and as of last year completed the construction of its advanced satellite integration facility in a partnership with the University of Manitoba.

The public event day activities were brought to a close Sunday evening with a showing of Mars One, which made its debut during the 2015 Winnipeg Fringe Festival. The quirky, one-person show uses lighting and props to tell a story of a person invited to live on Mars. Integrated into the show are a series of interview recordings of local Winnipeggers reacting to the controversial Mars One initiative.

After the public event days, the Canadian Space Summit also offered several tours and workshops. Day one of the Summit invited participating delegates to the Canadian Museum for Human Rights for dinner and a tour of the museum.

During day two of the Canadian Space Summit, the “Getting Space into the Classroom” workshop was held with educators from K-12, university, and outreach representation. The discussion focused on educational and outreach initiatives that benefit Canadians.

A “Space Leaders Roundtable” was also held with several representatives from non-profit organizations, non-governmental organizations, universities, and industry representatives. The discussion – lead by Kate Howells, global community outreach manager from the Planetary Society – focused on how to coordinate an effort to communicate clear objectives for the Canadian government to take the direction of the Canadian space industry.

Manitoba Aerospace also held its young professionals luncheon where participants were given presentations by Tom Tessier, president of Solara Remote Data Delivery Inc., Khaled Shariff, CEO of Project Whitecard, and Steven Freeland, professor of international law at the University of Western Sydney. There were a multitude of topics discussed, including VR technology’s impact on the local and global industry, and the legal challenges of commercial space initiatives.

John Spray, director of the Planetary and Space Science Centre at the University of New Brunswick, gave a keynote presentation on the science being conducted on Mars by the Curiosity Mars rover.

The presentations were a large draw at the Summit, as many visitors had a science background or were pursuing aerospace as a possible career.

“Some of the sessions that I enjoyed the most were definitely ones in space applications,” said André Marchildon, a mechanical engineering student from the University of Manitoba faculty of engineering. “I’m a final year mechanical [engineering student] with a focus in aerospace, so hearing what’s happening right now in the aerospace industry is very interesting.”

Along with the workshops, speakers, and technical sessions, the Canadian Satellite Design Challenge (CSDC) held its systems requirement review for the upcoming competition, which will span from 2016 to 2018.

The CSDC challenges post-secondary students from across Canada to build and compete with nanosatellites. These satellites, which are roughly the size of a two-litre milk carton, must be designed and built by the student teams, and must have a scientific payload that can collect data for at least a year. At the end of the two-year competition cycle, the teams then proceed through satellite testing before being judged by industry experts. 12 of the 14 participating teams were present for the review lead by CSDC manager, Larry Reeves.

While the delegation to the Canadian Space Summit conference was relatively small, the diversity in experience, disciplines, and interests facilitated plenty of productive discussion among participants.

Sophie Orr, a graduate student in space studies at the University of North Dakota, traveled to Winnipeg to attend the conference.

“The wide variety of talks gave us the opportunity to meet experts from fields that we don’t normally interact with,” said Orr.

“This played into the idea of space as an interdisciplinary field, where it is important to know about all aspects of it in order to make informed decisions.”

The next Canadian Space Summit conference will be hosted in Ottawa on Nov. 21 and 22, 2017, with the theme “Canada’s Next Space Generation.”

A future without aging complications or disease