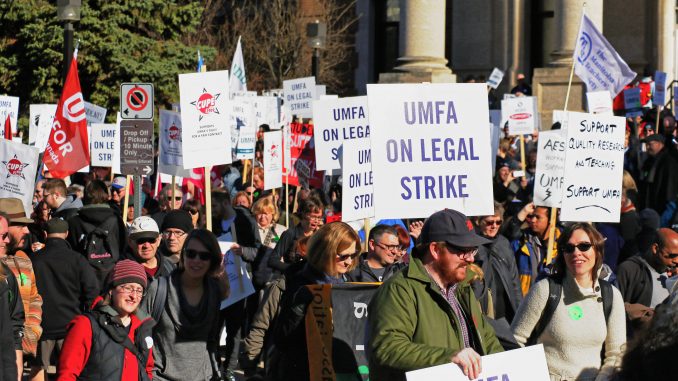 Today, U of M graduate students announced tentative support to faculty in their ongoing strike with administration.

The University of Manitoba Graduate Students’ Association (UMGSA) council conducted an online vote on a motion on Nov. 15 to “declare its support for UMFA’s stance on workload protection, performance metrics, and job security for librarians and instructors.”

The motion – which says the issues faced by UMFA members have an impact on graduate student education – was sent to council after it was approved at an emergency executive council meeting on Nov. 14.

Although the UMGSA executive announced they’ve reached out to UMFA based on the vote results, the motion still requires ratification on Nov. 23 at the UMGSA’s next council meeting.

UMFA president Mark Hudson said faculty was really pleased with the UMGSA’s support and extended their thanks. He added that he had already seen individual graduate students joining the picket lines.

“They’re in kind of a unique position,” Hudson said. “Like other students, I think they understand that our strike issues are tied to the quality of education at the U of M.”

“But many of them are also positioning themselves as future academics, and so I think that in looking at the kind of issues that we’re striking on, I see that these aren’t issues important to them just as students, but also issues about their future working conditions, the kind at the universities that they’ll be looking for positions in.”

UMFA began picketing Nov. 1 after negotiations with university administration – which had been ongoing since May – failed to produce an agreeable contract. UMFA’s previous three-year contract expired March 31.

Following up on free-choice learning

U of M considers enrolment goals