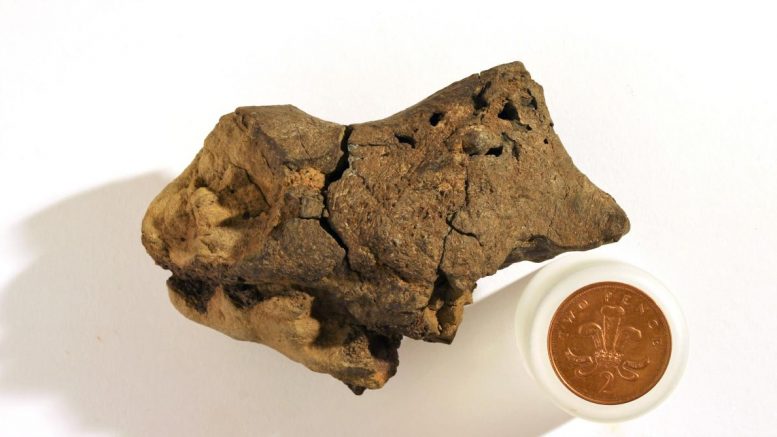 Scientists have discovered what they claim to be the very first instance of a dinosaur brain fossil.

The study, published in a Special Publication of the Geological Society of London, stated that through a chain of coincidences, a “remarkable preservation” of dinosaur brain tissue has been found.

The fossil, which is about the size of an orange, was first found in 2004 by fossil hunter Jamie Hiscocks in Sussex, England. After he brought it to Martin Brasier, a University of Oxford paleobiologist, they confirmed it to be an endocast – a fossil that is formed when a cavity in a dinosaur’s skull is filled with rock, thus creating a mold of the brain cavity.

They also believed the fossil to be from the skull of an iguanodon, a herbivorous dinosaur that roamed the earth 133 million years ago.

While finding an endocast in itself is very rare, what jumped out to Brasier after further inspection was rarer still. The fossil also had irregular grooves and indents along its surface. With the help of a scanning electron microscope (SEM), those grooves and indents began to look surprisingly similar to the fibrous bundles that occur in the brains of present-day reptiles and birds.

While Brasier passed away in 2014 – the study was published in tribute to him – the fossil continued to intrigue scientists. David Norman, an iguanodon expert whom Brasier collaborated with prior to his death, confirmed that the fossil fit perfectly into a mold of an iguanodon skull.

Norman, along with a team of researchers, used SEM and computed tomography (CT) scans and found instances of what were once blood vessels, capillaries, and meninges – the membranes that cover the brain. While the scans definitely showed brain tissue, they also showed that the inside of the fossil was filled with rocks, sticks, and charcoal. The new question became that of coincidence. What steps of misfortune had to befall this iguanodon for some of its quickest-decaying tissue to somehow fossilize?

Paleontologists believe that the brain tissue was able to fossilize despite its quick rate of decay due to the brain being “pickled” in a high-acidity swamp immediately after the dinosaur’s death.

“What we think happened is that this particular dinosaur died in or near a body of water, and its head ended up partially buried in the sediment at the bottom,” said Norman, in a press release by the University of Cambridge.

“Since the water had little oxygen and was very acidic, the soft tissues of the brain were likely preserved and cast before the rest of its body was buried in the sediment.”

These results do not come without naysayers. Mary Schweitzer, an evolutionary biologist and expert on dinosaur soft tissue preservation, brought up the confusing nature of the tissue’s fossilization, and the fact that the brain tissue was preserved while the skull was not, at the presentation of the fossil on Oct. 27.

The study’s co-authors agree that more research on the fossil is needed, and Hiscocks and Norman hope to get the fossil to a public museum collection for further examination.

‘Science and the Climate’