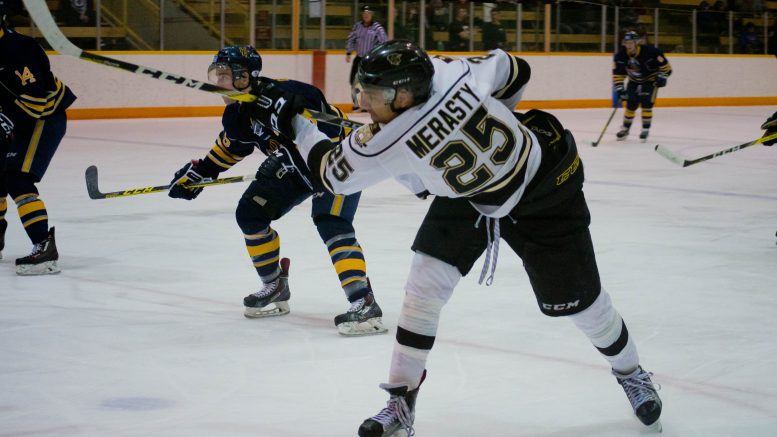 On Friday, the Bison men’s hockey team opened up the first of a two-game series at home to the Lethbridge Pronghorns. The injury-plagued Bisons lost 4-2 in a game they thought they should have won.

“If you look at the stats we outshot them, we out chanced them, we just didn’t score,” head coach Mike Sirant said post-game. “Give credit to their goalie, and [the Pronghorns] they played well in front of him.”

The Bisons were dominated in the early going after a tipped shot went over Justin Paulic’s shoulder to put the Pronghorns up 1-0. Jordan DePape tied the game for the herd on the power play, and ripped a wrist shot high-glove side over Hughson.

In the second, the Pronghorns showed a lot of life and grabbed another goal early on. The Bisons had plenty of chances to tie the game up, but Hughson was stellar for Lethbridge.

The ‘Horns added to their lead late in the second after Brandon Clowes barreled in on the rush and fired a low, hard shot under the blocker of Paulic. He had allowed three goals on 12 shots.

Dasan Sydora manned the pipes for the Bisons in the third period, and he was tested early on. Justin Valentino had a marvelous chance on a breakaway early in the third stanza, but couldn’t find the handle to slide the puck past Sydora.

The Pronghorns made it 4-1 after Clint Filbrandt jumped in on the rush and slid the puck five-hole off a nice feed from Artsiom Kalashnikov. Shaq Merasty cut Lethbridge’s lead to two after he one-timed his third of the year on the man advantage. It was too little, too late for the home side, as they dropped this decision 4-2.

The Bisons and the Pronghorns do battle again on Saturday at 1 p.m. at the Wayne Fleming arena. Games can be streamed live on UMFM.com

Heartbreak for the herd