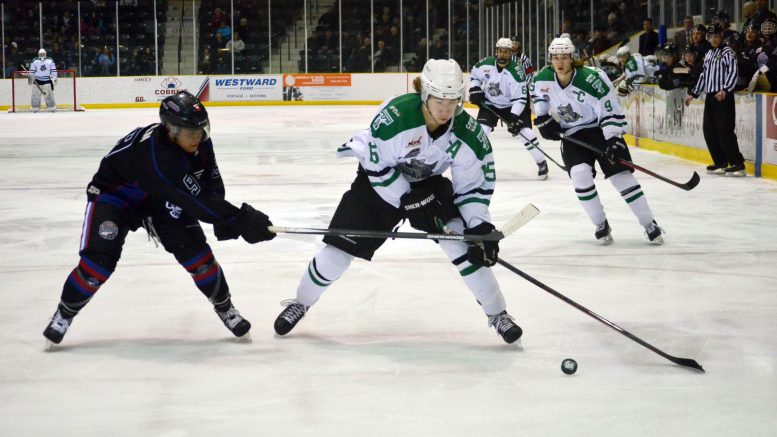 The University of Manitoba men’s hockey team is gearing up for another tough season. Although the majority of the team that finished last season in fourth place in the Canada West is staying with them, they have done their fair share of recruiting.

Bisons head coach Mike Sirant was quick to point out that although they have gotten better, so has the rest of the conference.

“As much as we have improved, there also other teams in our conference that have improved,” he said. “It has been a real arms race. We know it’ll be a tough conference with a lot of parity.”

Two key moves by the Bisons have been the recruiting of brothers Shawn and Brad Bowles. The twins from Elkhorn, MB are looking to make an impact this season.

“We haven’t prepared too differently from years past,” Brad said. “We’re trying to get used to it right now, keeping on the ice and getting in shape.”

The Bowles brothers have spent the last four seasons with the Portage Terriers of the Manitoba Junior Hockey League (MJHL). Both have won the MJHL championship twice, and collected the RBC Cup in 2015, the most prized trophy for Junior A hockey teams in Canada.

Last season, Brad won the MJHL scoring title with 102 points (45 goals, 57 assists) en route to a championship. Shawn is no slouch offensively, as he racked up 19 goals and 46 assists for 65 points.

The Bisons were desperate for offense last season, as there was a steep drop off after the top line. Sirant commented on the depth of this year’s additions to the Bisons.

“This has been an extremely competitive training camp,” he said. “We have a lot more depth, especially at the forward position, so we as a coaching staff are going to have to make some tough decisions.”

The Bowles enter a squad with a mix of young guys and veterans, many of whom have been leaders on their teams prior to coming to Manitoba. Shawn said that the transition to this team has been smooth.

“We’re just keeping the same things as we have done in Portage,” he said. “Our whole team has been so welcoming this year – we’ve got a few older guys guiding the younger guys, which is good.”

The twins decided to come home and play for the Bisons and are excited to get started at the CIS level.

“The calibre of hockey is so fast and it’s recognized,” Brad said. “There are lot of good players in this league coming from the WHL and other Junior A leagues.”

They are also ready to take on the challenges of balancing school and hockey, a topic that is prevalent with all student athletes.

“We’re just trying to get into a routine with school and hockey at the same time, shouldn’t be too hard,” Shawn said. “We’ve done it in high school, playing midget and traveling an hour for practices.”

The Bison men’s hockey team will be an exciting one to watch this season. A team largely made up of rookies last year will now be one year more experienced.

“Our team evolved to become a puck possession team last year. We try to combine speed and skill and play an up tempo game,” Sirant said. “We will stick with playing that style this season. With the many players we retained it will be easy to do.”

The Bisons open up the 2016-17 regular season on the weekend of Oct. 14-15 against the Mount Royal Cougars.

Two points none the richer