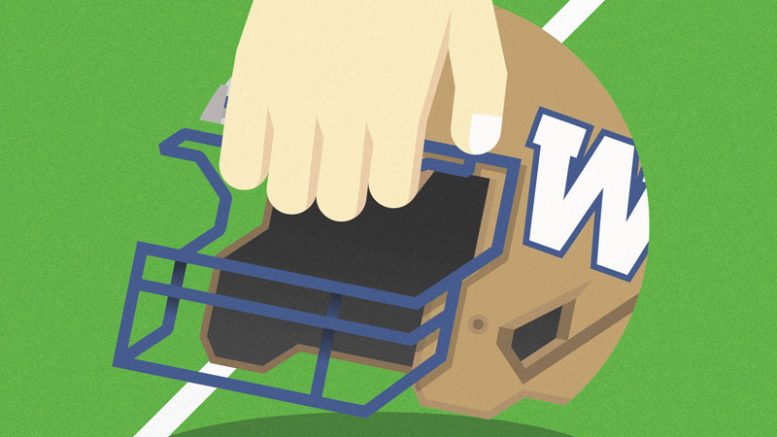 Two weeks ago, the tone for the Winnipeg Blue Bombers was bleak and gloomy, as it looked like they were trundling towards yet another miserable 5-13 season. But in the highly volatile Canadian Football League (CFL) things can change in a week, and did things ever change for the Bombers.

The turnaround in the team’s performance over the past two weeks is nothing less than remarkable. The Blue Bombers have rallied to move from dead last in the league up to the number three spot in the West division.

This brief rally has dramatically boosted morale, temporarily halted sighs of discontent, and given hope to a fan base desperate for any reason to remain interested, especially given that the beer snake has been so unjustly eradicated.

Over the first four weeks of the season, it appeared as though the most popular form of fan entertainment at games was to call for the heads of coach Mike O’Shea and quarterback Drew Willy. Angry wails of dissatisfaction from the Bud Light-guzzling fans echoed through Investors Group Field.

The state of affairs is a far cry from where it stood a mere two weeks ago. Strong defensive efforts spearheaded by a tenacious linebacking crew are to be duly noted. A few Bombers are doing well on the league stage, as defensive lineman Jamaal Westerman places second in the league for sacks, and linebacker Ian Wild tops the league in tackles. Defensive back Kevin Fogg is not far behind him in the number four spot.

The Blue Bombers defense now ranks first in the CFL categories for forced fumbles, interceptions, and passes defended. If you would have told someone this information in week three, they would have called you crazy. This outstanding effort was apparent last Thursday night when Big Blue managed to hold Hamilton to a mere 11 points. Pinning the red-hot Edmonton offense to 23 points on July 29 is no small feat either. It appears that for now, the struggling defense we saw over the first four weeks has found its stride.

Offense is firing on all cylinders

Offensively it seems that the change up at the quarterback position has supplied the team with the intangible element that it was desperately lacking – intensity. The new knight in shining armor, pivot Matt Nichols, has brought new life into the Bombers offence. On the first drive of his initial start against Edmonton, Nichols paraded the offence on an 85 yard scoring drive, with big contributions from slotback Weston Dressler, who hauled in two passes for 60 yards – his first notable input thus far. That drive yielded the team’s only first quarter touchdown of the year up until that point.

The new vigor brought by the offence shouldn’t be entirely attributed to the change at quarterback. The offensive line has healed up since their week four walloping, and bought sufficient time for intermediate range pass plays instead of crumbling like a Nature Valley granola bar.

In addition, tailback Andrew Harris has been stepping up to the plate, and he is now second in the league with 382 rushing yards. The Bombers’ expensive offseason acquisitions are just now starting to pay their dividends.

From what we can gather, the performances of recent games reflect the way that the offence was designed to be run. Quick pass plays mixed with the occasional deep ball, effective blocking, and a competent running game create the type of fast pace and balance the team needs.

To address the recent alteration at quarterback, it would unreasonable to state that Nichols should have been the starter all along. What needs to be realized is that by statistical measures, Nichols is not superior to Willy. Not yet at least.

Last season in 2015, Willy finished the year with 1434 yards and eight touchdowns over just six starts before suffering a season-ending injury in week seven. Nichols managed 1757 passing yards and ten touchdowns over eight starts. So the statistics don’t heavily favor one over the other, except the fact Willy had a higher completion percentage (68.6%) than Nichols (60.6%) as well as 9.1 yards per completion versus Nichols’ 7.2. However, statistics can only tell you so much, and those statistics are a year old.

Nichols seems to fit offensive co-ordinator Paul LaPolice’s system significantly better. Nichols’ quick release, willingness to make risky throws, and his ability to buy time on his feet have served the team well when looking to build or maintain momentum. These are traits that for some reason Willy does not seem to possess.

With an inconsistent offensive line, Willy’s inability to scramble is possibly his biggest challenge, as it gets him sacked frequently, and ultimately subjects him to a risk of injury, as seen in 2015. But even with the recent success of Nichols, it would be a shame to see Willy be sidelined indefinitely. Being compensated with a $400,000 per year salary, he deserves more than to play second fiddle. Whether or not his future lies with Winnipeg is yet to be determined, but his competency as a quarterback has been showcased many times over the course of his carreer so far.

Since Oct. 2012, the Blue Bombers have started nine different QBs at least once. Here’s hoping that they have now found the stability they have desperately needed at the quarterback position.

Only the future will tell what lies in store for the 2016 Winnipeg Blue Bombers. The team and fans can surely find excitement in this temporary success, but it is still a long season ahead, and momentum can be shortlived.
The Blue Bombers gear up to take on the Toronto Argonauts for the first time this season next week. They will undoubtably be tested by the Argo’s experienced roster. With any luck, what we have seen over the past two weeks is merely the tip of the iceberg, and this may finally be the formula the franchise needs to become a consistent competitor.

Life on the road

Handing out the hardware — Predictions for the 2012 CFL Player Awards