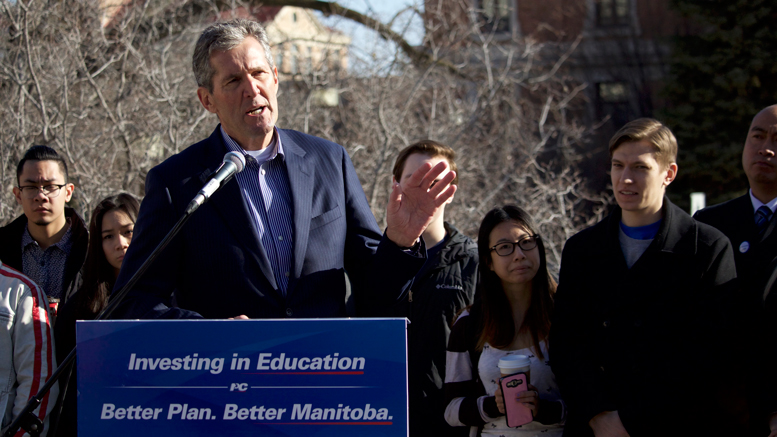 Brian Pallister speaking to students during the 2016 Manitoba election. Photo by Garett Williams

If elected into office April 19, a Progressive Conservative government will double the Manitoba Scholarships and Bursary Initiative to $20 million through increased private sector investment, leader Brian Pallister announced at the University of Manitoba March 27.

At a media event on the Fort Garry campus March 28, Pallister said a PC government would increase public support for the program to $6.75 million from the current $4.5 million and leverage the remaining two-thirds from private contributions.

“I want the barriers to post-secondary education and training to be lower, not higher,” he said, accusing the incumbent NDP government of decreasing support for the program, which currently gives students access to about $9 million in scholarships and bursaries that are administered through the province’s public universities and colleges.

Pallister said he has held discussions with Manitoba chambers of commerce and said there is a backlog of would-be donors looking to participate in the program. He didn’t comment on whether a PC administration would maintain Manitoba’s student loan program – which struck interest from loans beginning in 2015 – saying his goal is breaking down the barriers keeping students out of post-secondary in the first place.

“I think it’s putting the cart after the horse, in a sense, to address the follow-up situation before you address the actual barrier,” he said. “We want to reduce the barriers for entry. That’s where we’re focused.”

Pallister said the bolstered initiative would aid 3,500 additional high school graduates with more than $2,500 in support each.

“My concern is also that for many people that come from, in particular, not-advantageous financial circumstances, it’s important that they be able to consider this [post-secondary] as a viable option,” he said, noting the program is largely based on need.

“Scholarships and bursaries will help – they can make the difference for young people.”

The announcement came a week after the incumbent NDP announced its intention to convert Manitoba student loans into non-repayable grants, a plan supported by the Manitoba chapter of the Canadian Federation of Students (CFS-MB).

“I understand that they are fully in support of the status quo here in Manitoba and, of course, I’m disappointed to hear that,” Pallister said of the student organization, closing his press conference.

Michael Barkman, chairperson of CFS-MB, wouldn’t respond directly to Pallister’s remarks but said the students’ federation has been lobbying for debt-free university and college education for years.

“We think public education must remain a public good – and publicly funded – and government needs to invest in post-secondary education,” he said.

Barkman said the Progressive Conservative proposal raises questions and said he wonders where the private investment will come from and whether a PC government will reach the entire target of nearly $13 million.

Claiming students in Manitoba face a crisis-level $20,000 debt upon graduation, Barkman said the proposal falls short of the kind of government investment the CFS would like to see.

“We really need to see some strong leadership in addressing this,” he said, “and I don’t think this amount of money is going to quite adequately address the student debt crisis.”

In November, the Manitoba Liberals announced their own plan to invest $10 million currently set aside for loans into developing a non-repayable grant program.

Rise of the GPA