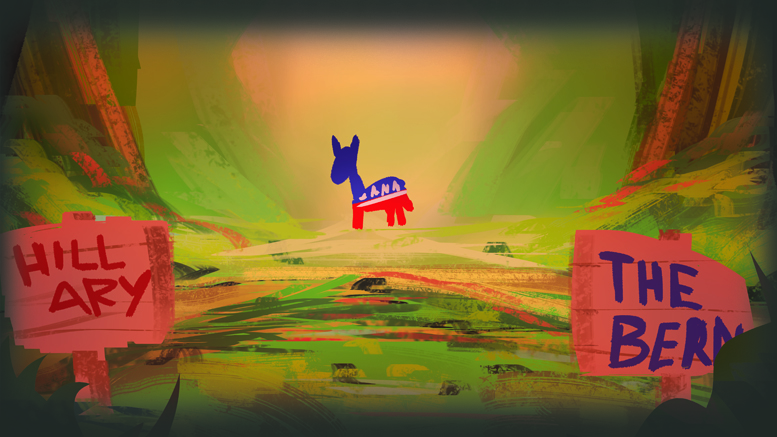 The 2016 U.S. presidential race is shaping up to be one of the most bizarre elections in recent memory. The nominee currently leading the Republican party is delusional racist peacock Donald Drumpf. The denizens of the Internet have gleefully seized upon a conspiracy in which Ted Cruz, another Republican nominee, is really the Zodiac serial killer of the 1970s, with Illuminati-esque memes popping up left and right.

And I, given the chance to vote for potentially the first female president in American history, am doing my best to elect another old, white man.

As Jill Patterson points out in her March 2 article “A vote for Clinton isn’t a vote for equality for women,” whether or not these two positions are contradictory has become a matter of somewhat heated debate. It’s true that older feminists see it as only right that women should support other women. And that’s generally a good sentiment. The divide comes up in regards to exactly how different from one’s own views a political candidate – for the highest office in the nation, no less – can be before solidarity is less important than politics.

But there’s a problem with just assuming that Sanders appeals to younger feminists (and young voters in general) solely based on his platform. By all accounts that’s part of his popularity, but the truth goes deeper.

Let’s look at other marginalized groups. Sanders has been supporting LGBTTQ* rights since at least 1983 when, as mayor of Burlington, Vt., he held the city’s first Pride parade. He voted against “Don’t Ask, Don’t Tell” in 1993, and the Defense of Marriage Act in 1996, which legally defined marriage as a heterosexual institution and allowed states to refuse recognition to same-sex marriages performed in other states.

Guess who signed both of those into law? Bill Clinton. True, Hillary Clinton’s husband’s views are not necessarily her own, but Clinton herself admitted to opposing gay marriage as recently as 2013.

I don’t know about anyone else, but I’m much more inclined to trust Sanders on his platform of social justice than Clinton given their pedigrees, even if feminism is completely taken out of the picture.

But that’s just LGBTTQ* matters. How about racial discrimination?

In August 2015, Black Lives Matter activists interrupted a rally where Sanders was due to speak and criticized his treatment of the issue. Sanders apologized, which is par for the course when politicians make a blunder. But here’s the difference: Sanders then hired Symone Sanders (no relation) to be his national press secretary.

Why is that important? Symone Sanders is a young black woman who left the Campaign for Juvenile Justice for Bernie Sanders’s campaign. She’s also a Black Lives Matter activist. And almost immediately after she joined, the Bernie 2016 campaign website released a comprehensive racial justice page.

In other words, when voters pointed out a problem with his platform, Sanders reached out to the affected community and listened to what they had to say. If he does this for one marginalized group, there’s an excellent chance he’ll do it for another.

For many young feminists, Clinton is too firmly entrenched in the politics of her husband’s era – and, indeed, the era of older feminists – because that’s when she really exploded onto the scene. Sure, she says she’s updated her ideas to be relevant now, but I’d rather have a candidate whose views have aligned with mine for a significant period of time.

Feminism is the idea that men and women should be equal. You can’t call yourself a feminist if your feminism does not include women of colour and their specific troubles, or those who fall on the LGBTTQ* spectrum and theirs. Every person should be equal to every other person.

With Sanders, there’s a precedent of change for everyone. With Clinton, there’s every chance it’ll be just for other white women.

Sarah Doran is an American student who will be voting in the upcoming election.

One nation under Trump: what are the implications for Canada?