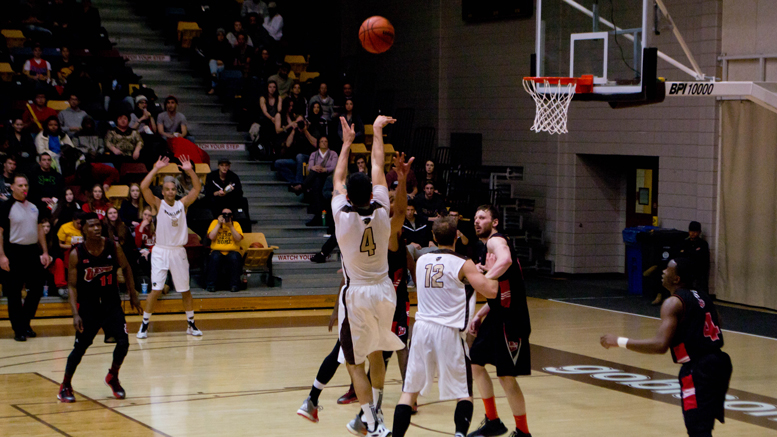 The University of Manitoba Bisons men’s basketball team accomplished a huge feat this past weekend, winning their first playoff series since the 2000-01 season. Not only did they win, they did so in emphatic fashion, sweeping a Fraser Valley Cascades team that has made four straight trips to the Canada West Final Four. The sweep was also the herd’s first since 1999-00 – the first year they joined the Canada West conference.

The herd dominated the opening contest, taking an early 9-0 first-quarter lead and never looked back, winning 78-59. Fraser Valley had numerous opportunities in the opening 10 minutes to take control of the matchup, however they couldn’t get any shots to fall. The visitors missed their first three shots – all clean looks – and scored just 10 points in the first.

Statistically, the game was relatively close. The Bisons had just two more rebounds (45-43) and neither team made more than two treys apiece, however it was the home side’s hustle and depth on the bench that made the difference.

The Cascades had copious opportunities for put-back points off offensive rebounds, but were simply unable to convert against the Bisons’ aggressive defense. Nate Brown – a commanding post player for Fraser Valley – was negated all game long by a combination of Wyatt Anders, Brett Jewell, and Jonathan Alexander, who was tremendous as a reserve once again and collected 12 points along with nine rebounds on the evening.

Offensively, Keith Omoerah and Anders were both strong on the glass, collecting nine and eight rebounds respectively. Anders – who hadn’t seen game action in over three weeks – collected a team-high 17 points and also got to the free-throw line four times due to his hard work down low.

“I think this recovery allowed me to be more aggressive – the shoulder and the hand weren’t really hurting and I was able to have more confidence,” Anders said post-game. “Obviously these guys [Fraser Valley] are talented, their whole starting lineup is talented, so when I’m bringing it, now we’re really tough.”

Game two was far more competitive, with both sides trading momentum at different times in the contest. The Cascades entered the fourth quarter down by nine, but were able to claw back in the final four minutes of play to force overtime. The Bisons were no strangers to OT basketball, though – hitting OT on four separate occasions during the regular season – and they emerged with the 77-72 victory.

The visitors led 23-18 after the opening quarter, but saw their advantage evaporate heading into halftime thanks to Jewell, who scored eight of his 12 points in the second quarter to give the Bisons a 38-34 advantage. The herd entered the final 10 minutes up 57-48, after a 10-point third quarter by AJ Basi, but couldn’t ice their trip to the final four, as Brown scored eight unanswered points in the span of just over two minutes to bring the Cascades within two.

Guard Kevon Parchment – the lifeblood of the Cascades all season – capped the comeback in the final seven seconds of play with a mid-range jumper that sent the game to OT tied at 64.

Justus Alleyn and Ilarion Bonhomme II took over in the five-minute extra session for the Bisons, scoring eight of the team’s 13 points in overtime and securing the Bisons’ trip to the final four. Alleyn used his speed and aggressiveness to drive to the lane and generate fouls from the Cascades, while Bonhomme capped the game with a three-pointer in the final 12 seconds.

Tale of two teams on the hardwood