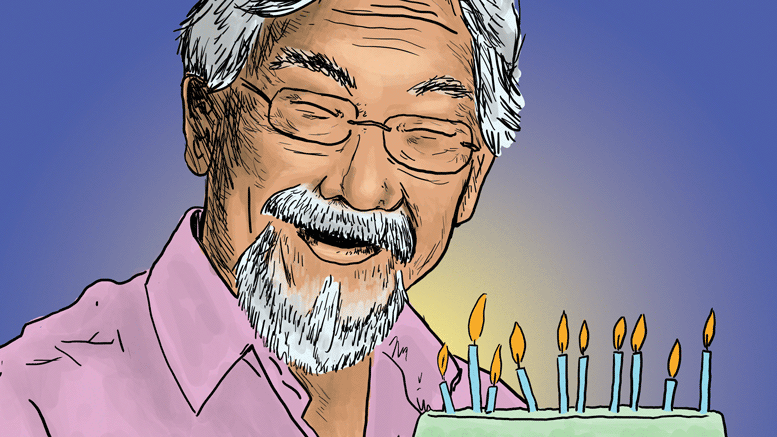 In his decades working as an academic, public broadcaster, and science communicator, Suzuki has become a household name in Canada and an icon of the environmental movement.

He’s left an impact on national discourses around the environment through his public education and advocacy, and has been appointed to the Order of Canada. In 2004, Suzuki ranked fifth in the CBC’s the Greatest Canadian television program, making him the highest-ranked living Canadian.

The Nature of Things – Suzuki’s science education television show on CBC – is what inspired me to start writing about science for the Manitoban. In honour of his decades of work, let’s take a look back at his life and accomplishments.

Suzuki’s grandparents moved to Canada in the early 1900s.

As Canadians of recent Japanese descent, Suzuki and his family were imprisoned in internment camps during the Second World War. Suzuki says this experience is part of the reason he fell in love with nature.

Suzuki was one of the only kids in his camp that was not bilingual. He was often picked on for his inability to speak Japanese, and so he spent a lot of time by himself in the woods, where he fell in love with the life of our world.

His appreciation of nature would influence his academic path. Suzuki received a bachelor of science degree from Amherst College in Massachusetts while riding a full scholarship.

Suzuki then went on to receive a PhD in zoology from the University of Chicago in 1961 after only three years of research – nowadays a PhD in the sciences averages around five years to complete.

Suzuki was a member of UBC’s genetics department for nearly forty years. He is currently a professor emeritus at UBC.

A geneticist by trade, Suzuki carried out research on the workhorse of genetics, the fruit fly Drosophila melanogaster.

Suzuki’s CV spans over 17 pages. His long resume even includes some surprises, like an album of children’s music called Space Child. However, he is most famous for his extensive involvement in science communication and environmental activism.

His forays into science communication began with a weekly children’s television program in the 1970s called Suzuki on Science. From there, Suzuki made the transition to radio.

Suzuki founded the radio show Quirks and Quarks in 1974. The show explores the quirkiness of our natural world as we learn more about it through scientific research – quarks, well, they’re small sub-atomic particles that make up larger sub-atomic particles like neutrons and protons.

Quirks and Quarks airs each Saturday at noon on CBC Radio One and is currently hosted by Bob McDonald. In between Suzuki and McDonald, Discovery Channel science communication veteran Jay Ingram hosted the show for more than a decade.

To celebrate his entry into life as an octogenarian, Suzuki returned to his broadcasting roots in an interview with Anna Maria Tremonti for CBC Radio’s The Current. The interview airs on March 24, and you can give it a listen on the Current’s website.

As well, he has written more than fifty books. Of those, 19 are for children.

Back in the 70s Suzuki represented a sort of counter culture in the academic environmental scene. With long hair tied back in a hairband, Suzuki looked more like a hippie than a geneticist.

In 1990, he founded the David Suzuki Foundation with some friends. The foundation was established to advocate for a number of environmental issues including sustainable fishing practices, climate change prevention, clean and renewable energy, and environmental sustainability.

Suzuki has been in Winnipeg a few times in the past couple of years in the name of the foundation.

Last fall Suzuki received an honourary degree from the University of Winnipeg. Suzuki was in town in part because Manitoba was the first province to sign the Blue Dot Declaration, a document outlining clean air, safe water, and a stable climate as a Canadian right. This coincided with the province announcing a $400,000 investment into the Prairie Climate Centre at the U of W.

Suzuki isn’t afraid to speak his mind. He has been vocal about his contempt for former prime minister Stephen Harper on many occasions over the past ten years.

“‘Twerp’ is a term of endearment,” Suzuki told This Hour Has 22 Minutes comedian Shaun Majumder. “Ask me what I call Harper.”

Suzuki clearly never wanted to be the science prophet that he has become.

“It’s something I do not wear well,” Suzuki told the CBC’s Ismaila Alfa.

“From day to day, people watch your show, they don’t remember what was on, but they remember you were on.”

Regardless, Suzuki in his 80 years of life has made himself a well-known name in Canadian environmental protection.

The art and science of making images from space