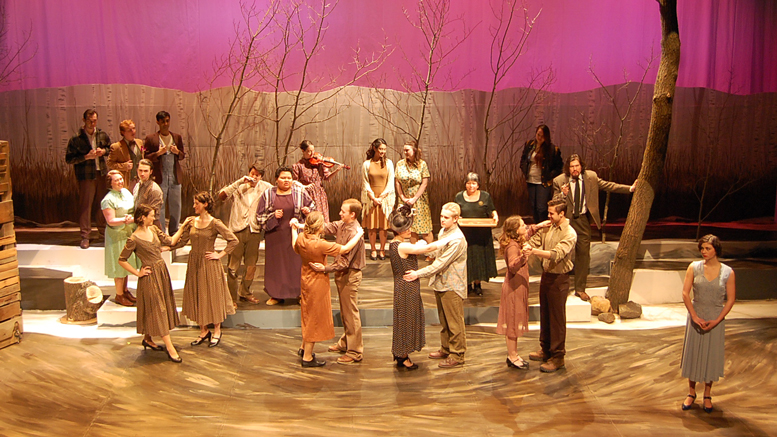 The U of M’s Black Hole Theatre Company (BHTC) is set to showcase the world premiere of a new play called Doubtful House, which will run from March 15 to 19 and 22 to 26.

Doubtful House was written by Governor General Award-winning playwright and U of M alumni Ian Ross, and will mark the grand opening of the new BHTC theatre in Tache Hall, officially named the John J. Conklin Theatre.

Doubtful House is set in the 1930s and takes place in Manitoba House, a 1797 trading post that eventually develops into the titular district. The events of the play, which revolve around the community’s love for their home and desire to create a better future, are reminiscent of Ross’ father’s stories about his hometown, Kinosota.

“I learned how to tell stories from my father. He would tell me all kind of wonderful stories about places I knew – that I [grew] up in – and of the past,” Ross told the Manitoban.

“That’s how the play began. I wanted to write something that honored him […] and where I came from.”

Over the years, Ross has made a name for himself as a talented writer producing both politically- and culturally-aware works. He has mentored several young writers in honing their skills and has emphasized the importance of having a creative process.

“My creative process, whether that is acting or directing, I liken it to kind of feeding goldfish in a tank,” said Ross.

“You springe the food from the top and it kind of flows down and it settles. That is kind of what it is like for me. I discover things as I go through the process.”

Ross studied in the department of English, film, and theatre during his time at the U of M and credits Chris Johnson – Doubtful House’s director and a professor at the university for about 35 years – with first igniting his interest in theatre.

“Chris Johnson is the man who inspired me to go into theatre as a student at the University of Manitoba,” said Ross.

“He basically forced me – and I do not mean this in a bad way – to perform a play that I had written, which led me to being a playwright.”

This play marks the first time Johnson and Ross will work together. Over the years, the relationship between the two has evolved from teacher-student to coworkers, and the duo relishes the opportunity to collaborate on Doubtful House.

“Oh, he is definitely my coworker now,” Johnson told the Manitoban.

As the play’s director, Johnson focuses on getting the cast to perform with conviction, confidence, and energy.

“We are always looking for how well students work together. We don’t cast individuals, we cast a cast.”

Doubtful House’s cast is comprised of both past and present BHTC members. Johnson believes the varying levels of experience amongst the students will only work in their favour, and will help the actors become better at their craft.

“At most universities you will have class productions, which means that nobody has more experience that you. There are some real limitations with that,” said Johnson.

“I like the way we do things […] all along, it has been encouraged for alumni to come back. It creates a better learning experience for the students.”

Doubtful House will run for 10 days in total, with a two-day break on the 20th and 21st. According to Johnson, back-to-back performances of this kind of length are key to an actor’s education and experience.

“There are things about acting that you can’t do anywhere else except in front of an audience,” Johnson explained.

“That is one of the reasons we have 10-day runs – which is a very substantial run and is more than a lot of universities do – because we have students [who need] to experience several audiences.”

For three decades, Johnson has been pushing for a change in stage venue and with the grand opening of the John J. Conklin Theatre, he’s anticipating immediate improvements in the university’s theatre program.

“It’s pretty common practice at other universities to have actors visit and perform shows at the university theatre. Our theatre program has had to struggle with a really inadequate space,” said Johnson.

“I think the students and faculty will be able to do better work in a better theatre. […] the old Black Hole certainly helped to develop concentration because the audience was so close to the stage, but ultimately it wasn’t very comfortable.”

Johnson hopes that the English, film, and theatre department will push on from the progress made and develop better programs to educate students on creative writing, dramaturgy, and directing.

Tickets to Doubtful House are $12 for students and seniors, $15 otherwise. To make a reservation, call 204-474-6880 or email tickets@bhtc.ca. For more info, visit www.bhtc.ca