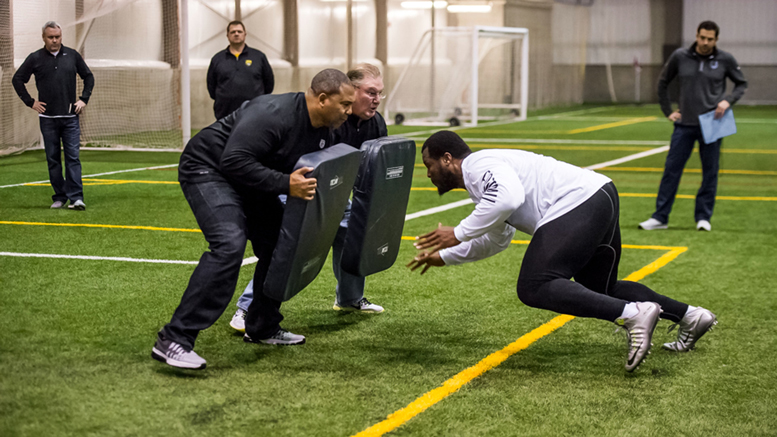 When David Onyemata came to Winnipeg, he knew nothing about football. He had never before strapped on the pads, let alone played a down.

Hailing from Lagos, Nigeria, where gridiron football is not the sport of choice, Onyemata had a lot to learn. In the span of four years, Onyemata became the best defensive lineman in Canada, and last Monday he had 17 NFL scouts watching his every move for his pro day.

During his pro day, which was the first ever held at the University of Manitoba, the six-foot-four, 300-pound lineman ran his 40-yard dash in 5.06 seconds and threw up a ridiculous 33 bench press reps of 225 pounds. Oneymata would have placed first in the bench press at the NFL scouting combine, and would have been among the top 10 with his 33-inch vertical jump had he been at the event.

The amazing part about Onyemata’s journey was how quickly he learned everything. He was doing things in his first couple years as a Bison that most players first do when they are very young.

“It was like a whole new reality for me,” Onyemata said. “I didn’t know they had plays and things like that. During my first practice there were times when I didn’t know what I was doing and everyone was laughing.”

In four years with the Bisons, Onyemata played in 31 of 32 conference regular season games and made a total of 102 tackles. He also had eight sacks, five of which came this past season. In seven playoff games, he made 32 tackles and added one-and-a-half sacks. He was a Canada West All Star in 2014 and 2015 and was a big part of the Hardy Cup-winning Bisons team in 2014.

In all eight games he started this season, Onyemata amassed 31 tackles, seven and a half tackles for loss, and a forced fumble and fumble recovery. These numbers were all earned whilst being double-teamed almost every single snap. Onyemata never grabbed any headlines this year with highlight reel-worthy plays but he was an anchor on a very strong defensive front for the Bisons.

With his strong play this season, Onyemata earned a spot in the East-West Shrine game where yet again he was double-teamed but managed one sack and was constantly pressuring the quarterback. He was also named the J.P. Metras trophy winner this past season as the best down lineman in the CIS.

Onyemata took tremendous strides in his career with the Bisons, something head coach Brian Dobie was extremely impressed with.

“If you break it down regardless of sport, for someone to come from the other side of the world and come to an elite, national-level program and not only compete, but to excel as one of the best players to ever leave the program is a crazy story,” he said.

“It took the Bison village to raise David”

Coach Dobie was filled with pride when talking about his prized defensive lineman.

“David is probably the biggest Cinderella story that you’ll ever see,” he said. “He faced a lot of adversity, but not the type of adversity we typically hear about, it was just his sheer innocence in not knowing anything about the game of football.”

Onyemata’s strength was his ability to learn, as his thirst for knowledge was unquenchable.

“That is part of the beauty that is David Onyemata, his ability and want to learn,” Dobie said. “That is something we tried to stress to the NFL personnel here. That is one of the characteristics that they learned about him at his pro day.”

Onyemata had tremendous help from his Bisons teammates and coaching staff during his journey. R.J. Skinner, a former member of the herd, had a particularly big impact.

“R.J. Skinner, who was injured at the time David entered the program, helped him every night, helping develop his fundamental skills, as well as the intricacies of the game. He deserves a lot of credit,” Dobie said.

Dobie stressed the fact there were many players out there helping David every practice, dedicating time to help the big man improve. At the end of the day, it is on the player to react to the coaching and help they get and Onyemata did just that.

“It was so many people inputting him appropriately to put him where his today,” Dobie said. “But, I will say that it was on David, how he reacted and adapted to all that information being thrown at him.”

The NFL at the U of M

The impact of having an NFL pro day at the University of Manitoba was a huge plus to the credibility of the program, as all eyes were cast on Winnipeg during Onyemata’s pro day.

“There was a huge buzz around the country during Onyemata’s pro day,” Dobie said. “If and when he makes the NFL, he will be the second defensive lineman this program has put into that league. We sort of have a reputation of being ‘D-Line U.’”

There are many notable Bison defensive lineman plying their trade in the CFL, such as Eddie Steele of the Edmonton Eskimos and his teammate Don Oramasionwu, as well as Bombers lineman Louie Richardson. Having a player like Onyemata leave the Bisons program only adds to the list of pro players that Manitoba has produced.

Another player that Manitoba produced was NFL star Israel Idonije, who also hails from Lagos and most notably made it to the Super Bowl with the Chicago Bears in 2006. There are a lot of similarities that can be drawn between Idonije and Onyemata. Idonije had very little exposure to the game of football prior to coming to the Bisons and excelled in a very similar way to Onyemata.

Onyemata had never heard of Idonije prior to coming to Manitoba and now the two communicate regularly.

“We text back and forth a lot,” he said. “Mainly about training and how they do things down in the States.”

This will not be the last time you hear about Onyemata, as he will most likely be taken in the upcoming NFL draft. We don’t know where yet, but this is only the beginning for the Nigerian native who will be looking to make his mark in the NFL soon.

For the love of the game

The best in brown and gold: 2013-14 Bison student-athletes’ contributions celebrated