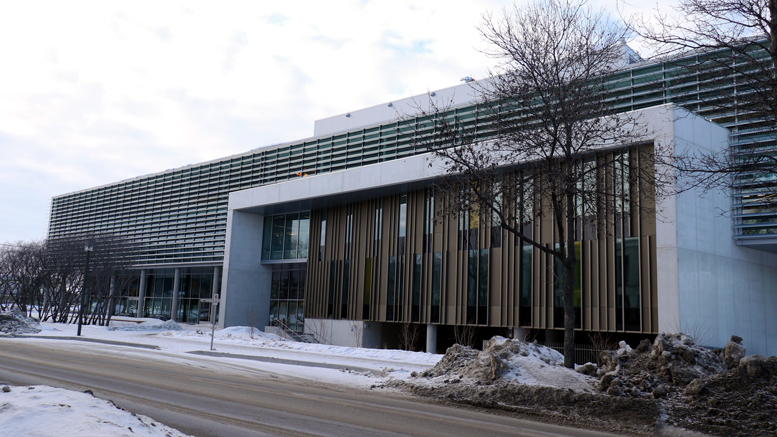 By Shreya Ghimire, with files from Ethan Cabel March 2, 2016

Catherine Peeler, a University of Manitoba business student and competitive body-builder, spends nearly three hours a day in the Active Living Centre (ALC) campus gym working on her physique – but she said she has been feeling more unwelcome after a body-shaming run-in with staff earlier this month.

In an email sent to the Manitoban, Peeler spoke out about an incident of alleged body-shaming she said she experienced from an ALC staff member.

In the email, which was sent at the beginning of February, Peeler states that she was practising posing for an upcoming bodybuilding competition in one of the ALC studios on the second floor when a male staff member approached her.

The staff member told her that she could not pose in that studio anymore because it was inappropriate and she was wearing too little.

According to Peeler, she was wearing shorts and a sports bra at the time – an outfit she said she has worn to the gym on multiple occasions. Peeler told this to the staff member and also pointed out that this was an outfit other women often wear at the gym.

The staff member then allegedly told her it was not so much her outfit, but her body that was “intimidating,” and that she could not practice posing because it may make others feel uncomfortable and unwelcome in the space.

“Everybody should be welcome at the Active Living Centre, regardless of your shape,” Peeler said.

“The gym should be a judge-free zone. But apparently my body makes others feel uncomfortable. I work extremely hard on my physique and it is a source of pride for me but the staff at the Active Living Centre make me feel unwelcome and it is becoming increasingly difficult to enjoy a sport that I love.”

As a bodybuilder, Peeler spends roughly three hours at the ALC daily.

“The gym is a place where I spend a large part of my day and it’s really important to me. If I’m not able to feel comfortable there, then that really affects my life,” she said.

When Peeler spoke to the facility’s manager, she said she was told she could not pose in that studio due to the footwear she was wearing, because the space is primarily to be used for stretching.

Peeler told the Manitoban that she understood this concern, but was confused as to why the staff member had not told her that and instead told her the issue was her body.

“The gym is a place I’m used to feeling at home but on multiple occasions I have been treated poorly by staff,” Peeler said.

As a business student at the U of M, Peeler said that she came forward with this incident because she is worried that staff members at the ALC are not receiving proper training in dealing with those using the gym.

She contends that because all students are required to have an ALC membership, there are too few standards when it comes to customer service.

Peeler pointed to the fact that she, like most students, would not be able to afford to go out and purchase a membership to another gym. This reduces competition and ensures that the ALC does not need to aspire to customer service excellence, she said.

“I know that they’re all kinesiology students with the knowledge needed to know how to work in a gym, but they’re just lacking the business side of it – how to deal with people and how to be appropriate in the workplace,” Peeler said.

“I want additional training for them and I want a manager who is setting direction that is fair for everybody who is going to be there.”

Janice Dodd, professor and coordinator of the department of women and gender studies at the U of M, told the Manitoban that such incidents are indicative of a tendency to police women’s bodies in Canadian society.

“There are situations in which women’s bodies are highly policed in our society and gymnasiums certainly fall under that category,” Dodd said, adding that traditional gender roles are also a factor in how women’s bodies are perceived and restricted by others.

“We don’t typically think of women being involved in that kind of body-building activity, but of course they should be able to do that if that’s their choice.”

Tanya Angus, the director of recreation programs at the U of M, oversees the staff for the Active Living Centre and other facilities. She told the Manitoban that the incident can be chalked up to a miscommunication between the staff member and Peeler.

According to Angus, the studio room Peeler was in is a new facility, and her shoes were inappropriate for the space itself because the space was created for the purposes of stretching as opposed to posing.

Angus said the ALC fitness attendant was most likely referring to Peeler’s footwear, and not her outfit itself, and that they did apologize.

Angus said that the incident was not meant to be a case body shaming.

“We definitely support an inclusive space for everybody at the ALC,” she said.