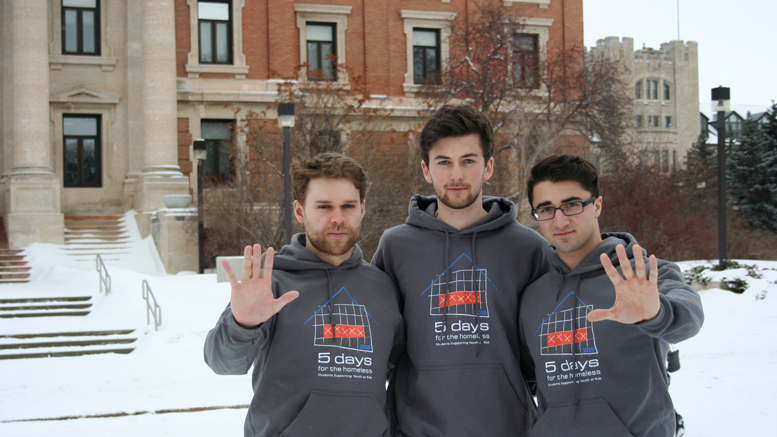 From March 7 through 12, six University of Manitoba students will be living outside as part of the 5 Days for the Homeless initiative.

5 Days for the Homeless was founded by the University of Alberta’s school of business in 2005. The initiative quickly caught on, and business schools across Canada started taking part. Five “sleepers” live outside for five days to simulate the experience of homelessness in an attempt to raise money for local charities supporting homeless individuals, as well as raise awareness of the stigma surrounding homelessness.

This year, the co-ordinators for 5 Days for the Homeless have added extra events to try and make more of an impact and attract a larger crowd – including a five-kilometre run and a performance fundraiser.

The U of M chapter has set a lofty goal of $25,000 for their eighth year participating in the nation-wide initiative – $5,000 more than last year’s goal. All of the money raised throughout the campaign period will be donated to Resource Assistance for Youth (RaY), a non-profit organization working with youth experiencing homelessness in Winnipeg.

RaY, in addition to providing homeless youth a safe place to have a meal, take a shower, and do their laundry, also provides valuable resources such as job training. RaY also works with homeless youth and local landlords to help them come to a rental agreement and secure a place to live, in addition to addressing the issues associated with living in a harsh environment that leads to the individual being homeless at a young age.

“RaY does a lot of great things there. We got to do a site visit and chat with some of these homeless youth. It was really a paradigm shift for me – it changed my perception to see how real it is,” said the U of M’s 5 Days for the Homeless co-chair George Semchuk.

“These people are our age, and doing this campaign of simulating the experience to raise awareness for it here at the university is a great way to help out and give to that awesome charity that supports those youths,” he added.

Semchuk’s co-chair, Myles Dancho, agrees. After being involved with the initiative for two years collecting donations, he has nothing but good things to say about 5 Days for the Homeless, and the beneficiary.

“I got to know RaY really well and got to see what they do firsthand – they do have a big impact,” said Dancho.

Cam Teschuk, one of the sleepers this year, is also excited to get involved with the campaign.

“This is an initiative that I’ve seen grow and evolve every year that I’ve been at this school, and it’s always something I’ve wanted to be a part of because it’s such a good cause – it’s an initiative that I care about. To have that experience as I’m now going into the workforce and moving on will help me spread what I’m going to learn to other communities outside the university,” he said.

As for the organization benefitting from the campaign, Teschuk couldn’t be happier.

“I think what distinguishes this campaign from Siloam Mission and Winnipeg Harvest initiatives is the fact that it is directed at youth and people our age. When you go to those bigger charities and shelters, you see a lot of older people and people who have struggled with homelessness for a long time and you almost feel detached from them. But what’s unique about RaY is that you’ll go and meet someone who’s been touched and affected by RaY, and it could be someone that you’ve met in class one day – that’s what it really feels like,” he said.

In his experience with the campaign over the last few years, Dancho has also noticed the amount of stigma surrounding homelessness, and around the campaign specifically, which they are looking to address this year.

To prepare for the upcoming week of fundraising, Semchuk and Dancho have been working closely with the University of Manitoba Students’ Union, and current president Jeremiah Kopp specifically, to try and establish corporate sponsors. But, according to the co-chairs, the main focus has been raising awareness and promoting campus-wide involvement.

“The overarching goal is definitely awareness, and full-campus involvement. Though it is facilitated by the Asper school of business and the Commerce Students’ Association, that’s the way it’s been set up, our big thing this year has been to make it campus-wide. We’re trying to make every single faculty involved as much as we can, and make every single student aware of what we are doing and that it is benefitting local youths experiencing homelessness,” Dancho said.

“Once there’s that awareness out, people are very happy to help the cause. It is a great cause – it’s just a matter of making people aware of it,” added Semchuk.

Teschuk’s experience of preparing for the initiative, he says, has been quite the opposite of Dancho and Semchuck’s experience on the administrative side.

“The only real preparation that I have done is talk to people and try and raise awareness, just letting people know about the campaign who haven’t heard about it before and trying to get more people involved outside of just the Asper school,” said Teschuk.

5 Days for the Homeless is taking place from March 7 to 12. For more information, or to donate, visit 5days.ca/schools/university-of-manitoba

Rape culture on campuses a reality