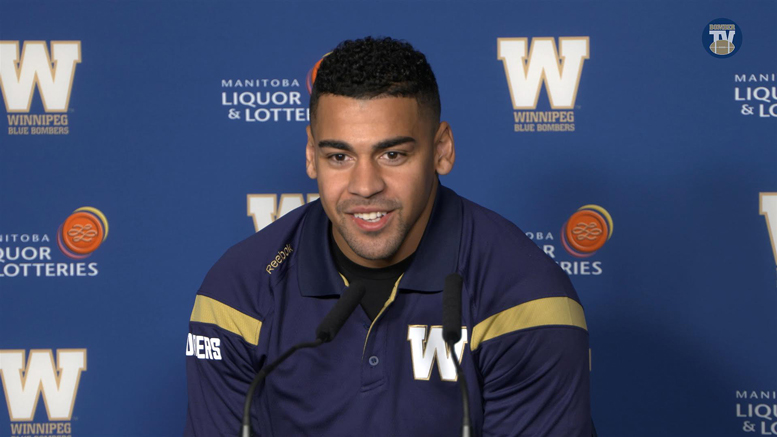 Arguably the biggest addition the Bombers have made this offseason, however, was bringing in national running back Andrew Harris – a Winnipeg native who grew up playing high school football at both Grant Park and Oak Park.

In his six-year CFL career – all with the BC Lions – Harris has become one of the most versatile players at his position, amassing 4,259 rushing yards to go with 2,639 receiving yards. His three-year deal with Winnipeg gives the Bombers their first “franchise” running back since the days of Charles Roberts.

It’s no secret that Winnipeg has been trying to corral Harris for a number of years, and chances are they’re still a bit bitter about the fact that they couldn’t draft him due to being a territorial exemption coming out of the Vancouver Island Raiders junior football program in 2008.

Regardless of prior circumstances, he’s here now and couldn’t be any happier. For Harris, the decision felt right both for his career as well as in his own personal life, as his eight-year old daughter resides in the ‘Peg.

“Being closer to her was a big factor in deciding this and I just think the organization is going in the right direction and it was the right timing for a number of reasons,” Harris said via conference call.

At 28 years old, Harris is in the prime of his career. His maturity and leadership as well as his ability to be an every-down back is invaluable – specifically in the passing game where the Bombers have struggled to keep their pivots upright.

“To be a good running back in this league you have to have three amazing factors – running, catching, and being able to block – so for me I definitely feel like I can utilize all of those skills and I just want to be able to get on the field and make impact plays for this team,” Harris said.

The signing of Harris goes far beyond an organizational perspective. It also gives life to a fan base that hasn’t had much to look forward to over the past four seasons. This city knows the name Andrew Harris: simply putting on the “33” in blue and gold will generate increased ticket sales and also likely encourage season ticket holders to come back for the 2016-17 campaign.

Expectations are at an all-time high for a community that hasn’t seemed close to enough winning sporting-wise over the past two decades. With the amount of firepower general manager Kyle Walters has brought in thus far, it’s clear that the goal is to end that slump sooner rather than later and bringing in Harris is just the icing on top of the cake for the Blue Bombers.

Anyone can predict a Grey Cup season during free agency, but it’s a heck of a lot harder to actually follow through with that once the season begins. Regardless as to what happens in 2016-17, one thing is for sure: on paper, Winnipeg has improved this offseason. Now they must walk the walk in the regular season.

Man of the hour