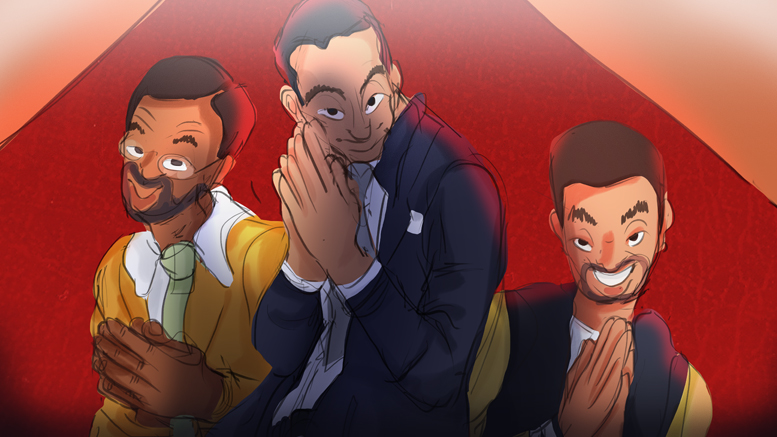 It’s finally February, which means that the Academy Awards are right around the corner. There are a number of Oscar-contending films currently playing at a theatre near you that rightly deserve your attention in what has been another remarkable year for movies.

With those thoughts in mind, naturally, my attention this past weekend turned to the new Marlon Wayans parody film, Fifty Shades of Black.

In the same vein as Scary Movie, Vampires Suck, Meet the Spartans, and Dance Flick, Fifty Shades of Black is a parody of the book and movie that launched a thousand whips, Fifty Shades of Grey. Marlon Wayans (who also co-wrote the film) stars in the film as Christian Black, with Kali Hawk playing the object of his bondage-filled desires, Hannah. Michael Tiddes of A Haunted House and A Haunted House 2 fame occupies the director’s chair.

Fifty Shades of Black follows the same basic story structure as its source material. Following in the general tradition of spoof films, it lifts certain shots and set-ups directly from the film it is parodying. In that regard, if you haven’t yet seen the Fifty Shades of Grey movie, then many of the jokes in Fifty Shades of Black will make little sense to you.

If you are one who has had the unique pleasure of seeing Fifty Shades of Grey, you may be asking yourself this: given that Fifty Shades of Grey is at times unintentionally hilarious and absurd in its own right, was it really necessary to create an entirely separate spoof film to point out its flaws?

Having now seen Fifty Shades of Black, the answer, without question, is no.

The film relies heavily on humour that is usually rooted in racism, sexism, or some combination of the two, and strives for relevance by trying to cram in as many references to current pop culture as possible, whether they relate to Fifty Shades or not.

Whether it’s Christian Black’s shady past as a stripper being explored through an extended Magic Mike spoof sequence, or his sexual awakening at the hands of an older woman seen through a parody of the infamous classroom scene in last year’s Whiplash (“Were you rushing or were you dragging?”), these clumsy jokes are thrown at the viewer with all the subtlety of a sharp slap on the behind from Christian himself, and are just as painful and uncomfortable to endure.

The jokes in this film aren’t just unfunny; they’re too easy. Things that were glaringly obvious in the original Fifty Shades film (Christian is creepy! Anastasia has no personality!) are played up in this parody without the joke ever really going anywhere. At one point when Hannah accuses Christian of being a stalker he claims to have “three restraining orders, working on a fourth,” and that’s the entire punchline.

As a whole the film reeks of unrealized potential for not really sinking its teeth into say, the many misogynistic and abusive aspects of the original Fifty Shades franchise, and instead relying on ugly, low-brow humour that is all shock with no substance underneath.

Try to let that sink in.