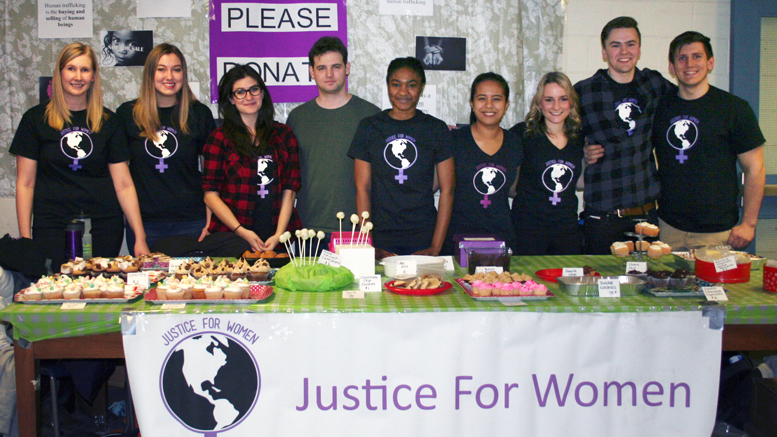 “Having this group and being quite active on campus allowed many students to identify me as someone they could go to for resources or support. And so I received, over the past few years, many, many disclosures of sexual violence and I wanted to do something about it,” said Robert.

“I hear of people who have to sit next to someone who has assaulted them in class or it’s happened at student residency or at an athletic event or a social event put on by faculty councils. I wanted to get this proactive programming that addresses the issue before it happens, to try and minimize the incidents that are occurring.”

Robert eventually decided that the best way to try and combat these issues was to run for womyn’s representative for the University of Manitoba Students’ Union (UMSU), allowing her voice to be heard louder.

“I just felt that being on UMSU council would allow the message that our team is trying to promote would be able to have an even stronger voice and presence here on campus. We really wanted to take this work to the next level and have stronger representation on UMSU council.”

Robert is focusing her efforts as womyn’s representative on mitigating instances of sexual violence and assault, with consent being the underlying theme of her projects this year.

The primary initiative for Roberts and her team has been implementing consent culture workshops to present to various student groups and student associations this year as an effort to combat sexual violence on campus.

“The big initiative we focused on this year was addressing a shortcoming in programming on both the part of the administration and of our students’ union,” she said.

“We designed these workshops, which are 90 minutes long and cover topics like power and violence, gender stereotypes, sexual assault, and consent. They also equip student associations with action plans and tools that they need to integrate this into their programming and their events to further mitigate the sexual violence on campus.”

Robert and her team trained student facilitators to deliver the presentations. Typically, both a male and a female student will lead the presentation together, going through various topics of discussion regarding gender and power, and the implications of the relationship between the two. The workshops also aim to focus on specific situations affecting university students directly.

“We do a lot of discussion – it’s not us lecturing at the students, but us facilitating a dialogue about why we think the way we think and why we do some of the things we do,” she said.

“Really getting them to think about these everyday actions so that we can ensure we ask first, ask always, which is the sentiment of what we’re trying to get across through this programming.”

In addition to the consent culture workshops, Robert has also organized several other initiatives, including an upcoming event in support of the missing and murdered indigenous women in Canada and a recent bake sale to support the Sera Project , which helps support victims of sexual exploitation.

“This is going to draw students from all across the province to join the movement, learn how to create action plans, learn how specific demographics of women – so women with disabilities, indigenous women, and racialized women – are at a significantly higher risk of experiencing sexual violence, learning how to create safe spaces, self-care, the impacts of colonialism, and really just educate students and equip them with the tools they need to make positive changes on their campus.”

Robert still has her work cut out for her for the remainder of the school year. Before the school year comes to a close, she wants to implement a new policy on campus.

“I want to propose a policy at UMSU council where it is mandated that all student councils get consent culture training – and to get the training before the school year starts because the highest instances of sexual assault happens within the first month of school – so that they can be equipped with these tools to mitigate the risks in their councils, but also to connect their student constituents with resources that they might need for support,” she said.

“I really just want to ignite this movement on campus – talks about consent culture, talks about what sexual assault is, where to get resources, and really, ultimately, beginning the movement to combat rape culture.”