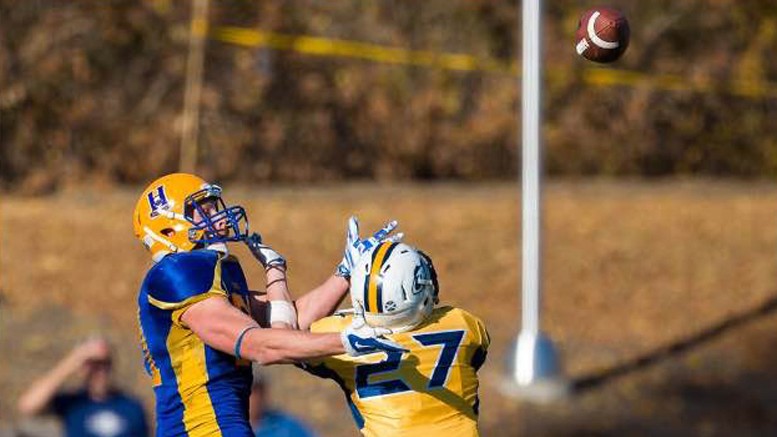 It’s not often that you get the opportunity to play football on the same team as your older sibling – especially when the latter is four years older. For Des Catellier, however, that rare occasion will occur in 2016 as he joins his older brother Luc on the Bisons football team.

Luc – an Alberta Golden Bears and Edmonton Wildcats alumnus at cornerback – joined the Bisons for the 2015 season as a redshirt. At six-foot-two and 190 pounds, he’s got the size to be an elite-level defensive back, playing the game with physicality and aggression.

Des, on the other hand, is a recent high school graduate from the St. Francis Browns in Calgary who led his squad to the Alberta Tier One Provincial Championship this past season. He’s also an elite-level punter and earned the honour of being named a Canada Football Chat Top 100 prospect (41st overall) during the 2015 season.

Neither brother fully immersed themselves in the sport of football until slightly later on in their youth, making their progression as players that much more impressive.

“I started pretty late. We both played high-level hockey and soccer from a young age and football was sort of an afterthought,” Luc said. “I started playing tackle football in Grade 9 after several summers of playing flag football. Des definitely benefited from being the second child – he started playing the following season when he was in Grade 6.”

Being the younger sibling, Des certainly benefited from the tutelage Luc gave him over the years, which has helped him develop into the player he is today.

“We’re always going back and forth trying to improve our games,” Des said. “Luc is always showing me my tendencies that may give away who I want to throw to, or if the play is a run or a pass. Luc will also help me with game prep by watching film and helping me see what the defence is trying to do.”

Luc has also coached his brother in the past and provided assistance wherever needed.

“Being four years older, I’ve always felt like somewhat of a role model to Des. I was his coach for his three years of junior high flag football as well as helping out at practices with St. Francis whenever I was in town during a season of his,” Luc said.

“I have always pushed myself to set a good example for him. He surpassed my quarterback knowledge years ago, but I watched film of his games weekly and gave him whatever tips I could about what tendencies I saw in opposing defenses.”

Because Des has established himself as a reliable pivot, most of Luc’s tips for him are based around pre-snap reads.

“I’ll tell him if he has any tendencies to eliminate such as looking at your primary receiver pre-snap or licking your fingers before passes but not running plays, as well as what keys to look for in the defence to know if it’s man or zone,” Luc said.

Despite being the younger sibling, Des has also been able to aid in Luc’s game. It’s a very interesting dynamic, as the two play positions that require them to study the actions of the other, in the common “quarterback versus defensive back chess match.”

“I try to point out things that Luc does that could tell a quarterback if it’s zone or man on any play,” Des said.

Des’s pointers don’t go unnoticed or unappreciated by his brother.

“Des has pointed out ways for me to be less predictable with disguising my coverages as well as explain how offences use certain concepts to exploit weaknesses in certain coverages,” Luc said.

Being able to play together means the world to both brothers, and Luc’s evaluation came with tremendous humility, touching on how impressed he’s been with Des’s skill set.

“From a football standpoint, we have recruited arguably one of the best quarterbacks in the nation from a city with a team that has dominated for the past decade and that he grew up watching,” Luc said.

“This is a big deal for this team because Des has a chance to be the face of this team down the road. Hopefully we can get some matching Vanier Cup rings before this is all over.”

A Loser in week one? Patience, grasshopper

The Reality of Storm Chasing