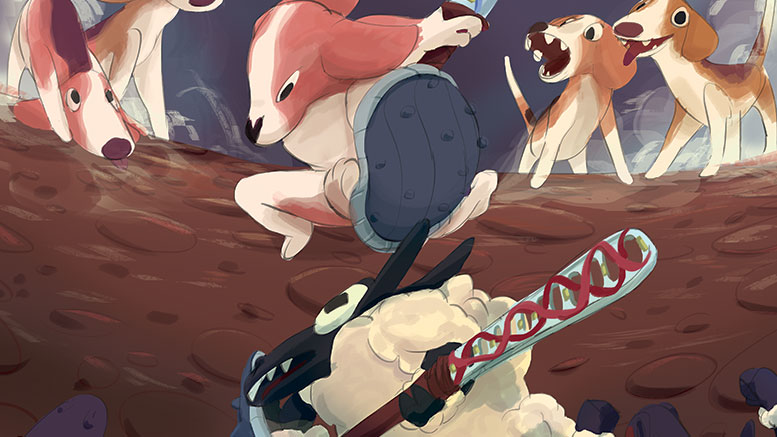 Early in 2015, the Manitoban’s science and technology editor Chantelle Dubois wrote a piece on the future of creating designer babies – children born with desirable traits selected by their parents. This possibility is all due to a molecular tool called Clustered Regularly Interspaced Short Palindromic Repeats (CRISPR).

The year 2015 turned out to be a whirlwind year for the up-and-coming gene editing tool – and yes, it is pronounced like the baked, not fried, snack.

Although the DNA sequences which lend CRISPR its name have been researched since the late 1980s, the CRISPR system was first noted by researchers at a yogurt company as a bacterial defence mechanism against viruses in 2007.

The CRISPR system uses a molecule of guide RNA, which directs CRISPR-associated proteins (Cas), typically an enzyme with DNA-cutting activity, to a specific sequence of DNA that matches the sequence of the guide RNA.

The chunks of viral DNA act as the source of these guide RNAs, and allow the Cas enzymes to search and destroy the DNA of any other invading viruses.

To use the CRISPR system in the lab, all researchers have to do to carry out gene editing is design their own guide RNA. CRISPR is useful because it is cheap, quick, easy to use, and can be applied to any organism. Researchers are no longer bound to common model organisms like mice.

CRISPR’s potential in revolutionizing molecular biology has resulted in it being named Science’s 2015 Breakthrough of the Year.

The most fascinating achievements using CRISPR in 2015 were also the most controversial.

Using CRISPR, researchers developed a gene drive, which has the capability to eliminate pests and the diseases carried by gene vectors, amongst other things.

Gene drives work by creating a genetic modification in an organism that is likely to be inherited by the next generation. The edited organism would then pass on its modified genes to its progeny.

In 2015 a gene drive was applied to mosquitoes, editing their gene vector so that they become immune to the malaria parasite.

The same mosquitos were also modified to cause females to become infertile through the disruption of egg production.

These gene drives have not yet left the lab, and many researchers are wary of the release of these technologies out into the wild, as they may disrupt ecosystems in unwanted and unexpected ways.

For example, the elimination of certain pests may create a favourable environment for other pests to arise. These population changes may also disrupt the food chain, negatively affecting higher-standing predators.

The year 2015 also saw the first instance of using CRISPR to purposefully alter the DNA of human embryos. This work – carried out in China – was done on nonviable embryos, but the controversial nature of the research prompted an international summit in early December to discuss the ethics of human gene editing.

The International Summit of Human Gene Editing concluded that using CRISPR to create genetically-modified babies is irresponsible until the process has been optimized for safety and until there is social consensus that this technology is desired.

“The human genome is shared among all nations,” said David Baltimore, a Nobel Prize laureate, told media at the summit.

One major ethical concern is that designer babies could create and exacerbate social inequalities and discrimination.

“Every new technology holds out the possibility of aggravating inequality in a world already marked by indefensible inequalities. But, if the benefits of the new technologies are diffused among those currently languishing ‘at the bottom,’ it’s possible that we might be able to promote societies with greater social and economic justice,” says Arthur Schafer, professor and founding director of Centre for Professional and Applied Ethics at the University of Manitoba.

“It’s up to us, the privileged and wealthy parts of the world, to ensure that new technologies are not monopolized by the already privileged but are instead used to promote a world of greater justice and fairness.”

The summit concluded that it supports basic research to perfect the CRISPR technique, including research done on nonviable human embryos.

The summit also concluded that CRISPR should be used in the treatment of genetic conditions in non-reproductive cells in adults. For example, by editing blood-forming stem cells, sickle-cell anemia and other blood disorders can be treated.

Some worry that the field of CRISPR research is moving too quickly to properly address ethical and safety questions regarding the technique.

Others worry, however, that banning heritable gene editing research may push such research to black markets and countries with unregulated scientific and medical jurisdictions.

The CRISPR system is not perfect, sometimes introducing changes elsewhere in the genome. Experiments have resulted in non-specific activity rates, which are changes in the genome that can easily cause cancer.

As we enter 2016, we won’t be seeing any designer babies. What we will see, however, is a zoo of novel genetically modified organisms. So far researchers have developed beagles and sheep that look like they hit the gym every day, pigs that may be suitable for safer organ transplants in humans, and wheat resistant to disease-causing fungus.

The year 2016 may also see CRISPR giving us hypoallergenic peanuts, dogs, and cats, oranges enriched in vitamins, and cattle resistant to tuberculosis.