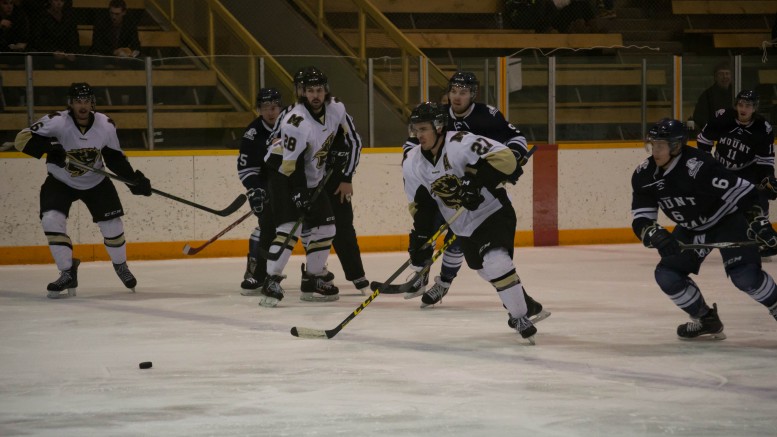 On Saturday, the University of Manitoba Bisons men’s hockey team played their second game of a two game series against Mount Royal. The Cougars took all four points from the weekend, as they completed the weekend sweep with a 3-1 victory on Saturday.

The first period was a scoreless affair that saw both teams get chances.The Bisons top line of Brett Stovin, Jordan DePape, and Jesse Paradis were buzzing all period, generating many good scoring chances.

The Cougars outshot the Bisons 14-6 in the first, but it could have been worse if not for the excellent shot blocking by Manitoba – particularly Shaq Merasty and Adam Henry.

Forty-six seconds into the second period, the Cougars broke the 0-0 deadlock when Connor Rankin showed some great patience on a 2-on-1 and slid a pass around Henry to find Cam Maclise who tapped the puck past Bison goalie Byron Spriggs.

The herd would draw level with 56 seconds remaining in the second when DePape picked up a loose puck after a scramble in front and put it up and over Colin Cooper. With the goal, DePape extended his point streak to an astonishing 15 games and currenty leads the Canada West with 33 points in 21 games (13G, 20A).

Mount Royal would regain their lead before the period was up however, when third year Cougars forward Tanner Olstad slid the puck five hole on Spriggs.

The third period saw the Bisons put tons of pressure on the visitors, but failed to get the tying goal. Mount Royal tried their best to put the game away, including a failed penalty shot attempt but finally sealed the deal with an empty net goal with three seconds remaining in the third.

“I thought we were better today, we cleaned up a lot of things from Friday night,” he said. “Mount Royal are a very hard team to play against, positionally they’re solid.”

Sirant also talked about the intensity level of the games ahead and the toughness of their schedule coming up.

“These are the types of the games we are going to play, for the next eight games down the stretch, it is going to be tough,” Sirant said.

The Bisons head to Lethbridge next weekend to play a two game set against the Pronghorns.