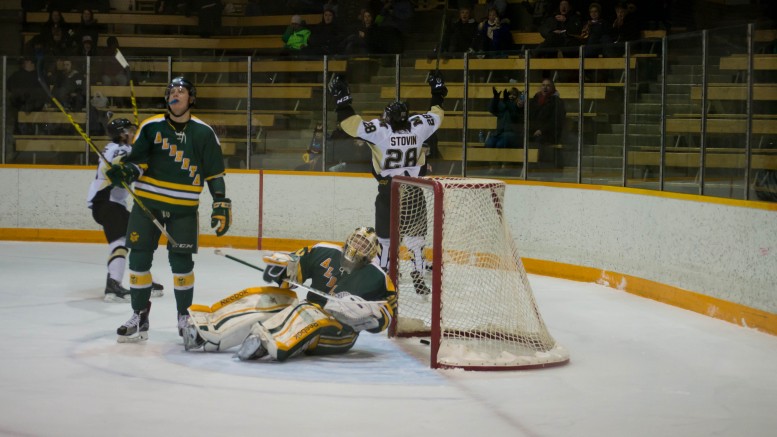 The University of Manitoba Bisons men’s hockey team opened up the 2016 calendar year with a clash against the defending CIS champion Alberta Golden Bears, coming out on top 7-4 on Friday night at the Wayne Fleming arena.

A wild first period saw the pair of teams combine for four goals. Manitoba opened up the scoring when Brett Brooks finished off a rebound after Jonah Wasylak came barreling in on a breakaway and whiffed a shot on a rolling puck. .

The lead wouldn’t last for long however. After a beautiful string of passes, Jordan Hickmott made a nifty forehand backhand deke to roof it past a helpless Byron Spriggs. Eleven seconds after that, the hot handed Jordan DePape came streaking in on the right wing and blasted a shot through the wickets of Bears goaltender Luke Siemens. DePape has now registered a point in the last 12 games – a Canada West best.

Captain Luke Paulsen took a bad penalty midway through the first period, and the Bears capitialized, James Dobrowolski sniped a shot glove side from the slot tie the score at two a piece heading into the break.

The second period echoed the same storyline as the first. Wasylak got the Bisons back in front when he fired a shot over the shoulder of Siemens from the top of the circle – his first goal in a Bison jersey. Riley Kieser tied things back up for Alberta at 7:36 of the middle frame, picking up a rebound in front of the net and with his long reach, wrapping it around a sprawling Spriggs. Three minutes later, the Golden Bears would earn their first lead of the night when veteran defenceman Thomas Carr fired a low, hard shot from the blueline.

With five minutes remaining in the frame, rookie Brett Stovin would extend his point streak to an astonishing 10 games, notching his ninth goal of the season after flicking a rebound in from close range following a Lee Christensen point shot.

The home side exploded in the third frame for three unanswered goals, including two consecutive powerplay tallies..

Three minutes into the period, Channing Bresciani ripped a shot home from the point to make it 5-4 for the home side. Minutes later, Shaq Merasty buried a DePape feed into the slot to double Manitoba’s lead.

Rene Hunter finished off the scoring with some nice patience in the slot, wristing home a shot far side on Siemens, who was then pulled after allowing his seventh goal on the night at 10:56. The Bears pushed hard in the last ten minutes of the game, but some solid defensive play and some key saves from Spriggs were enough to see Manitoba through.

Head coach Mike Sirant talked post game about the successful start to the second half of the year.

“It was a team win,” he said “I thought everybody on our team did their job and played their role [ . . . ] We did the things that we identified we needed to do to be successful, we played our game and it was really good to see our players rewarded for their effort and performance.”

The Bisons play the Bears Saturday afternoon at 4 P.M in the second half of the back to back at Wayne Fleming.