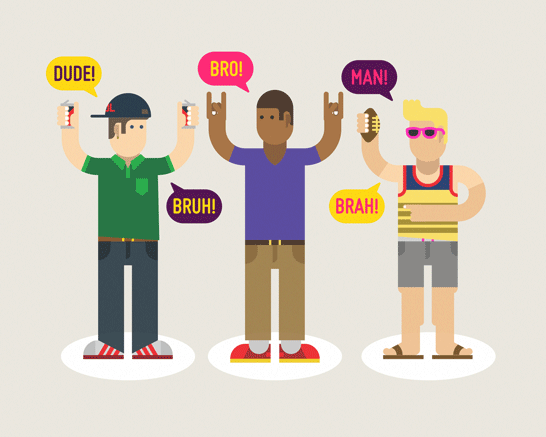 Matthew Urichuk is a third-year linguistics studies student at the U of M who conducted a research study on the use of “dude,” “man,” “bro,” and “brah/bruh” in conversations. The research was conducted under the supervision of U of M linguistics professor Verónica Loureiro-Rodriguez.

Urichuk’s interest in conversations and contemporary word usage may seem unique, but it is not unprecedented. The former computer science student developed a genuine interest for linguistics after learning an additional language.

“It wasn’t until my second year, when I took an intro to linguistics course, that I started realizing that ‘hey, this is interesting and this is what I actually enjoy,’” Urichuk told the Manitoban.

“I just think it is interesting how everyone communicates with one another [in any language]. There’s always communication that happens between people and being able to study conversations that go on between two or more people is interesting.”

In 2003 Scott F. Kiesling, a professor at University of Pittsburgh, published his study on the titular word, Dude. With reference to this word and observational data gathered, Kiesling studied the listener-speaker relationship and interaction.

The study and project inspired Urichuk to broaden the scope of Kiesling’s study and probe into the use of dude and its modern variations – “man,” “bro,” and “brah/bruh.”

Last June, he decided to design a research study with new sample data to analyze these terms. So far, the research has been presented at a few conferences and was recently submitted for a journal entry.

Like Kiesling, Urichuk was interested in the listener-speaker relationship. He wondered if people speak differently depending on who is listening and how this affected word usage.

To conduct the research, Urichuk ran a survey through a Facebook group of interested participants, primarily from Manitoba. He advertised the survey by putting links to it on a few Manitoba-specific Internet forums.

A good number of participants – more than Kiesling’s sample size – consented to the anonymous publication of the study’s results and completed the survey online.

“We ran statistics on a lot of the data and made sure it was statistically significant – there was a large enough sample size. We ended up running statistics on 250-260 respondents.”

There are number of factors that could influence how a person speaks to the listener and their choice of words. Urichuk’s research has considered a range of factors including – but not limited to – ethnicity, gender, age, and race.

“Male-to-male usage, as was found in Kiesling’s study, was the most popular,” said Urichuk.

“Then it’s female-to-male – which was actually the opposite of what Kiesling found […] Then we found that male-to-female interactions were by far the least common.”

Urichuk believes that there are a lot of preconceptions about these words. Their usage could be associated to a certain gender, age, or race. So far, the results of his research have refuted some of these beliefs.

“There was no connotation between race and the usage of these words. A lot of the time, people can preconceive that a certain race, or gender, or age group use certain terms. In our data, there was nothing statistically significant to [prove this].”

“It kind of shows people that, hey, the preconceived notions you have about languages, societal classes, or race may not actually be accurate […] Also, we shouldn’t necessarily base someone’s intelligence on the use of these terms.”

As the research’s supervisor, Loureiro-Rodriguez plays the role of guardian to Urichuk’s undertaking.

While Urichuk conducts the survey and statistical analyses, she provides him with advice and articles on methodology. She believes the study is essential and would be enlightening, especially to non-linguists.

“I think it is going to make people think a little bit more about how they use language and be more conscious about it,” Loureiro-Rodriguez told the Manitoban.

“I hope that it does get [used as lecture material] in classes and used for further research […] It would be nice to do a follow-up study, maybe in 10 years, to see how language changes.”

Adapting to Winnipeg with art