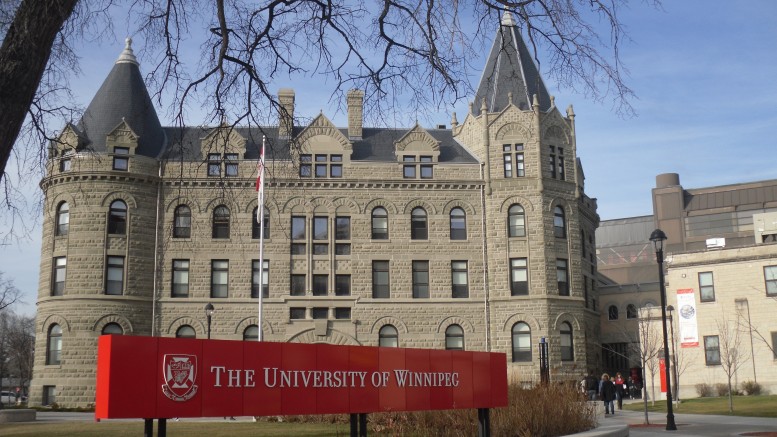 This past weekend, the University of Winnipeg Students’ Association (UWSA) sent out an ill-advised press release condemning military recruitment activities held at the campus’s RecPlex soccer pitch as part of the 103rd Grey Cup celebrations.

The statement, which has generated significant controversy, borders on the incoherent. It outlines vague concerns regarding the conflation of sport and war, as well as patronizing nonsense about the potential triggering effects of having a CF-18 cockpit and an armoured jeep on campus.

Apparently, the sight of some light military equipment, as well as unarmed military personnel playing with little kids on a soccer pitch, is enough to send a significant number of students into a state of traumatic shock.

It is striking that these concerns are rarely raised by the so-called traumatized students themselves. After all, they are far more useful as nameless pawns for the advancement of the UWSA’s ideological agenda.

Peyton Veitch, the president of the UWSA and the recently elected national treasurer for the Canadian Federation of Students, was quoted as saying “militarism is not a game, and does not belong at our university.”

The union was effectively implying that military personnel had no place in an institution of higher learning, generating outrage on social media.

In response, the UWSA sent out a mealy-mouthed “clarification.” In it, they claimed that they “have too much respect for the risks and trauma faced by soldiers, their families, and civilians who have experienced combat, to support making games out of war.”

Veitch told the Winnipeg Sun that the UWSA has no problem with military recruitment on campus as long as it emphasizes “search and rescue work.” But as early as last month the union was attempting to drive away military recruiters from the University of Winnipeg.

In October, the student union participated in a protest that involved students encircling Canadian Forces recruiters, screaming and chanting at them in an attempt at intimidation. Security eventually broke up the protest. With no apparent sense of irony, Veitch complained that campus security behaved in a “disproportionate and heavy-handed” manner.

In short, the UWSA has too much respect for soldiers to have them anywhere near the University of Winnipeg.

While free societies can certainly have healthy debates about the appropriateness of military symbolism during sporting events, banning military recruitment from university campuses – whether they are handing out leaflets or engaged in fun activities for kids – would undermine the pluralistic values at the heart of post-secondary education. Moreover, it is patently disrespectful to those who have fought and died defending those values.

A degree from the University of Winnipeg doesn’t preclude anyone from signing up with the Canadian Forces. And the student union is not the arbiter of which Canadian institutions are appropriate to celebrate on campus and which are not.

While the union may squawk about campus “corporatization” or, in this case, “militarization,” the corporation and the military remain viable and important institutions in our capitalist economy and Parliamentary democracy. Attempting to silence these institutions betrays a degree of ideological fervour that is, frankly, disturbing.

For the last several years, student unions and student activists across North America have been engaged in all manner of censorship meant to silence so-called offensive speech. More often than not, it is couched in language regarding the need for “trigger warnings” that can facilitate “safe spaces,” which are free from “micro-aggressions.”

The UWSA made ample use of this rhetoric when it successfully pressured the university to banish a travel company from campus in October. The company’s primary offence was daring to have images of women in bikinis and people in headdresses for Halloween in virtual reality tours used to promote its vacations.

It seems that everywhere we turn on the North American continent, post-secondary institutions are becoming the sole sanctuary of the shrill, naive, and easily offended. But student activists are also deeply entrenched in a new wave of left-wing political thought, inspired by post-modernism. In short, much of the soft “safe spaces” rhetoric is used to mask something more sinister – the censorship of anything that conflicts with the political views of student activists.

This was on full display during the union’s stance against military recruitment at the University of Winnipeg, both during the Grey Cup celebrations and earlier this year when they resorted to cheap intimidation tactics to drive our men and women in uniform away from campus.

But in order to fulfil its mandate as an institution of higher learning, the University of Winnipeg cannot allow itself to become the ideological fiefdom of the student union. I hope that the university’s administration has voiced sincere misgivings about the union’s stance on this issue. And I sincerely hope the UWSA will see the error in its ways, stand up for pluralism, and save the dogmatic rhetoric for undergraduate seminars.

He came. He saw. He gaffed.