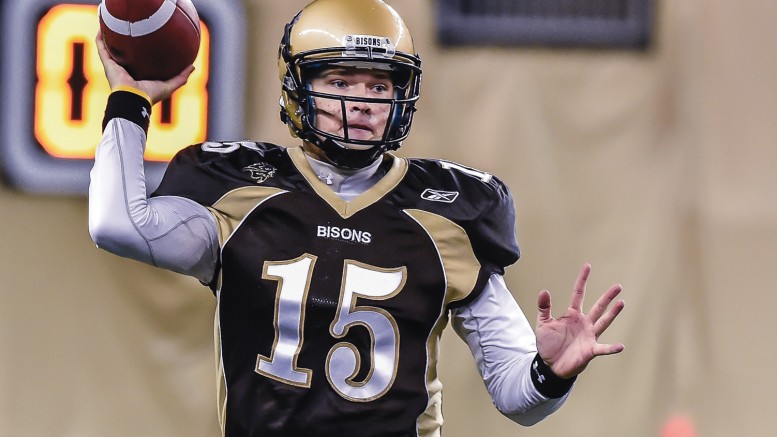 The University of Manitoba Bisons football team entered UBC for the final regular season game of the season on Saturday afternoon, hoping to leapfrog over their opponent in the standings and grab the number two seed in the conference. Ultimately, though, it was the Thunderbirds who came out on top 24-10, advancing to 6-2 and securing their first home playoff game since 2011-12.

With the loss, the herd fall to 5-3 and will travel to British Columbia once again next Saturday as the third seed.

The play from the pivot position made a huge difference in this game, as UBC quarterback Michael O’Connor outperformed Bison sign-caller Foster Martens, making his second consecutive replacement for injured starter Theo Deezar.

Martens finished the day with just 82 passing yards along with three interceptions – two from defensive back Stavros Katsantonis – and was yanked from the game just before the start of the fourth quarter.

O’Connor didn’t have the best day either; he threw two interceptions, but was still able to control the pace of the game for his squad. He ended with 219 yards through the air and was also effective on the ground, churning out four carries for 62 yards and a touchdown.

Turnovers also played a critical role in the outcome of this game, with four from both sides. Half of the giveaways occurred in the first quarter, with each team coughing the ball up twice in their first three possessions, effectively limiting any form of rhythm offensively.

The biggest turnover of the game occurred with 8:40 left in the opening quarter.

After Bison halfback Jayden McKoy put his offence in great field position with an interception on an overthrown pass by O’Connor, Manitoba was poised to put the first points on the board.

Starting at the UBC 45-yard line, Martens marched his team into the red-zone on a drive that included two third-down conversions. Just when it looked like the herd would take the lead, Martens showed his inexperience, rushing a pass over the middle that was intercepted by Riley Jones.

The Thunderbirds went on to score a major on the ensuing drive, thanks to some poor tackling that led to a 14-yard Marcus Davis touchdown rush. The home side’s touchdown took the wind out of the Bisons’ sails and they were never able to bounce back, playing from behind for the rest of the game.

Manitoba trailed 14-3 at halftime, and began relying on the run game in the second half after two interceptions by Martens in opening 30 minutes.

While their defence – led by DJ Lalama with eight tackles and Brett MacFarlane with two forced fumbles – allowed just 10 points in the final two quarters, their offensive strategy simply didn’t pan out. Jamel Lyles was held to only 55 yards, while Alex Christie had just 47.

The Bisons frequently started from the shadow of their own goalposts in the third and fourth quarters and despite stacking seven players on the line, they still weren’t able to move the ball past the 40-yard line for the most part.

The herd’s lone offensive highlight occurred late in the fourth quarter as true freshman Billy Hart guided the team downfield, using his legs to pick up first downs as well as finding receivers Bryden Bone and Dustin Pedersen for gains of 21 and 17 yards respectively.

Running back Cameron Fox finished the drive off with a one-yard touchdown plunge to bring the Bisons back to within a single score, at 17-10.

The comeback fell short, however, as UBC running back Brandon Deschamps put the game to bed on the following drive, with a 50-yard major on the ground.

Manitoba heads back to Thunderbird Stadium at 2 p.m. this Saturday, and will look for their first win of the season against UBC. The Bisons have a 3-1 record over the last two Canada West playoff campaigns, and will also likely have Deezar back under centre to help lead the charge.

Looking into the future

U SPORTS and CFL missing an opportunity

Turning back the fantasy clock