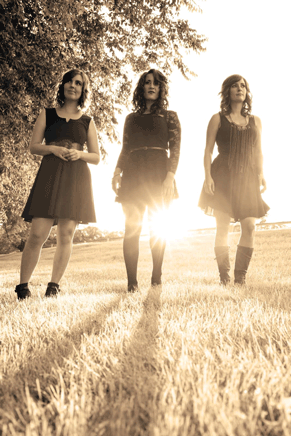 The West End Cultural Centre will reverberate with an enchanting sonic wave on Friday, Nov. 20. Such is the effect of the music on Sweet Alibi’s new album, Walking in the Dark.

Fresh off the successful tour of their sophomore album We’ve Got To, Sweet Alibi is set to release their third album this weekend.

Sweet Alibi is Amber Quesnel, Jess Rae Ayre, and Michelle Anderson. All three core members provide vocals and at least two instruments apiece. The local folk/roots trio burst onto the Winnipeg folk music scene in 2009 and since then, they have broadened their horizons, singing their way into music libraries across the country.

Over the years, the group has blended their folk basis with pop, roots, country, and soul music. This has resulted in a catalogue of soothing, piquant music.

“I think we started out really folky but we have sort of moved into a pop-indie-folk thing,” said Quesnel.

“We really don’t overthink it when we are writing, we write songs that are coming from our hearts and go from there.”

The band’s last album was acclaimed both in Winnipeg and across the country. We’ve Got To earned Sweet Alibi a countrywide tour as well as nominations and awards from the Canadian Folk Music Awards and Western Canadian Music Awards (WCMAs). The trio was even named Roots Group of the Year at the WCMAs.

“We were not expecting to win [at the WCMAs]. We were in a category that had people who had been in the industry for years […] We were just happy to be nominated,” said Ayre.

“It was really exciting and it was nice to be recognized within the community. We don’t do this just to win awards, but it is nice to know that all the miles you put on the road are being heard.”

The recognition and accolades only spurred them to work harder in the production of their latest album.

“You want to live up to what your fans are expecting. We put a lot of time and effort into writing the songs and making them something that we are proud of,” said Ayre.

Sweet Alibi’s Walking in the Dark is a musical expedition of a wide range of emotions; especially those provoked by a life on the road. The first single off the album, “Showing You,” is a snippet of this experience.

“We thought ‘Showing You’ was a really universal song for people. It has a really good healthy message of being there for the people you love,” said Ayre.

“It takes on the whole theme of the album. It is also very powerful vocally.”

“[Murray’s] really good at taking parts of things that you like and making them better […] He’s really easy to work with,” said Anderson.

The upcoming show promises to be exciting and will feature performances from the band and several guests.

“We have been working very hard. We have a really cool opening act; they are called the Empty Standards. For us, we have got quite the production happening on stage [including] dancers and a children’s choir,” explained Anderson.

The three musicians are set to hit the road with their band following the release of the album. In the next few months, they will be touring across the country, and even playing a gig in Kansas City.

Sweet Alibi is performing on Friday, Nov. 20 at the West End Cultural Centre. Tickets are $20 in advance, $25 at the door. Advance tickets are available at the WECC, Music Trader, the Winnipeg Folk Festival Music Store, and online at www.ticketfly.com