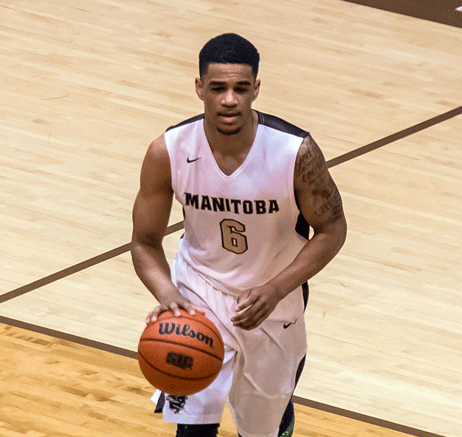 For two straight weeks, the University of Manitoba Bisons men’s basketball team has taken on a top 10-ranked team in the nation, and in both affairs, the herd have shown that they’re on the same level as the top tier teams in the Canada West conference.

This past weekend’s games were a phenomenal example, as Manitoba battled back-and-forth against a Calgary Dinos team that had 13 returning players from 2014-15 and were picked by many experts to win the conference this season.

Playing at home for the first time this season, the boys in brown and gold took the Dinos the distance – winning on Friday night 96-90 in overtime, before falling in the rematch 90-87, also in OT.

The opening game of the series was a tale of resolve for the Bisons. They found themselves down 38-34 at halftime and 59-53 after three quarters, but stuck to the game plan and generated well-rounded scoring to emerge victorious.

Power forward Wyatt Anders had himself a game, with 20 rebounds, while five Manitoba players finished in double digits in points – led by guard Justus Alleyn with 27.

It was a different tale for Calgary, as guard Thomas Cooper did pretty much everything for the Dinos offensively. The University of Nebraska-Kearney transfer had a game-high 38 points, including 22 at halftime.

Cooper was 13-of-26 from the field and 5-of-7 from the perimeter overall, but didn’t get a lot of help from his teammates as the visitors’ second-highest scorer was guard Jhony Verrone who only had 11 points.

Alleyn – tasked with defending Cooper one-on-one for the entire second half, did a great job of limiting the guard’s shot selection and forcing him to dish the ball off. Cooper had just nine points in the third and fourth quarter combined which helped the Bisons get back into the game and ultimately come out on top.

“I just noticed that he [Cooper] liked to go left a lot off of hesitation, so we tried to limit his looks going left to try and force him right because he seemed to be less comfortable and passed more going right,” Alleyn said postgame.

“I felt like if we could get it out of his hands and into other guys’ hands and make them make plays, we’d just get better defensive stops.”

That’s exactly what happened for the Bisons as they got themselves back into the game in the fourth thanks to Alleyn’s play at the baseline as well as Anders’s performance in the post.

The home side would go on to outscore the Dinos 16-10 in overtime, thanks in large part to their play at the line where they shot 82.1 percent overall compared to Calgary’s 60.9 percent.

Four of Manitoba’s starting five logged over 30 minutes of play overall, as well as Ilarion Bonhomme II who played 33 minutes and was critical off the bench in the second half, providing up-tempo play right when it was needed.

“I think [the starters] got into a good rhythm and we play well together,” Alleyn said. “We like to flow off each other so it just seemed to work out.”

The rematch saw improved play in the backcourt for the Dinos as starters Cooper, Torrez McKoy, and Verrone combined for 38 points and 25 rebounds. Jasdeep Gill and Josh Owen-Thomas also contributed off the bench with a combined 32 points.

The herd were led by their co-captains, as Anders had a double-double with 17 points and 13 rebounds, while guard AJ Basi had a game-high 32 points on 12-of-24 shooting from the field.

The Dinos, however, won the rebounding battle 62-52 and while Anders played admirably, he didn’t get much help from fellow big men Brett Jewell and Jonathan Alexander – who had just four combined rebounds.

After leading the fourth-quarter comeback in the previous night’s game, Bonhomme II was rewarded with 38 minutes of court time and much like Alleyn on Friday, kept Cooper at bay in the fourth, where he scored only two points.

Fouls became an issue late in the game as Alexander and Alleyn both exited with five for Manitoba, while forward Matt Ellis did the same for the Dinos. Both squads were in the bonus in the extra session and Calgary was able to penetrate inside just a bit more effectively, helping them to split the weekend set.

Manitoba will stay at home this Friday and Saturday, welcoming the Alberta Golden Bears to town. Game times are 8 p.m. and 6:30 p.m. respectively.