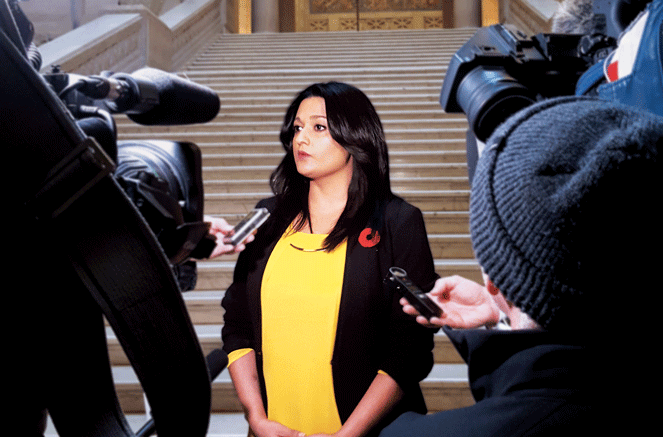 Five months before Manitobans are set to cast ballots in the 2016 provincial election, the Liberal party has its sights set on student debt.

The party has been releasing planks of its platform over the last few months and announced Thursday a plan to convert provincial student loans into non-repayable grants, which leader Rana Bokhari said would ease students’ transition from the lecture hall into meaningful participation in the provincial economy.

“It’s about time we kind of start paying attention to what our next 10 years looks like,” she said. “And I’m committed to making sure that students are walking out of university with their degrees in hand and are able to go out and purchase homes, go out and do what they need to do to build their families and not be so burdened by student debt.”

The Liberal promise goes a step further, eliminating the repayment burden on the provincial contribution, which Bokhari argued will open the doors of post-secondary education to students otherwise turned off by prospect of potentially long-term debt.

“There’s a lot of families out there that are just on the cusp,” she said “They know they can’t afford it but they really want their kids to go. It’s a struggle and it’s a very real struggle.”

“I think everyone needs a fair shot,” she added. “Let’s give students a voice. Let’s give them a chance. Let’s advocate for them and make sure that [we] give them the best push forward.”

In the 2015 provincial budget, more than $38 million was earmarked for Manitoba Student Aid, which includes loans, bursaries, grants and administrative costs.

The Liberal plan will convert the $10 million currently set aside for loans into non-repayable grants.

Additionally, Bokhari said the Liberals would get rid of a cap on how much money students can earn working while in school. Currently, students making more than $100 per week have their loans scaled back.

Progressive Conservative MLA Wayne Ewasko, who represents Lac du Bonnet and serves as the party’s education and advanced learning critic, wielded a sharp criticism and accused the Liberal leader of shopping for votes, saying she is making promises that won’t be easy to follow through on.

“It sounds like a great promise but to me it’s sounding unrealistic and to me it sounds as if she’s doing some vote-buying,” he said. “My stance on it is I don’t want to make a promise to people just to go and vote-buy and then not be able to back it up.”

When Progressive Conservative leader Brian Pallister unveiled his shadow throne speech Friday, there wasn’t specific mention of reforms to the student loan program. However, Ewasko said a promise to shave the provincial sales tax from eight to seven per cent and raising the basic exemption for income tax would leave more money in the pockets of students and parents.

He said he doesn’t foresee the Progressive Conservatives reinstating interest for student loans and noted the party is considering ways to expand access to grants and bursaries, both through potentially expanding the pool of available funds and looking at qualification criteria.

Michael Barkman, chair of the Canadian Federation of Students-Manitoba, which lobbied the province for interest-free student loans, said he is cautiously optimistic about the Liberal proposal, which he said could bring students from marginalized communities into the post-secondary fold.

“What we’re seeing is the students who can […] take on loans and take on that debt are going to school but those who are more debt-averse aren’t pursuing a post-secondary education,” he said.

“Typically, that looks like a lot of more marginalized communities – whether it’s indigenous people or newcomers. Those are the folks that are more debt-averse and aren’t pursuing a post-secondary education.”

Arguing a more educated workforce is a win-win scenario for the provincial economy, Barkman said it’s encouraging to see post-secondary education making waves on the campaign trail so early in the run-up to the spring election.

“To me it makes sense for our economy to open up post-secondary education to be as accessible as possible,” he said. “That way people are studying and then getting a job in Manitoba, rather than putting up barriers to education and making it more challenging for people.”

In its speech from the throne, delivered in the Manitoba legislature Monday, the provincial NDP government made no specific reference to student loans, except to say “post-secondary education should not be a debt sentence.”

The speech noted the government’s $150-million commitment to the U of M through the university’s Front and Centre Campaign and promised to provide “more up-front supports to students.”

A representative from the government was not made available by press time.