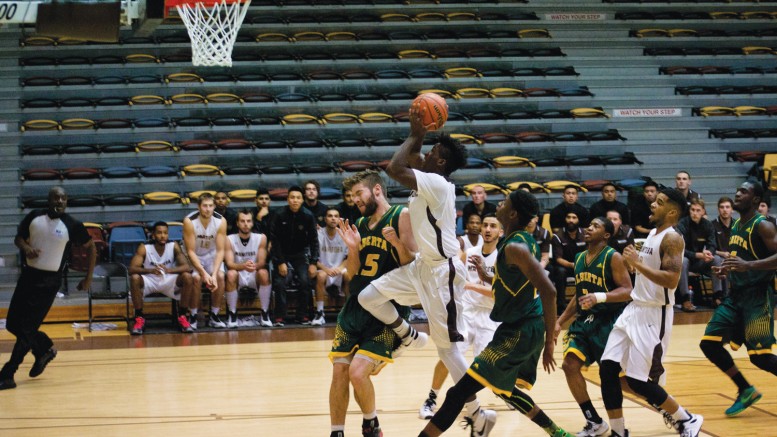 The University of Manitoba Bisons men’s basketball team completed their first sweep of the season last weekend, dominating the visiting Alberta Golden Bears defensively with scores of 90-68 on Friday and 74-61 on Saturday.

One of the biggest reasons for the herd’s success was their ability to shut down starting post players Brody Clarke and Brett Roughead. The seven-foot-one Roughead had just two points and two rebounds all weekend, while the six-foot-eight Clark was held to 12 rebounds.

Manitoba’s dominant power forward Wyatt Anders, on the other hand, registered 23 boards, while swingman Keith Omoerah pitched in with 11.

The opening matchup was close heading to halftime, with the herd leading by a slim 41-35. The Bisons pulled away in the third quarter though, outscoring Alberta 29-17 en route to the win.

Reserve Malik Irwin – who saw 28 minutes over the weekend – was a critical piece on both sides of the court for Manitoba, as fellow big men Brett Jewell and Jonathan Alexander ran into foul trouble.

Irwin totalled a season-high eight points in the first matchup, and was aggressive on defence all game long.

While Irwin was critical off the bench, the player of the game for the home side was definitely Omoerah, who totalled a game-high 29 points. He was 11-of-14 from the field as well as 4-of-5 from beyond the arc and seemed to get better as the game went along.

“We were just aggressive today,” Omoerah said after Friday’s game. “They were denying probably our most skilled scorer in AJ Basi, so other guys had to make plays today and we stepped up.”

The rematch was another defensive slugfest, with Manitoba surrendering no more than 16 points in a single quarter.

The difference came down to perimeter shooting, where the home side shot 55.6 per cent, compared to just 23.1 per cent for the visitors. Manitoba’s success draining threes came from the usual suspects, as Alleyn was 3-of-5, Omoerah was 2-of-3, and Basi was 4-of-7. Basi also led all scorers with 20 points.

The Bisons also got increased production from Jewell and Alexander. Jewell recorded eight points, while Alexander had five boards.

Another critical factor in this game was Anders’s mid-range shooting, where he was 4-of-8. The co-captain usually scores the majority of his points from the free-throw line, however he was forced to adjust on Saturday due to the Golden Bears’ zone defence inside the paint.

“I did know that they [Alberta] were going to double,” Anders said post-game.

“As soon as I did a nice move and I let that guy go by, boom another post defender was there and I was trying to find my partner Brett or Keith or Jon. I knew that the only way I was going to get buckets was off of mid-range, so I just started shooting it every time I saw it.”

While Alberta did an effective job limiting the inside game, they ended up being susceptible to the outside shot, and it showed in the final score.

The Bisons will now head on the road against Brandon to end the first half of the season. Game times are 8 p.m. Friday and 7 p.m. Saturday.