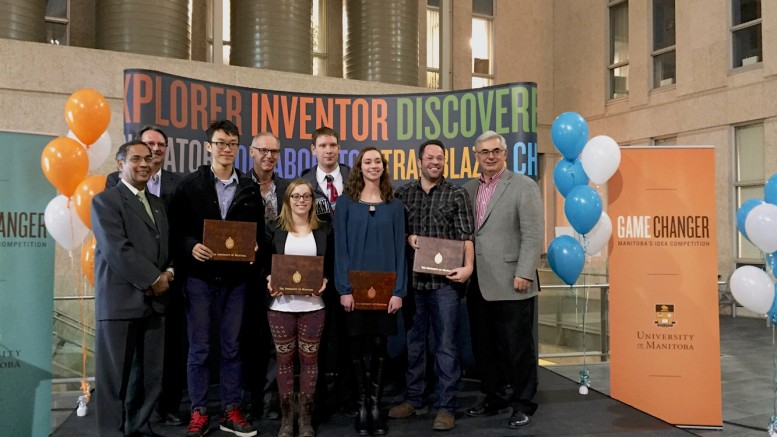 The entrepreneurial spirit of University of Manitoba students was stoked last week during the kick-off event for phase two of the Game Changer idea competition.

The competition, organized through the Stu Clark Centre for Entrepreneurship in collaboration with the research department’s technology transfer office, moved into its second phase with the unveiling of five winning problems at a ceremony in the Engineering building’s atrium Nov. 17.

The opening phase, problem identification, commenced in September with a call to university students and post-doctoral fellows to submit questions in teams or individually. The students or teams who submitted the winning problems were each awarded $500.

In his welcome address, Digvir Jayas, U of M’s vice-president research and international, described the competition as a stage for students to change the world through innovative solutions.

“Our students want to transform the world and it is rewarding to see how excited and committed they are using the Game Changer competition as the platform to achieve this,” he said. “This competition is about challenging our students to think in new ways for new perspectives and to work together to find solution to the biggest problems they can imagine.”

Darren Fast, director of the research department’s technology transfer office, told the Manitoban the five problems were selected from a field of nearly 80 submissions and were chosen based on their potential real-world applications.

“We were looking for a problem that was not really being addressed by anybody,” he said. “And in every case you can find some people who are starting to work on the problem but there is not a good solution for it right now. It is still a real problem.”

“Something that is big and has real impact on people was a criterion, something that seems like there might be a solution for it.”

The second phase of the competition will see teams of between three and five students made up from at least two faculties work to solve the problems. Teams looking to tackle one of the problems have until Dec. 11 to register online.

Solutions must be submitted on or before Jan. 25, 2016. As many as 10 proposals will move on to the final event where the top prize of $10,000 and a six-month professional mentorship will be announced.

“It is applying your academics to the real world, to come out with real life solutions,” he said. “You will find out that our judges that will be here in February are all going to come from real walks of life – entrepreneurs, successful business owners. It is not going to be academic but entrepreneurial but you need that [academic] foundation anyways.”

Ken Oliver, whose problem questioning how to bolster academic creativity within the current educational regime netted him a $500 payday, said he wants to leave an impression on the school.

“My problem actually came from my experiences on campus,” he explained. “I was very surprised that in certain parts of my degree, I was mostly required to memorize information and it really does not show that you are able to use that information effectively.”

“I just want to change something locally, it does not have to change the world – I would just like to leave my mark on the U of M.”

Where do oceans come from? Just ask Herschel

Communication, not competition, is at the heart of 3MT