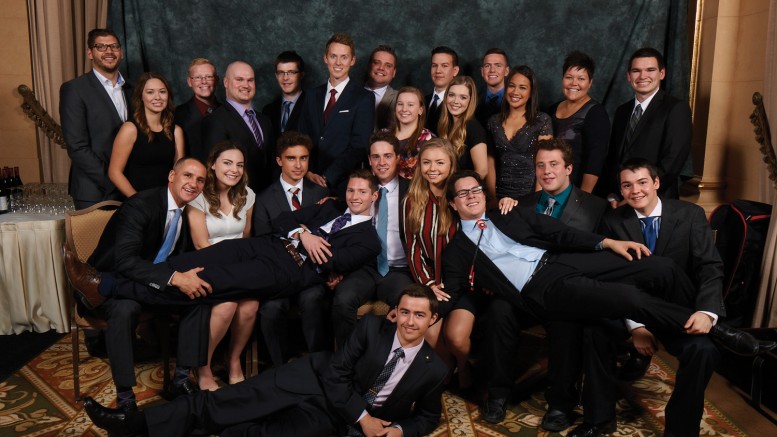 A group of students at the University of Manitoba’s Asper school of business is working to make it easier for Aboriginal graduates to step into the world of business.

The Association of Aboriginal Commerce Students (AACS) has been active on campus for several years and seeks to promote Aboriginal participation in business education through events intended to spread awareness about Aboriginal issues and causes.

The AACS is unique in that it represents a specific ethnic group within the broader community of U of M commerce students.

According to Ashley Richard, AACS president and fourth-year commerce student majoring in Aboriginal business studies, the group is necessary in order to both encourage Aboriginal participation in business and to facilitate networking among Aboriginal students and entrepreneurs.

“Asper, when you walk in, you don’t get this big indigenous welcome,” Richard said.

“So [we’re] trying to just break through any intimidation that Aboriginal students might have.”

There are many barriers for Aboriginal people looking to get involved in business or to improve their communities through business development, according to Richard, and she said she hopes the AACS can help break down those barriers.

“Aboriginal business background is just really lacking,” she said. “There are a lot of social movements that fail, I think, because they don’t have a proper model behind it.”

“If you are lacking in a business background, and you don’t really know the structure of how to run a successful business, or organizational theory, it’s really easy to fall apart.”

The latest initiative for the AACS is a year-long speaker series featuring various Aboriginal leaders in business and politics, which has spurred interest across the U of M campus, including the support of the University of Manitoba Students’ Union (UMSU).

The stated goal of the speaker series is to maintain and strengthen “indigenous/non-indigenous relations in the world of commerce.”

It started with a meeting between the dean of the Asper school of business Michael Benarroch, James Wilson, the treaty commissioner for the Treaty Relations Commission of Manitoba, Peter Pomart, director of the U of M’s Aboriginal Business Education Partners, and two students, including Laura Kiefer, the secretary for AACS and a fourth-year commerce student majoring in marketing and entrepreneurship.

“We all got together and spoke about some key initiatives that we think the Asper school should really look into relating to indigenous achievement and really foster a stronger indigenous community at the Asper school,” Kiefer said.

“What you would boil the three [key points] down to was job opportunities, a stronger sense of community, and a stronger curriculum.”

Kiefer told the Manitoban that the speaker series was meant to address two of these three pillars — namely, building a stronger community and facilitating job opportunities by giving students the opportunity to network with business leaders.

The first event, featuring keynote speaker James Wilson, was on the topic of connecting cultures in business. The second event, featuring Niigaanwewidam James Sinclair, the acting head of the department of native studies at the U of M, explored the top five issues facing indigenous communities in the aftermath of the October federal election. Each event includes opening remarks from an Aboriginal elder and youth leader.

The AACS is planning at least two other speaker series events in the new year, including a panel discussion on the possibility of a mandatory indigenous studies course at the U of M, likely in January, and a keynote address by Winnipeg Mayor Brian Bowman in February.

There is also the possibility that the AACS will partner with UMSU to bring Phil Fontaine, the former chief of the Assembly of First Nations and a long-time Aboriginal activist, to the U of M campus, likely in March.

“UMSU signalled a willingness to fund future speakers’ events,” said Jeremiah Kopp, UMSU president. “We haven’t at this point, but as the program expands we want to take an active interest in it and support it in any way possible, whether that is through time, financial resources, any way possible to ensure it’s a success.”

Kopp would not confirm Phil Fontaine would be coming to campus in March, but said he believes U of M students would be very interested in such an event.

He also told the Manitoban the panel discussion on a potential mandatory indigenous studies course at the U of M will likely constitute the beginning of a long-term discussion within the university community about the idea.

“UMSU hasn’t taken a strong position on an indigenous course requirement and I think that’s because there first needs to be that dialogue on campus,” Kopp said.

“We need to start grassroots conversations about that with the indigenous community, it has to be something that comes from the community in partnership with many different stakeholders.”

U of M obtains major funding for First Nations research