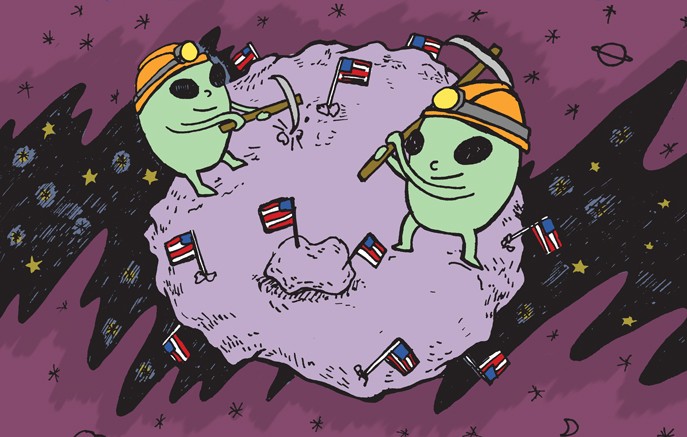 On Nov. 10, the United States Senate passed H.R. 2262, also known as the Spurring Private Aerospace Competitiveness and Entrepreneurship (SPACE) Act of 2015. What is interesting about this legislation is that it gives citizens the right to own resources mined from asteroids. It is also the legal framework for future space commercial endeavors.

It may sound like science fiction to some, but it is an effort by the U.S. government to encourage commercialization of outer space. The intent is to use competition to drive innovation in space-related technologies.

The importance of competition is that it will help bring down the cost of accessing space; this can be evidenced by the launch market, in which companies are currently competing to develop reliable, reusable rocket technology resulting in the cost of launching objects into space being reduced.

The space race during the cold war drove both the U.S. and Soviet Russia to compete in developing technologies to launch into orbit and then to the moon. While government entities still remain one of the most significant innovators in the space sector, private innovation could speed up the pace.

What is space mining?

Just as the name implies, space mining is the act of mining resources from objects in space. This could be the moon, other planets, or asteroids.

Resources on Earth are limited, and with growing economies and demands, running out of various metals or water will become a reality. These resources are needed for food production, electronics, infrastructure, luxury items, and the basic necessities of life, and they could be mined in space.

Additionally, space resources could help enable humans become an interplanetary species. Mined resources could build habitats on other planets and provide sources of water and fuel.

While space mining has yet to occur, there are already companies in existence which are currently developing technologies necessary to abstract resources in space. Planetary Resources and Deep Space Industries, which are both located in the U.S., are two such companies.

Some have reacted to the SPACE Act by saying that it violates the United Nations’ Treaty on Principles Governing the Activities of States in the Exploration and Use of Outer Space, including the Moon and Other Celestial Bodies – known more simply as the Outer Space Treaty.

The Outer Space Treaty was established in 1967 during the cold war and serves as the general framework for space legislation around the world today. It has been ratified by 104 countries, including the U.S., Russia, and Canada.

The part in the treaty that some people believe the SPACE Act contradicts is Article II, which states: “Outer space, including the moon and other celestial bodies, is not subject to national appropriation by claim of sovereignty, by means of use or occupation, or by any other means.”

What this means is that a nation cannot claim to own a planet, the moon, an asteroid, or anything else in space.

Whether space mining violates the Outer Space Treaty depends on whom you ask.

One opinion is that space mining is a peaceful use of space, and as long as there is no interference of other individuals, companies, or nations from doing the same, mining resources does not explicitly violate the treaty.

Another view is that space mining violates Article I of the Outer Space Treaty, which states: “The exploration and use of outer space […] shall be carried out for the benefit and in the interests of all countries, irrespective of their degree of economic or scientific development, and shall be the province of all mankind.”

The mining of resources most likely will only benefit whoever is mining it, and not necessarily benefit all of mankind.

It is important to note that the SPACE Act recognizes the U.S.’ obligation to pre-existing treaties and outlines that commercial space activities should not interfere with any other activity in space.

Space law and policy remains a largely complicated matter. In this age of increasing technological ability, it will likely continue to be a politically precarious subject for years to come as people from all walks of life strive to explore the final frontier.