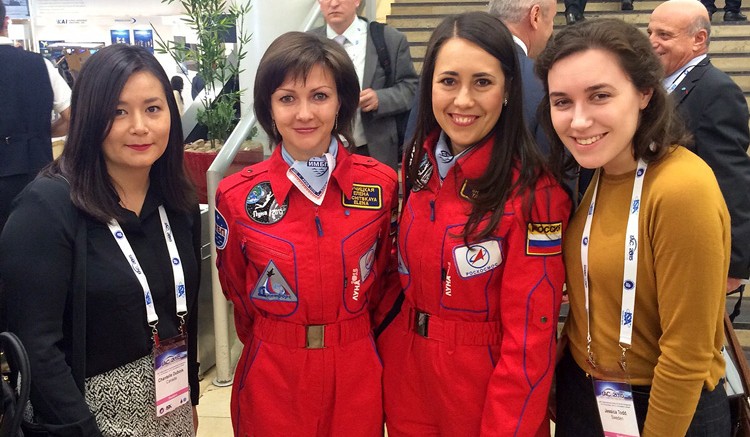 I travelled from Vienna to Jerusalem for the Space Generation Congress (SGC), held Oct. 8 to 10, and the International Astronautical Congress (IAC), held Oct. 11 to 16. This was my second time attending both of these conferences, and like last time, I left feeling incredibly inspired, excited, and motivated to continue searching for my place in the space sector.

The SGC was held at the Bloomfield Science Museum in Jerusalem, and 126 delegates from 41 countries participated. These delegates, who were students and young professionals between the ages of 18 and 35, were selected competitively based on applications to attend. They came from a variety of professional and educational backgrounds, including law, policy, engineering, science, and business.

The delegates were separated into one of five different working groups covering several different perspectives and topical issues: nanosatellite policy, space exploration, space Internet, Earth observation for climate change monitoring and management, and supporting the growth of entrepreneurial activities in the space sector.

Subject matter experts guided the discussions of each work group, and the results will be eventually compiled into a formal report and presented to the United Nations Committee on the Peaceful Uses of Outer Space technical subcommittee.
I had signed up for the nanosatellite policy work group, but spent most of my time assisting the organizing team with various tasks throughout the event.

I did occasionally drop in to try and participate in the ongoing discussion on how to manage the increasing accessibility of low Earth orbit for nanosatellites being launched by non-commercial entities. The results of this discussion I have to save for the SGAC to report on, but the work group developed very interesting recommendations on the matter.

One of the presentations that I found most interesting came from Kiyoshi Higuchi, who is the president of the International Astronautical Foundation and vice-president of the Japanese Aerospace eXploration Group (JAXA). He presented work on cosmo-anthropology, detailing how various aspects and philosophies of human culture would change once we become a multi-planetary species. This touched on things like how humans would no longer identify nationally, but by their planet (instead of a Canadian, I become an Earthling), the concept of up and down would change, and table etiquette would become different in zero-gravity environments. It is always interesting for me, as an engineering student, to hear about the perspectives of other disciplines.

At the end of the third day of the congress, a gala dinner was held at the Belgium House at the Hebrew University of Jerusalem. The dinner was sponsored by Lockheed Martin and had the heads of NASA, the European Space Agency, the Italian Space Agency, the Israeli Space Agency, and various important figures from Lockheed Martin in attendance.
The keynote speakers for the gala dinner were Wanda Sigur, vice-president and manager of civil space at Lockheed Martin, Jan Wörner, director general of the European Space Agency, and Charles Bolden, administrator of NASA. They all spoke on the importance of the next generation of space leaders and explorers and of international collaboration in future space missions. The latter point would be a common theme in the IAC that followed.

Although the SGC was now behind me, the five-day IAC would prove to be just as busy. The IAC welcomes roughly 3,500 delegates per year from a diverse range of backgrounds in academia and industry. For five days, various panels, presentations, receptions, and special events are held, this year centering on the theme “Space – The Gateway for Mankind’s Future.”

Throughout the week I felt as though I was constantly zipping from one end of the International Conference Center to the other, attending meetings and talking to people. One of the main events held every year at the IAC is the Heads of Agencies plenary. This year representatives from the U.S. (NASA), Russia (ROSCOSMOS), China (ISRO), Europe (ESA), Japan (JAXA), and Israel (ISA) were present. Earlier this year, Sylvain Laporte assumed the role as the president of the Canadian Space Agency, succeeding Luc Brûlé and General Walter Natynczyk. However, he was absent from the plenary so I assumed that it was possible he did not make it to the congress.

After the plenary, I headed to the SGAC’s booth in the exhibition hall. When I arrived I was informed that the president of the Canadian Space Agency had stopped by to ask about our work mere moments before I had arrived.

When I had heard that he was in fact at the congress, I immediately took to searching for his contact information to try and arrange a meeting. I had no real agenda other than to introduce myself to him, and sent an email simply asking if he was willing to meet sometime during the congress. I figured the worst that could happen was that he would decline.
I was pleasantly surprised when he responded that same afternoon. We arranged a meeting for the upcoming Wednesday. I decided to contact other Canadian university students from the Canadian Satellite Design Challenge who were also at the IAC that week and invited them to join.

The meeting with Laporte went very well. Students from Concordia University, two of my colleagues from the University of Manitoba, and one fellow SGAC member from the International Space University joined me. The majority of the discussion revolved around our participation in the Canadian Satellite Design Challenge and our experiences as Canadian students with space ambitions.

Laporte spoke about reviving the agency’s outreach program, which had been slowly phased out over the years and has been virtually non-existent for a while. He also talked pragmatically about Canada’s role in future space missions, in collaboration with other nations.

I sincerely appreciated that Laporte took the time to meet with us, despite how informally I had contacted him. He exchanged business cards with us and joined us for a group photo before departing.

The next day I attended a reception where I ran into someone I knew as a judge from the Canadian Satellite Design Challenge. He does space-related work for Canadian Defence Research and Development, and he and I ended up having an insightful discussion about the job climate for Canadians looking for space work, space-related graduate education in Canada, and about the competition itself. He gave me a lot of advice about my future.

Near the end of the reception, Laporte joined us for some discussion unrelated to space. It was at that moment that I really felt like I had truly made the most out of this congress. I managed to connect with one of the most important figures in Canada’s space sector, and apparently left a good enough impression that he would stop by to talk to me.
I leave Israel now with a handful of business cards with new and fascinating connections, several Facebook requests from new friends located around the world, and many memories with familiar faces belonging to the Space Generation family. Most importantly, I leave feeling even more connected to the space industry.

Sudoku: Behind the scenes

The bookstore of the present is closing its doors