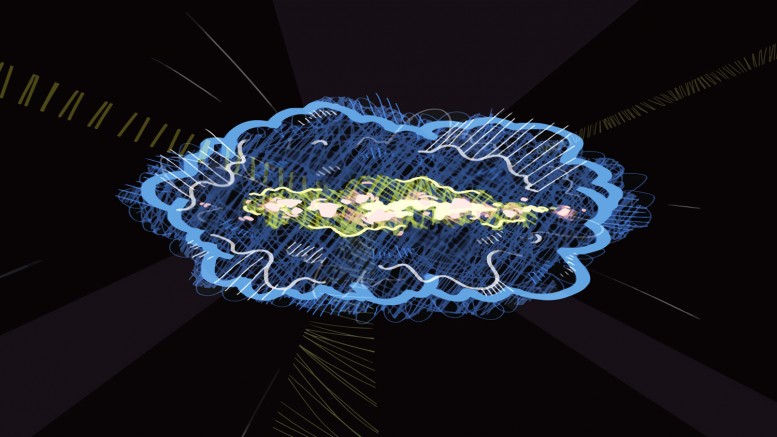 An international collaboration is shedding light, or rather radio frequencies, on the true shape of distant galaxies. Among those involved is the University of Manitoba’s own Jayanne English, associate professor in the department of physics and astronomy.

The Continuum Halos in Nearby Galaxies (CHANG-ES) survey uses the Karl G. Jansky Very Large Array (VLA) telescope in New Mexico to collect data on galaxies as close as 11 million light-years, and as far as 137 million light-years away.

The shape most people are familiar with when it comes to galaxies are the flat, two-dimensional spirals. When astronomers observe these galaxies, there appears to be nothing above or below this flat spiral.

This is because the galaxies are only being observed in the visible light spectrum. The CHANG-ES survey observes these galaxies in the radio frequency spectrum. The team discovered that a radio halo exists all around the visible spiral after observing 35 different galaxies.

The radio halo is created by the noise emitted by cosmic ray electrons moving around in the galaxy’s magnetic field at the speed of light.

The recently upgraded telescope enables scientists to collect data on faint radio light surrounding the observed galaxies, which create a halo cloud that has otherwise been invisible to observers.

In order to observe these clouds, galaxies were viewed edge-on to help distinguish the galaxy from its halo.

English scaled 30 images from a selection of 35 galaxies, and stacked them to see the typical distribution of the radio halo.

“From the median image of the galaxies made from the radio data, you can see the large vertical extent away from spiral disks that is otherwise invisible in optical wavelengths. It shows that these radio halos are not just associated with a few galaxies, but rather are a more common property,” English said in a U of M news release.

The team also found evidence that the density of the radio light halo correlated with the star formation rates; the larger the halo, the higher the star formation rate surface density, the measure of how many stars are born per year in a region of a galaxy. This, along with other measurements, could help astronomers determine the age of observed galaxies.

The results of this survey will help astronomers and physicists answer questions about the evolution of galaxies, the formation of stars, as well as their magnetic field structures.

The observation of radio halos confirms theories and predictions of the VLA’s namesake, Karl Jansky, on cosmic-ray halos. His predictions date back to to 1961 and are described in his book The Origins of Cosmic Rays.

Jansky is known as the father of radio astronomy, and was the first to detect radio frequencies of extra-terrestrial origins in the 1930s, mostly by accident.

Working for Bell Telephone Laboratories, Jansky set out to determine what was disturbing transatlantic radio-telephone communications.

After collecting data for seven months, he discovered weak 20 MHz static, which he eventually learned was coming from the centre of the Milky Way. Jansky would eventually complete his master’s dissertation on star noise.

Radio astronomy also led to the discovery of the cosmic microwave background radiation, which is considered one of the most essential pieces of evidence for the Big Bang theory.

The unit of measurement for the strength of an astronomical radio source has also been named in Jansky’s honour.